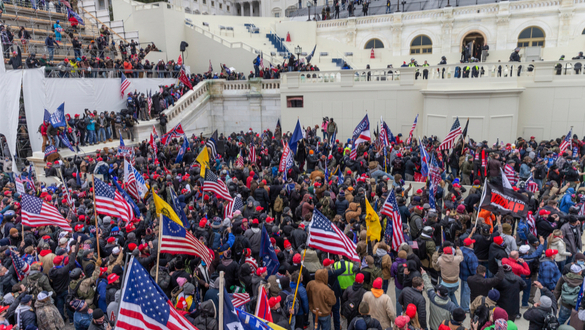 Federal prosecutors have arrested Stewart Rhodes, the founder and leader of the extremist group Oath Keepers, and 10 of his alleged accomplices on charges of seditious conspiracy.

The question as to when key players on January 6, 2021, Capitol insurrection would start being arrested attack has finally been answered. This arrest should have the former, disgraced and defeated former president and his accomplices crapping in the pants.

Rhoades was at the Capitol on Jan. 6 but has insisted he did not enter the building. Still, it's fair to say he is the most high-profile person charged in the Jan. 6 investigation to date.

The far-right Oath Keepers organization leader and ten others were charged with seditious conspiracy and could face decades in prison if convicted.

The Department of Justice issued a press release that states:

"The seditious conspiracy indictment alleges that, following the Nov. 3, 2020, presidential election, Rhodes conspired with his co-defendants and others to oppose by force the execution of the laws governing the transfer of presidential power by Jan. 20, 2021. Beginning in late December 2020, via encrypted and private communications applications, Rhodes and various co-conspirators coordinated and planned to travel to Washington, D.C., on or around Jan. 6, 2021, the date of the certification of the Electoral College vote, the indictment alleges. Rhodes and several co-conspirators made plans to bring weapons to the area to support the operation. The co-conspirators then traveled across the country to the Washington, D.C., metropolitan area in early January 2021."

These indictments and arrests are a major turning point in the prosections of those involved in the Jan. 6 attack on the U.S. Capitol. For the first time, it reinforces the DOJ's official recognition that the event is legally an assault on the U.S. government. By arresting these individuals and charging them with "seditious conspiracy," the DOJ publicly acknowledges for the first time that Jan. 6 was a "coup" and "sedition."

It also demonstrates that the Department of Justice is working its way up to those responsible for organizing and funding the Jan. 6 coup attempt and is starting to prosecute people who may have been behind the insurrection but did not set foot in the capital. President Trump and many others who conspired to stage the Jan. 6 violence and those who conspired after the election to fraudulently alter the free and fair election results might be arrested as a consequence of this simple shift in direction.

While these arrests are a big shift, there had been an earlier indictment that charged 19 people of the same extremist group that alleged they were involved in a conspiracy and aided and abetted the obstruction of the official business of Congress. So, two of those individuals have pleaded guilty and agreed to cooperate with federal investigators. The rest have pleaded not guilty and are preparing for trials later this year," according to the Washington Post.

Included in this indictment of Rhoades and his accomplices is the accusation that after breaking into the Capital building during the insurrection, they went south from the rotunda, walked to the House of Representatives, and were explicitly searching for House Speaker Nancy Pelosi.

According to the newly unsealed indictment against Rhoades and the ten other Oath Keepers, they went to Washington D.C. for the explicit purpose of intimidating lawmakers out of certifying the results of the 2020 election.

Joyce White Vance, a former federal prosecutor, appearing on MSNBC, voiced the opinion that none of these indictments would have been filed if the Federal prosecutors didn't have all of the evidence needed.

Another experienced legal expert Marcy Wheeler expressed the opinion that Rhodes led many other militia members to believe that an Insurrection Act would be declared after Jan. 6.

NBC News White House Correspondent Josh Lederman expressed skepticism that Rhodes will have any luck negotiating a plea bargain. His only chance of getting a deal is if he has direct, incontrovertible evidence to give the Justice Department that exposes one or more officials at the White House or a member of Congress.