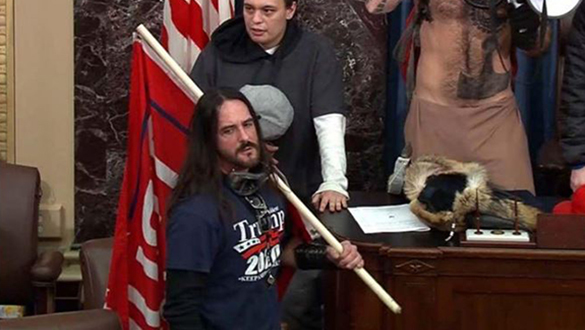 FBI Photo of  Paul Allard Hodgkins, 38, pleaded guilty for his part in the January 6, 2021 insurrection at our nation’s Capital.

Over 400 January Insurrectionists have been charged for the worst attack on the nation’s Capital since the war of 1812 with Great Britain. Most of those charged have been holding back from pleading guilty and negotiating plea deals in hopes that former President Donald J. Trump will somehow come to their rescue.

The second man from Florida, who wore a “Trump 2020” T-shirt and carried a Trump flag as he stormed the U.S. Capitol on January 6, finally plead guilty today in connection with the Capitol attack.

Paul Allard Hodgkins, 38, threw in the towel and has given up on any hope that the former president, who insists he will be re-installed as president by the end of August, will save him from having to go to jail for his taking part in the insurrection.

Hodgkins pleaded guilty to one count of obstruction of an official proceeding today, while four other charges were dismissed as part of a plea deal. Hodgkins told Judge Randolph D. Moss that he had been in mental health counseling through his employer since his arrest.

As part of the plea deal, Hodgkins has agreed to a statement of facts in the case read by a federal prosecutor. It is an admission by Hodgkins that he entered the U.S. Capitol building with a “dark t-shirt with the word ‘Trump’ in white letters” and “carried a red flag with ‘TRUMP 2020’ in white letters” and took “selfie-style” photos of himself inside the Senate chamber.

The statement is an admission by Hodgkins that he entered the Capitol building knowing that he wasn’t allowed inside and that he did so intending to obstruct the proceeding inside.

By pleading guilty, Hodgkins avoids the potential maximum sentence for the charge of up to 20 years in prison. Hodgkins (who the government did not allege engaged in any violence) will almost certainly receive a much shorter sentence of 15 and 21 months in prison.

Judge Moss, a federal judge, will determine the ultimate sentence, who will consider Hodgkins’ criminal history and other factors before imposing a sentence.

According to press reports…

“Hodgkins was arrested in Florida on a criminal complaint on February 16 after a witness who knew Hodgkins told the FBI he’d received a copy of a selfie Hodgkins posted on Parler that showed him on the floor of the Senate.”

According to public records, when Hodgkins was interviewed by FBI agents, he claimed he traveled to Washington alone by bus before the January 6 attack. After speaking with the FBI, Hodgkins was indicted by a federal grand jury on March 5 on five counts: obstructing an official proceeding, entering and remaining in a restricted building or grounds; disorderly and disruptive conduct in a restricted building or grounds; disorderly conduct in a Capitol building; and parading, demonstrating or picketing in a Capitol building.

Jon Schaffer, a heavy-metal guitarist, associated with the Oath Keepers, was the first of the January 6 insurrectionists who pleaded guilty to two counts in mid-May; the first plea deal negotiated.

Federal authorities have charged more than 400 defendants in connection with the Capitol attack on January 6. The law enforcement agency has said it expects to arrest 100’s additional members of the insurrection.

The FBI has received hundreds of thousands of tips in connection with the Capitol attack, and the unprecedented investigation has at times overwhelmed the FBI and cooperating law enforcement authorities.

While most federal criminal cases end in plea deals, the faith of these insurrectionists in former president Trump’s coming to their rescue has kept most of those charged from negotiating plea deals with the DOJ.

A large number of arrests has already put a strain on the federal courthouse in the District of Columbia. A situation that’s likely to get worse as many more plea deals are in the pipeline – as these insurrections realize the former president cannot help them escape federal prosecution.

The shift from total resistance to pleading guilty is coming to an end. The DOJ has indicated it is in discussions with others arrested for their part in the January 6 insurrection. We, therefore, are likely to see dozens and eventually hundreds of plea deals consummated between the DOJ and a number of prominent Capitol riot cases.

A DOJ attorney said Tuesday that they hoped to extend plea offers to several defendants charged in the Oath Keepers case in the coming weeks.