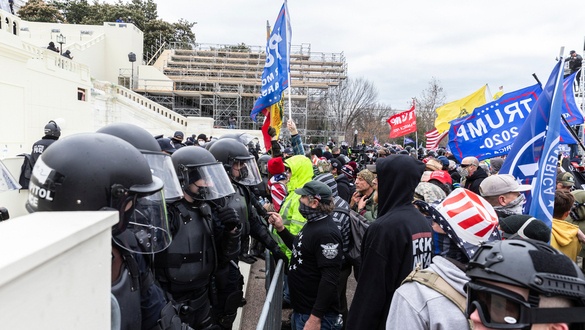 Following the discovery of new video and personal texts, a federal judge reversed the ruling of another jurist duped by a former sheriff's deputy from Tennessee. On January 6, 2021, the former Sheriff's deputy is accused of assaulting and dragging a Metropolitan DC police officer into a crowd of violent rioters at the US Capitol.

Ronald Colton McAbee, 27, was a Williamson County Sheriff in Tennessee until very recently. In fact, on January 6, 2021, McAbee was still employed by that Sheriff's department. McAbee and a friend traveled to Washington DC to join the mob at the Capitol on January 6, 2021. Once there, McAbee and six others assaulted a Washington DC police officer, according to the Department of Justice, which has released incontrovertible video and text messages.

Judge Emmet G. Sullivan, as a result of his review of the government's evidence, has issued an order requiring McAbee to remain in pretrial detention on December 21, 2021. The Judge cited evidence submitted by the government that McAbee was "excused from work" at the Sheriff's office due to a shoulder injury sustained during a recent car accident. According to a text submitted into evidence by the government, the 27-year-old Sheriff's deputy went to the doctor for CT scans and MRIs only two days before the January 6 assault on the Capitol. Yet, he was strong enough to text a friend he would go to Washington DC on January 6 and said…

"Let's link up and go. I'll slap a commie with this dead arm."

McAbee is now charged with taking part in a group of rioters who threw and swung various objects as weapons at the Capital and Washington DC officers guarding the entrance to one of the tunnels at the Lower West Terrace of the Capitol building.

According to the government charging documents, at approximately 4:28 p.m., Whitton and Sabol allegedly knocked an officer identified as "AW" to the ground. Whitton later reportedly boasted that he "fed an officer to the people."

The Department of Justice prosecutors allege that McAbee grabbed Officer AW by his left leg and torso while Mullins grabbed his left leg, and the two men dragged the officer towards the stairs. The government claims McAbee hovered over AW as he lay on the ground and screamed at other officers attempting to assist him.

When a Capital police officer identified by the DOJ prosecutors as "CM" pushed McAbee and hit him with a police baton, McAbee reportedly swung at him. At that point, Lopatic reportedly began punching CM, and McAbee turned his attention back to AW. McAbee reportedly grabbed AW by the torso, and the two men tumbled down the steps into the mob. The DOJ complaint goes on to say…as AW struggled to get to his feet, the mob reportedly kicked him, struck him with poles, and stomped him. They ripped off his helmet, stripped his baton and cell phone, and maced the police officer, who, as a result, had to go to the hospital with a laceration on his head that required two staples to close.

In an earlier ruling, Magistrate Judge Jeffrey Frensley in the Eastern District of Tennessee ruled that none of the government's evidence showed that McAbee took "offensive action" and that other evidence suggested Ronald Colton McAbee was in the area to "provide aid and assistance to individuals he saw who were in peril."

"To the contrary, Mr. McAbee appears to have acted deliberately when he fought against MPD officers who were attempting to protect the US Capitol and when he used physical force to pull an officer into the violent and angry mob. The government's video evidence captures multiple angles of the horrifying scene that unfolded that day."

"Watching the video footage of these events unfold continues to elicit horror and sadness — this was, without a doubt, a crime that is unparalleled in our nation's history,"

The DOJ prosecutor's government's case against McAbee includes the accusation that he tried to leverage his status as a member of law enforcement to get preferential treatment. According to the complaint, after the assault on the officers, the rioters surged back into the tunnel opening, pushing McAbee into the side of the archway and aggravating his preexisting shoulder injury from the car accident a month earlier.

Judge Sullivan noted in his order.

"As Mr. McAbee tried to get away from the surging crowd and through the police line, he pointed to the lettering on his vest that said 'SHERIFF' as he asked to be let through,"

After the January 6 assault on the Capitol, according to government evidence, McAbee reportedly texted pictures of an unidentified individual, three photos showing a bloodied baseball hat, and a head injury. The texts suggest McAbee viewed his actions on January 6 as a fulfillment of his Oath to the US Constitution, even as he strengthened his resolve to commit an insurrection against the American government.

"I've shed blood for my country. By the hands of the swamp, I will shed more in the days to come. But I will not forget the Oath I swore years ago to protect the America I once knew."

The texts exchanged between McAbee and a person identified by the DOJ as Associate-1 indicate that after January 6, the two men were preparing for an escalation of violence as the January 20 inauguration approached; McAbee texted on January 9. …

"Yeah, I've just put my go-bag in the car and told the girls to get ready. Idk what for. But be ready."

Other texts uncovered by the Department of Justice indicate that McAbee was following Lin Wood, the high-profile Atlanta defamation lawyer who spread conspiracy theories promoting the false claim that the election was stolen from Donald Trump.

The following day, McAbee asked his friend if he planned to go to the inauguration…

"It will be bullets this time there, currently 6200 National Guardsmen, several police agencies throughout the US, Snipers everywhere."

"I call for secession!"

Judge Sullivan wrote in his order that he was troubled by the fact that McAbee was employed as a sheriff's deputy at the time that "he participated in the riot at the US Capitol and physically assaulted MPD officers attempting to protect the building and members of Congress."

Sullivan approvingly cited the government's argument that McAbee's "occupation invested him with the responsibility to uphold and enforce the law. It also required an understanding of what constitutes a violation of that law. Yet, neither prevented the defendant from engaging in the assaultive, criminal conduct."

Even worse, Judge Sullivan concluded, McAbee allowed his mistaken belief that the 2020 election was stolen…

"…to override his sworn duty to uphold the rule of law as a law enforcement officer and even fight against officers with whom one would expect he held a mutual respect or kinship."

McAbee's texts clearly show he conspired with the violent intent to stop the official business of congress and to shed blood. His texts also support a criminal case against Lin Wood and support his disbarment. He is likely to face one of the longest prison sentences if convicted that will be handed out to the insurrectionists by any Federal Court trying these offenders. His call for succession displays a remarkable lack of remorse.