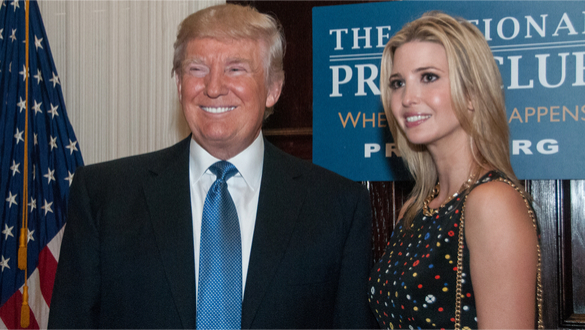 Ivanka Trump appeared before a House panel looking into the attack on the U.S. Capitol on January 6. As a pro-Trump mob stormed the Capitol, the former president's daughter and advisor was in the West Wing with him.

Ivanka Trump, former President Donald J. Trump's oldest daughter and one of his key aides, spoke for around eight hours on Tuesday before a House committee investigating the assault on the Capitol on Jan. 6.

The committee's reaction to her testimony wasn't immediately clear. Other witnesses have done the same with their answers to the committee's queries. There are reports that Ms. Trump did not seek to use protections like executive privilege or the Fifth Amendment during the questioning, unlike other witnesses who have done.

In accordance with evidence gathered by the committee, Ms. Trump was one of several White House aides who attempted to persuade President Donald Trump to call off the violence, which resulted in the injuries of more than 150 police officers and the evacuation of lawmakers Vice President Mike Pence. The former president's most radical fans, who distributed false information alleging massive fraud after the 2020 election and planned activities to maintain him in office, are not known to have had any association with her.

Earlier this month, Jared Kushner, her husband and a prominent advisor to President Donald Trump, appeared before the committee and offered what one-panel member characterized as "useful" and "helpful" information.

Ms. Trump and Mr. Kushner are two of the highest-ranking members of the Trump administration who have testified before the Committee on Oversight and Reform. Because the panel performs its business in secrecy, the public has been barred from attending the interviews.

Since January, the committee had contacted Ms. Trump's attorneys when the committee issued her a letter urging that she testify voluntarily. The committee said in a letter dated Jan. 20 that it had received information from Keith Kellogg, a retired lieutenant general who served as Vice President Pence's national security advisor. During the mob's encirclement of the Capitol, Mr. Kellogg highlighted President Trump's failure to denounce the violence, despite repeated requests from White House officials, including First Lady Melania Trump, to do so, according to the letter.

During his testimony, Mr. Kellogg said that the president had rebuffed pleas from him and Mark Meadows, his chief of staff, and Kayleigh McEnany, the press secretary for the White House. Mr. Kellogg then appealed to Ms. Trump for help, which she granted.

Additionally, Mr. Kellogg testified that he and Ms. Trump were present during a phone call in the Oval Office early on the morning of Jan. 6, during which Mr. Trump pressured Mr. Pence into agreeing with a plan to throw out electoral votes for Joseph R. Biden Jr. when Congress met to certify the Electoral College results officially. The phone conversation with Vice President Pence was made as part of an attempt to nullify the 2020 election and allow Mr. Trump a chance to remain in office.

The committee has examined more than 800 witnesses, and hundreds more are scheduled to be interrogated. The next day, Mr. Thompson informed reporters that he had allowed the issuance of five further subpoenas.

In response to "substantial information" received from two of Mr. Pence's aides, Marc Short and Greg Jacob, Mr. Thompson said that the committee had decided against issuing a subpoena to Mr. Pence.

A subpoena is not expected, Mr. Thompson said, adding that "we have been successful invalidating many of President Trump's and Vice President Pence's remarks without their particular testimony."

He said there has been "absolutely no attempt" on Mr. Pence's behalf to go before the committee. "We first felt it would be essential, but at this point, we know that individuals broke into this building and intended to hang him." As far as we know, he was required to be protected at an unknown place inside the Capitol by a security team. We are familiar with the individuals who attempted to persuade him to alter his opinion regarding the count and other matters. So, what exactly do we require?"

Mr. Thompson also said that the panel was unlikely to summon Mr. Trump as a witness, which Mr. Thompson supported.

"I'm not sure there's anything more we could question Donald Trump that the general public doesn't already know," Mr. Thompson said. "He had a four-year streak of running his mouth."