Is Vladimir Putin a War Criminal or is this the Perfect Crime? 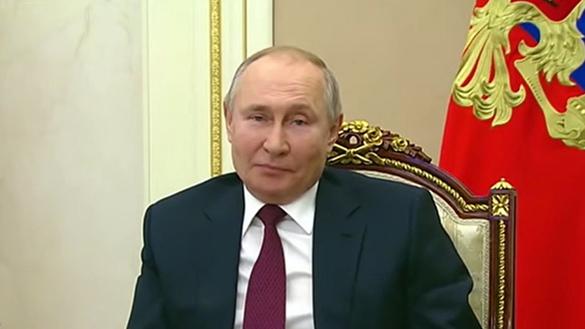 Putin has been labeled a war criminal by President Joe Biden for the invasion of Ukraine. Can Putin be brought to justice?

On Wednesday, President Joe Biden referred to Russian President Vladimir Putin as a "war criminal" for the ongoing attack in Ukraine, where defenseless civilians, children, women, hospitals, and maternity rooms have been targeted.

The remark came in response to a question from Fox News White House reporter Jacqui Heinrich, who had asked: "Mr. President, given all we have seen, are you ready to name Putin a war criminal?" Biden responded with his second response.

Biden first told Heinrich "no" when he passed her on the street. In the following moments, the president approached Heinrich and said he had misunderstood what she had asked the last time.

"Did you inquire whether or not I would contact Putin?" Biden made the statement.

"Are you prepared to refer to him as a war criminal?" Heinrich repeated it. Before stepping out of the meeting room, the president said, "Oh, I believe he is a war criminal."

In an interview with reporters shortly after, White House press secretary Jen Psaki said that Biden's "remarks speak for themselves."

However, just stating that someone is a war criminal is not enough to qualify them as one. To determine who is a war criminal and how they should be punished, established criteria and procedures must be followed.

Russia's relentless bombing of civilian infrastructure, including hospitals, apartment complexes, and schools, caused the Senate to vote a resolution asking for an inquiry into possible war crimes committed by Putin.

Sen. Lindsey Graham (R-SC) was the driving force behind the initiative.

I want to collaborate with our British partners and, perhaps, others to establish an intelligence cell that will make accessible to the public information on Russian military units involved in war crimes and begin identifying their leaders." It is being planned to launch a name and shame campaign," Graham stated.

Chuck Schumer (D-NY), Senate Majority Leader, applauded the chamber for banding together to "affirm that Vladimir Putin cannot escape justice for the horrors done against the Ukrainian people."

'The legislation that was passed today, championed by Senator Graham, sends an unmistakable message that the United States Senate stands with Ukraine, stands against Putin, and supports all efforts to hold Putin accountable for the atrocities perpetrated against the Ukrainian people,' Schumer stated.

The Kremlin has categorically denied striking people and has said that it solely targets military objectives.

Russia's military invasion of Ukraine was halted earlier Wednesday by the International Court of Justice (ICJ), which said that it was "profoundly worried" by force in the conflict.

Republican Sen. Lindsey Graham has reiterated his demand for the killing of Russian President Vladimir Putin, a statement that politicians from both parties in Congress have roundly criticized.

At a news conference on Capitol Hill, Graham expressed optimism that he'll be taken down…

"I hope he'll be taken out, one way or the other," Graham said during a press conference on Capitol Hill. "I don't care how they take him out. I don't care if we send him to The Hague and try him. I want him to go.

But how can the international community legally begin bringing Putin to justice?

The word refers to someone who breaches a set of international laws known as the law of armed conflict, approved by global leaders in 1949. In times of conflict, the rules of engagement dictate how nations conduct themselves.

They were derived from the Geneva Conventions, ratified in the wake of World War II, and from other subsequently added protocols. Those regulations have been updated and enlarged throughout the last century.

Certain weapons, such as chemical or biological agents, are illegal under international law. The laws are intended to safeguard individuals who are not participating in combat and those who can no longer fight, such as civilians such as physicians and nurses, injured soldiers, and prisoners of war, among others. Those who can be targeted and with what weapons are specified in treaties and conventions.

The "grave violations" of the treaties that constitute war crimes include deliberate killing, widespread devastation and appropriation of property that is not justified by military necessity, and wilful destruction and appropriation of property. In addition to willfully targeting people, employing excessive force, using civilians as human shields, and capturing hostages are also considered war crimes.

Additionally, crimes against humanity committed in the context of "a widespread or systematic assault intended against any civilian population" are prosecuted by the International Criminal Court (ICC). Murder, extermination, forceful transfer, torture, rape, and sexual enslavement are among the crimes committed.

Putin may be accused of being a war criminal is applying the well-acknowledged legal notion of command responsibility. The commanding officers of a military unit who order or know or should have known about crimes and do nothing to prevent them may be held criminally liable.

Four avenues may be used to investigate and judge war crimes; however, each has its own limitations. One option is to go via the ICC.

A second possibility is that the United Nations transfers its work on the investigation panel to a hybrid international war crimes tribunal, which would then indict Putin.

A third option would be for a collection of interested or worried governments and organizations, such as NATO, the EU, and the United States, to convene a tribunal or court to trial Putin. The Nuremberg Military Tribunals, which tried Nazi leaders, exemplify this.

Finally, some nations have their own rules for punishing those who commit war crimes, known as war crimes laws. Germany, for example, is already looking into Putin's activities. Although the United States does not have such a statute, the Justice Department does have a branch that focuses on actions such as international genocide, torture, recruitment of child soldiers, and female genital mutilation, among other things.

(a)Offense.— Whoever, whether inside or outside the United States, commits a war crime, in any of the circumstances described in subsection (b), shall be fined under this title or imprisoned for life or any term of years, or both, and if death results to the victim, shall also be subject to the penalty of death.

(c)Definition.—As used in this section the term "war crime" means any conduct—

(1) defined as a grave breach in any of the international conventions signed at Geneva 12 August 1949, or any protocol to such convention to which the United States is a party;

(3) which constitutes a grave breach of common Article 3 (as defined in subsection (d)) when committed in the context of and in association with an armed conflict not of an international character; or

(4) of a person who, in relation to an armed conflict and contrary to the provisions of the Protocol on Prohibitions or Restrictions on the Use of Mines, Booby-Traps and Other Devices as amended at Geneva on 3 May 1996 (Protocol II as amended on 3 May 1996), when the United States is a party to such Protocol, willfully kills or causes serious injury to civilians.

(A)Torture.— The act of a person who commits, or conspires or attempts to commit, an act specifically intended to inflict severe physical or mental pain or suffering (other than pain or suffering incidental to lawful sanctions) upon another person within his custody or physical control for the purpose of obtaining information or a confession, punishment, intimidation, coercion, or any reason based on discrimination of any kind.

(C)Performing biological experiments.— The act of a person who subjects, or conspires or attempts to subject, one or more persons within his custody or physical control to biological experiments without a legitimate medical or dental purpose and in so doing endangers the body or health of such person or persons.

(D)Murder.— The act of a person who intentionally kills, or conspires or attempts to kill, or kills whether intentionally or unintentionally in the course of committing any other offense under this subsection, one or more persons taking no active part in the hostilities, including those placed out of combat by sickness, wounds, detention, or any other cause.

(E)Mutilation or maiming.— The act of a person who intentionally injures, or conspires or attempts to injure, or injures whether intentionally or unintentionally in the course of committing any other offense under this subsection, one or more persons taking no active part in the hostilities, including those placed out of combat by sickness, wounds, detention, or any other cause, by disfiguring the person or persons by any mutilation thereof or by permanently disabling any member, limb, or organ of his body, without any legitimate medical or dental purpose.

(I)Taking hostages.— The act of a person who, having knowingly seized or detained one or more persons, threatens to kill, injure, or continue to detain such person or persons with the intent of compelling any nation, person other than the hostage, or group of persons to act or refrain from acting as an explicit or implicit condition for the safety or release of such person or persons.

(2)Definitions.—In the case of an offense under subsection (a) by reason of subsection (c)(3)—

(A) the term "severe mental pain or suffering" shall be applied for purposes of paragraphs (1)(A) and (1)(B) in accordance with the meaning given that term in section 2340(2) of this title;

(B) the term "serious bodily injury" shall be applied for purposes of paragraph (1)(F) in accordance with the meaning given that term in section 113(b)(2) of this title;

(C) the term "sexual contact" shall be applied for purposes of paragraph (1)(G) in accordance with the meaning given that term in section 2246(3) of this title;

(i) a substantial risk of death;

(iii) a burn or physical disfigurement of a serious nature (other than cuts, abrasions, or bruises); or

(iv) significant loss or impairment of the function of a bodily member, organ, or mental faculty; and

(ii) as to conduct occurring after the date of the enactment of the Military Commissions Act of 2006, the term "serious and non-transitory mental harm (which need not be prolonged)" shall replace the term "prolonged mental harm" where it appears.

(A) collateral damage; or

(B) death, damage, or injury incident to a lawful attack.

(5)Definition of grave breaches.— The definitions in this subsection are intended only to define the grave breaches of common Article 3 and not the full scope of United States obligations under that Article.

Law expert predicts when Putin will be indicted for war crimes