Is the Coronavirus a new Deadly Chinese Bio-Weapon That Escaped from a Research Lab? 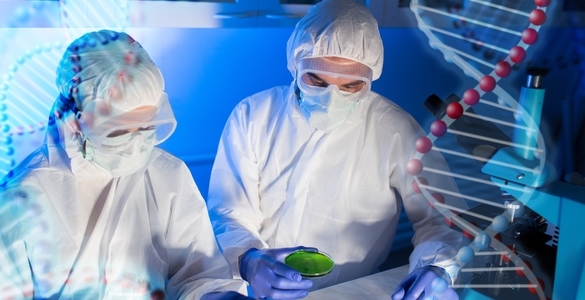 Chinese Scientists have confirmed the likelihood that the potentially deadly COVID-19 virus was created in a research lab 300 Yards from the Wuhan fish market.

In Stephen King’s book ‘The Stand’ the science fiction and horror writer begins the book with a deadly mistake in a U.S. research lab that exposes its staff by accident to a deadly virus that sets off alarms and automatically triggers a shutdown of the secured research facility. But not before one employee infected with the virus manages to escape the automatic quarantine by desperately crashing through a gate that surrounds the compound.

The lab employee who escapes is eventually overtaken by the virus while driving away during his escape and crashes into a diner along the roadside a few hours later. Those who witness the crash that came to his aid were exposed to the highly contagious and deadly virus and within several weeks, the world’s population is almost entirely wiped out.

The Stand was written as a parable of good versus evil and is only one of the hundreds of doomsday stories based on a deadly bio-weapon, or alien pathogen being accidentally released on an unsuspecting world as the direct result of bio-weapons research gone wrong.

As the death toll and numbers of people started to jump a few weeks ago, Arkansas U.S. Senator Tom Cotton, a graduate of West Point, voiced the opinion that the coronavirus from China could have originated in a military research or University laboratory used by the Chinese military to research bio-weapons.

Pushed to respond to speculation of Senator Cotton, a top White House official national security adviser Robert O'Brien said Tuesday that he had no information about any such theories. However, he did point out that…

"He's a smart guy when he comes to these issues, and he's a leader when it comes to national defense and national security issues,"

During a Senate Armed Services Committee hearing at the end of January, Senator Cotton refused to ignore the possibility and expressed the opinion that the coronavirus may have been developed by the Chinese government ⁠— which he said could be…

Chinese ambassador to the United States Cui Tiankai has criticized Cotton's suggestion in an interview with CBS News.,,

"It's very harmful; it's very dangerous to stir up suspicion, rumors and spread them among the people. For one thing, this will create panic. Another thing, that it will fan up racial discrimination, xenophobia, all these things, that will really harm our joint efforts to combat the virus,"

Anne Schuchat, deputy director of the Centers for Disease Control and Prevention, warned about the emergence of rumors in remarks at the National Press Club on Tuesday. She expressed the opinion that the virus was transmitted from animal to human, pushing back on the idea that it may have originated from a Chinese lab.

“Based on everything that I know about what is going on with this outbreak and the research that’s being conducted, as well as the genomic sequences that have been posted and the comparison with animal strains, the pattern that we’re seeing is quite consistent with emergence from animal to human acquisition and adaptability or mutations that permit the virus to be easily spread between people,”

Deputy Director of the CDC Anne Schuchat may be purposely trying to hide the true nature of the COVID-19 health crisis because of fear that China will continue to obstruct the CDC from both going to China to investigate the viral outbreak. Up to now, the Chinese have promised to allow U.S. CDC workers into Wuhan and to help track down how the virus was spread and how to stop it.

As for Senator Cotton, he reiterated his concerns in a CNBC interview Tuesday morning…

"We do need to ask questions about the super laboratory that is in Wuhan…There are too many unanswered questions and China has been too deceitful for us just to take the word of the Chinese Communist Party."

National security adviser Robert O'Brien helped feed concerns that the coronavirus is bio-weapon that has escaped a lab. O'Brien said as of Tuesday evening. The Chinese government was still not allowing medical doctors affiliated with the U.S. government to get access to Wuhan, the city most closely connected with the virus. According to O’Brien….

"We've offered the Chinese the opportunity to have American doctors from [the Centers for Disease Control and Prevention] and [the National Institutes of Health] and other experts come to China and help them…That offer has not been accepted at this point, but that's an outstanding offer."

The revelation that the Beijing-sponsored South China University of Technology has concluded that the potentially deadly coronavirus probably originated from a “laboratory in Wuhan” but leaves out the likelihood that the research was commissioned by the Chinese military to create a deadly bio-weapon.

This new bombshell paper from the Beijing-sponsored South China University of Technology says that the Wuhan Center for Disease Control (WHCDC) could have spawned the contagion in Hubei province.

The report also mentions that bats that are linked to coronavirus once attacked a researcher and 'blood of bat was on his skin.

The University report goes on to describe how the only native bats are found around 600 miles away from the Wuhan seafood market and that the probability of bats flying from Yunnan and Zhejiang provinces was minimal. This indicates there is little or any evidence that the local populace eats the bats, as evidenced by testimonies of 31 residents and 28 visitors.

Instead, the University report’s authors point to research being carried out within a few hundred yards at the WHCDC is much more likely the source of the potentially lethal virus’ spread. According to the report that one of the researchers at the WHCDC described quarantining himself for two weeks after a bat's blood got on his skin. That same man also quarantined himself after a bat urinated on him. 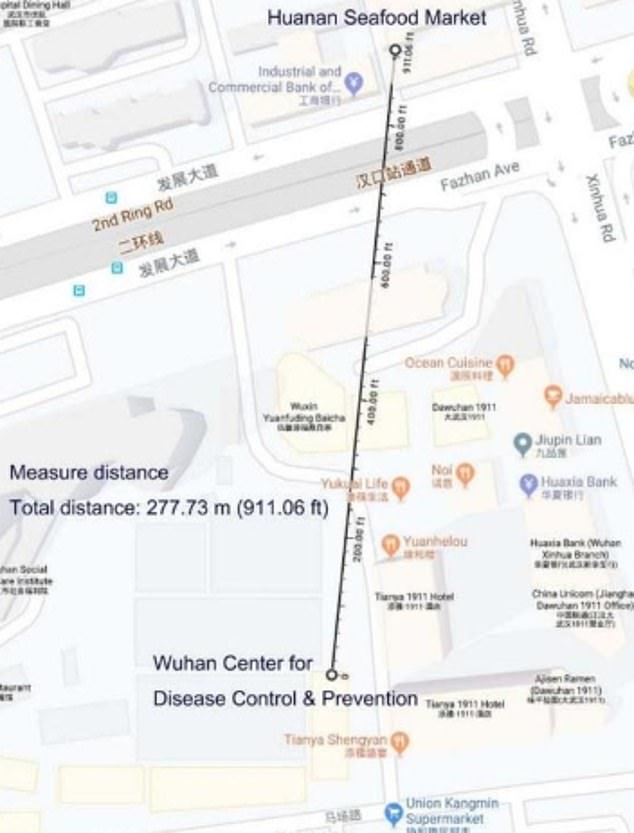 'The WHCDC was also adjacent to the Union Hospital (Figure 1, bottom) where the first group of doctors was infected during this epidemic.' The report says.

And he also mentions discovering a live tick from bat parasites known for their ability to pass infections through a host animal's blood.

'The WHCDC was also adjacent to the Union Hospital (Figure 1, bottom) where the first group of doctors was infected during this epidemic.' The report says.

'It is plausible that the virus leaked around and some of them contaminated the initial patients in this epidemic, though solid proofs are needed in a future study.'

And as well as the WHCDC, the report suggests that the Wuhan Institute of Virology could also have leaked the virus, as has previously been reported by MailOnline.

'This laboratory reported that the Chinese horseshoe bats were natural reservoirs for the severe acute respiratory syndrome coronavirus (SARS-CoV), which caused the 2002-3 pandemic,' the report says.

'The principal investigator participated in a project which generated a chimeric virus using the SARS-CoV reverse genetics system and reported the potential for human emergence 10. Direct speculation was that SARS-CoV or its derivative might leak from the laboratory.'

The report concludes that 'the killer coronavirus probably originated from a laboratory in Wuhan.'

It comes as the outbreak has infected more than 69,000 people globally, with 1,665 deaths in China - most of these in the central province of Hubei.