Is Sen. Graham Going to Face A Criminal Indictment? 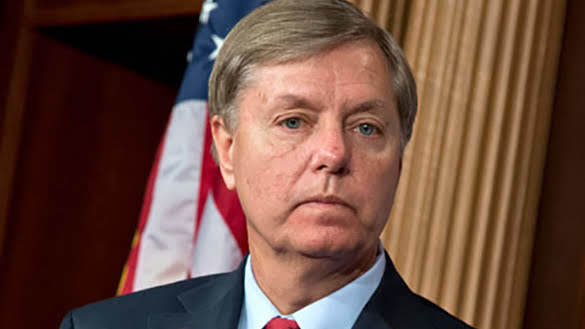 According to The Washington Post,  Georgia’s Republican Secretary of State, Brad Raffensperger, revealed in an interview that Sen. Lindsey Graham (R-SC) pressured him to toss thousands of 100% legal ballots.  Graham even suggested blocking entire counties from having their mail-in ballots counted.

We’ve poked fun here at Wall Street Rebel over accusations that Senator Lyndsey Graham is a cross-dressing homosexual who lives in a closet but is well known by Washington D.C. male prostitutes and likes to be called “Lady Graham.” His lifestyle isn’t a federal crime.  Everything we said was his hypocrisy to judge others, and his accusatory about-face since Senator McCain passed away.

His alleged attempt to illegally conspire to overturn the Georgia Presidential results is an entirely different issue. His knowingly pressuring Georgia’s Republican Secretary of State, Brad Raffensperger, to throw out 100% legal cast votes to fix the state’s election for President Trump and down-ballot Republicans sure sounds like a federal crime, even if Raffensperger refused to cooperate. The crime was the suggestion, and Raffensperger’s belief Senator Lyndsey Graham the Senate Judiciary Committee chairman, was pressuring him to commit the crime.

At the very least, if this is true, Senator Lyndsey Graham should be disbarred. The Washington Post reports…

“In the interview, Raffensperger … said he spoke on Friday to Graham, who has echoed Trump’s unfounded claims about voting irregularities.”

“Raffspenger said he was stunned that Graham appeared to suggest that he find a way to toss legally cast ballots,” said the report. “Absent court intervention, Raffensperger doesn’t have the power to do what Graham suggested, as counties administer elections in Georgia. ‘It sure looked like he wanted to go down that road,’ he said.”

Senator Graham’s office did not respond to comments other than to direct them to a letter from Republicans in Georgia criticizing the election process.  This non-response to an act of election deception reflects Graham’s contempt for his oath of office in which he swore to protect and defend the Constitution of the United States. What Raffensperger claims occurred was an attempt to pressure an elected official to fix a federal election.

The contempt to perpetuate this level of election interference furthers my belief that Trump has pretty embarrassing evidence on Graham.

Georgia is essential in the context of the 2020 election in that President-elect Joe Biden padded reached 306 electoral votes, which matches Trump’s 2016 win over the former Secretary of State Hillary Clinton, by carrying Georgia by a narrow 14,000 plus votes. Graham’s attempt at the election would have also impacted the two Georgia Senate races and down ballot results. It was so close that both Senate elections are advancing to runoffs to decide the Senate’s ultimate control.

Graham may have a high opinion of President-Elect Biden personally, but that’s not going to help him with the next U.S. Attorney General of the United States appointed by the new president. It also won’t prevent an FBI investigation into these events either - in my opinion.

Georgia’s secretary of state, Brad Raffensperger, will likely become persona non grata in the Republican Party but make no mistake about it; he’s a patriot. He didn’t bend to Graham or any other political pressure by the GOP to fix the election. Georgia’s people should take notice and re-elect him even if he needs to run as an independent or blue dog Democrat.