Is Ron DeSantis a Moron or Murderer? 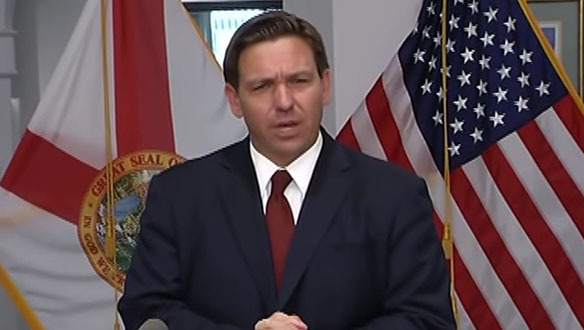 Florida's funeral homes are overwhelmed by Covid-19 deaths; the state's intensive care units are filled with a new record number of Covid patients in severe and critical condition. Yet, Republican Governor DeSantis brags about his success in dealing with this increasingly deadly pandemic.

Is Republican Governor Ron DeSantis of Florida a murderer or just a politically ambitious moron?

It's a question being asked by many Florida voters watching his war against science, banning both vaccine and mask mandates that have funeral homes overwhelmed and stacking bodies of the dead from the virus.

One of the ways to gauge the severity of a COVID-19 surge in a particular state or city is how busy funeral homes become — and in Florida, according to CBS News, employees of funeral homes are swamped.

The situation in Florida continues to worsen even after a month has passed since the Centers for Disease Control and Prevention reported that one in five new COVID-19 cases in the United States was occurring in Florida in July.

If their governor Ron DeSantis is a far-right Republican governor, many Floridians are now openly wondering if he's a moron or murderer.

A graduate of the U.S. Naval Academy, DeSantis, and former congressman isn't likely to claim scientific or mathematical ignorance. Yet, he has opposed social distancing measures, forbidden public schools from having mask mandates, and tried to score cheap political points with his MAGA base by railing against expert immunologist Dr. Anthony Fauci. The results have been deadly.

A Florida CBS News Reporter Khristopher J. Brooks explained in a recent report on the increasingly deadly policies of the want to be 2024 Republican nominee for president…

"In the last week of August, Florida hospitals averaged 279 deaths per day — up from 52 in July. Although not yet definitively linked to the coronavirus, the spike in fatalities is strongly suspected to stem from the ongoing surge in cases caused by the Delta variant. Overall, the state has reported a total of over 44,000 coronavirus deaths over the course of the pandemic, according to a New York Times tracker. COVID-19 has claimed so many lives in Florida that funeral directors said there aren't enough hours in the day to schedule all the services, a local TV station reported."

Brooks is referring to is WFLA Channel 8, the NBC affiliate in Tampa, and its reporter Melanie Mitchell, who on August 25 reported that funeral directors in Tampa are "working around the clock, seven days a week" to bury Floridians that are dying from Covid-19.

According to Brooks, Prindiville…

John Ricco, executive director of the Florida Cemetery, Cremation and Funeral Association, told CBS News Reporter that in recent weeks, funeral workers in Florida have been as busy as they were during the height of the COVID-19 pandemic in 2020.

This while DeSantis openly brags about how he got the Covid-19 Pandemic right while many other governors got it wrong.

In fact, DeSantis has and continues to get it so wrong that some funeral homes in Florida, according to CBS reporter Brooks are running out of space for bodies of people who have died from COVID-19.

Funeral homes have so many burials to arrange that they are forced to ask the dead families to please be patient. Bodies of the dead are stacking up at an alarming rate at the hospital, nursing home, and public morgues.

Prindiville told Brooks during her interview for CBS News…

"What makes it difficult for us nowadays is just explaining to family members that we cannot have — and we'll have to hold off having — a funeral. In an hour, I could have six death calls, and I'm back to figuring out how to piece stuff together."

None of this has even motivated a re-evaluation of Governor DeSantis to let up against his all-out war against social distancing, mask, and vaccine mandates. Intensive care units in the state are on the brink of triage who will be admitted for intensive care, which is essentially a choice between who may live and who will die from lack of medical care.

Florida Hospitals are contending not only with a shortage of personnel, including critical care staff. Those who are working are dealing with burnout. This means that physicians, nurses, respiratory therapists, and support staff are on the verge of a massive collapse in their ability to deal with the growing numbers of Covid-19 patients needing to be hospitalized.

Right now, we see a healthcare system in Florida that is stressed to the brink in terms of its capacity and pushed to the limit in terms of how it can remain afloat money-wise. The Miami Herald reports that the financial condition of the state's hospitals is in dire condition…

"That might seem counterintuitive. Wouldn't a flood of new patients be a boon for hospitals and healthcare providers? The reality is, the economics in hospitals are not as straightforward. Many non-profit institutions, such as the Jackson Health System, seek to care for a community's health instead of simply maximizing profit; some hospitals commonly provide services that end up costing them — subsidizing the difference with other, higher-margin activities.

"For instance, the loss an institution takes in operating an emergency room is more than made up by the tidy profit it can make on elective surgeries. Yet, through most COVID-19 pandemics, hospitals have been forced to cancel elective surgeries to deal with staffing shortages and protect patients from infection.

"Another example would be hospitals working with traveling and seasonal nurses to fill shortfalls in staffing. In normal times, it's a plug-and-play scenario. Still, the pandemic has forced healthcare systems to enter into bidding wars and fight off poaching by other systems by paying well beyond normal market rates for travel nurses, while at the same time paying overtime to exist staff and reassigning nurses to keep patient-care ratios in line with care models.

"It also threatens the condition of hospitals themselves when revenues decrease because the hospital is prioritizing its mission to provide healthcare over dollars and cents, which leads to decreases in credit rating, potential service cuts, and a hit to the economy.

"Studies have consistently shown the healthcare industry in Florida contributes more than $120 billion to the state economy and is responsible for more than 900,000 jobs. Anything that hurts that will cause the loss of jobs, from specialized surgeons to orderlies and janitors. After the giant hit we took in 2020, we cannot allow Florida's economy to retract even a fraction of a percentage point.

"As the former executive director of an organization that advocates for our state's free and charitable clinics, and a Democratic member of the Florida Legislature, you'd expect this is the part where I ask for additional government funding of these healthcare entities. State lawmakers, no doubt, will consider this when the Legislature convenes."

And, yet Florida's governor DeSantis continues to fight against every sensible step to mitigate the crises. He refused to mandate or even promote masking and voluntary vaccination to finally stem this COVID crisis. Given the recently announced FDA approval of the Pfizer vaccine, leaders should prioritize our healthcare system, the economy, and state welfare — not playing politics with masks and vaccines.

The question of whether DeSantis is a moron or murderer should be answered by his indictment for reckless indifferent mass homicide even before he runs for re-election as the State's governor in 2022, much less his anticipated run for the Republican nomination for president in 2024.