The most shocking revelation of the Trump Presidency came late last night with the release of a story by The New York Times that reveals Russia has been paying Taliban-linked militants bounties for killing U.S. and coalition soldiers in Afghanistan. Trump was offered options to respond but has taken no action. 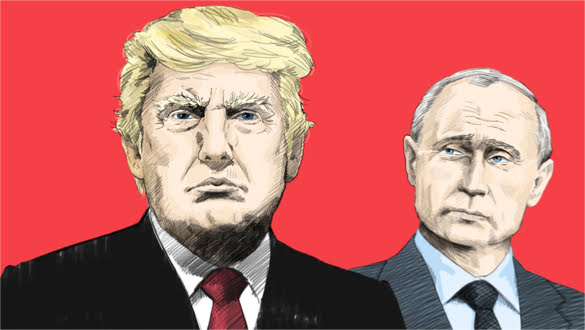 “The United States concluded months ago that the Russian unit, which has been linked to assassination attempts and other covert operations in Europe intended to destabilize the West or take revenge on turncoats, had covertly offered rewards for successful attacks last year.”

“Islamist militants, or armed criminal elements closely associated with them, are believed to have collected some bounty money, the officials said. Twenty Americans were killed in combat in Afghanistan in 2019, but it was not clear which killings were under suspicion.”

According to The New York Times, President Trump has refused to authorize any response against Russia after bounties were placed for the killing of U.S. troops in late March. That means Putin has ordered and paid for the murder of U.S. and collation forces.  It amounts to an act of war, and Trump has done absolutely nothing to rally the Afghanistan collation – to punish Russia.

Is he a Russian asset, working under the control of Putin as a  puppet? A genuine ‘Moscow Candidate’ bought off with hundreds of millions of dollars in loans?

Trump has been spewing out the accusations lately that former President Obama is guilty of treason. We know from his ghostwriter of the “Art of the Deal” Tony Schwartz that Trump is so insecure he projects and accuses others of the crimes he commits. It’s always someone else’s fault.

The report in The New York Times says…

“American intelligence officials have concluded that a Russian military intelligence unit secretly offered bounties to Taliban-linked militants for killing coalition forces in Afghanistan — including targeting American troops — amid the peace talks to end the long-running war there.”

The New York Times report describes its sources “officials briefed on the matter.”

On June 1st, when Trump invited Putin to Camp David during the G7 meeting more than 31 days after he learned Putin is paying Islamist militants to murder our brave soldiers, he claims so often to love.

If President Trump has kept this intelligence information from our coalition allies, he’s going to watch our allies cancel his G7 meeting and openly decry his being Putin’s puppet.

We lost twenty United States soldiers in 2019 to Islamist militants and their agents.

How much did Putin pay the scum?

The New York Times report is sickening to read. But every Trump supporter should know…

“The intelligence finding was briefed to President Trump, and the White House’s National Security Council discussed the problem at an interagency meeting in late March, the officials said. Officials developed a menu of potential options — starting with making a diplomatic complaint to Moscow and a demand that it stop, along with an escalating series of sanctions and other possible responses. Still, the White House has yet to authorize any step, the officials said.”

“Any involvement with the Taliban that resulted in the deaths of American troops would also be a huge escalation of Russia’s so-called hybrid war against the United States, a strategy of destabilizing adversaries through a combination of such tactics as cyberattacks, the spread of fake news and covert and deniable military operations.”

Dmitry Peskov, Russian President Vladimir Putin’s press secretary, said the United States had not raised the issue. Peskov is saying of the accusation….

“If someone makes them, we’ll respond.”

The families of the twenty murdered soldiers could care less about what lies the president’s puppet master has to say. The New York Times reports…

“They said the intelligence had been treated as a closely held secret, but the administration expanded briefings about it this week — including sharing information about it with the British government, whose forces are among those said to have been targeted.”

The president is a traitor, who instead of throwing every last sanction he can at them, including…

·        Recalling all of our U.S. ambassadors and diplomats from Russia and then throwing every Russian diplomat out of our country.

·        Doubling our forces in Germany, Poland, and the Baltic States.

·        Arming Ukraine to the teeth with air to ground shoulder weapons and other advanced offensive weaponry.

·        Banning with our allies the import of all Russian exports.

·        Doing what we can to crash the price of oil to $15 a barrel to cripple their economy. We can do that and still protect our oil workers and companies.

Instead, Trump is running for the position of the Confederate President of America and issuing an executive order protecting statues that honor traitors to their country. Trump wants to continue to celebrate slavers, rapists, torturers, who should be villainized.

This scandal could bring down the whole Trump Kakistocracy, starting with his resignation. Even the most delusional Trump supporter understand that Trump’s allowing Putin to put the price on American soldiers will end up with the funding and paying for terrorist attacks against the United States and the  Western democracies. If he loses another 7 points, he could steadily see polling in the ’20s. The attack commercials along could cost the Republicans 13 seats and still retain Senator Doug Jones Senate seat in Alabama.