Is President Trump A Russian Stooge Hellbent on Destroying the U.S. Government and Economy 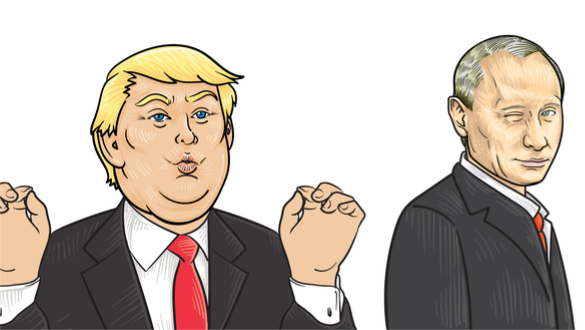 Is Donald Trump going to be the last U.S. President and the country’s first authoritarian dictator?  Was this Russian President’s underlying plan of revenge for America’s involvement in the collapse of the Soviet Union?

With the election of Donald Trump in 2016, there has been a growing contempt for our normal democratic process and norms. Now that President Trump is once again promising to the find a way to build the massive wall he has promised Mexico would pay for, again and again, is continuing to elevate his personal political problem, not being able to fulfill his promise of a wall, into a national crisis.

We have to consider the possibility that he and the Republican Party may attempt to permanently damage our democracy out of fear he might be completely wiped out in the upcoming 2020 election.

“The Republican Party has transformed itself into a political force that prioritizes its own power over the sanctity of electoral democracy. The authoritarian tendencies of Trump as President added to this rampant Republican electoral cheating threaten to create a national crisis. Trump has consistently disparaged the results of elections, even his victory in 2016. He appointed an experienced vote suppressor, Kris Kobach, to oversee a futile federal effort to prove electoral fraud. Trump uses presidential power to promote his personal interests. He employed our armed forces on our southern border as a political stunt. Although the shutdown that Trump gladly took credit for, until he started blaming the Democrats, is rejected by a majority of voters, Republican legislators have remained behind him. Now he is considering using the President’s emergency powers when our elected Congress thwarts his will.”

“The election of 2020 presents a critical dilemma for Trump. It may not be possible to indict a sitting president for the campaign finance violations for which Trump is currently an unindicted co-conspirator. If Trump wins in 2020, the statute of limitations of five years for such federal offenses will run out while he is in office. However, if he loses, he may face prison time. The many other investigations of his political and business activities that have already begun or will be initiated by the Democratic House will add to his judicial peril. 2020 qualifies as a personal emergency for Trump.

Would Trump’s core supporters accept a coup? Many evangelical leaders and voters believe Trump to be the modern incarnation of King Cyrus of Persia, a nonbeliever chosen by God to accomplish the goals of the faithful. Some of Trump’s most prominent evangelical supporters openly long for a “king” to rule America.

A criminal President, who will do anything to serve his ego and self-interest, even when threatened with jail. A political party willing to fix elections and ignore electoral results that don’t go their way. Fox News cheerleaders on the most popular media network who ignore news not aligned with their political point of view. A howling base of supporters that believes Trump’s opponents are traitors who belong in jail.

“if you aren’t scared about how a cornered Trump might lash out, you haven’t been paying attention.” It will be too late in November 2020 to prevent a national emergency. We must pay attention now.

Are we looking at the last U.S. President and the first authoritarian leader? It’s a serious question; citizens should begin to consider. What the Republicans haven’t been able to do with gerrymandering they may be willing to do with a coup. Further was this the goal, the plan Vladimir Putin had in mind as he assisted Donald Trump rise to the Presidency?