Is Limiting the Franchise Really Un-American? 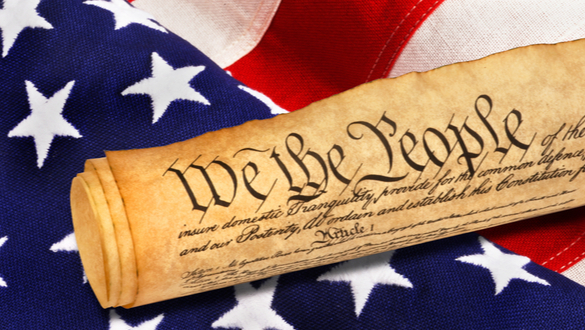 The word "democracy" is not mentioned in the text of the United States Constitution.

"When the Framers used the word themselves, it was often a pejorative term. On the convention's first day, delegate Edmund Randolph of Virginia warned that "none of the [state] constitutions have provided sufficient checks against democracy." A week later, Massachusetts delegate Elbridge Gerry said, "the evils we experience flow from the excess of democracy." Father of the Constitution James Madison referred to "the inconvenience of democracy," and Alexander Hamilton to the "imprudence" of it." — Eric Black, Imperfect Union: The Constitutional Roots of the Mess We're In

One of the triggers of indignation among the" Woke" Movement and the left-wing of the Democratic Party has been efforts by Republican legislatures to tighten protections against voter fraud.

So far as I know, there have been no overt efforts to ban minorities from the polls. Only the argument that tighter checks on fraud inevitably discourage poorer voters (who more frequently support Democrats) from casting ballots.

This brouhaha has occasioned surprisingly little re-consideration of the Founding Fathers' views on the vote. Yet as the comments quoted above testify, the Founders were all but uniformly opposed to "democracy."

Take a closer look, and you will see, as did James Madison, "father of the U.S. Constitution," that regulation of the right of suffrage is "a task of peculiar delicacy." The Founders were not viewing partisan advantage when they considered limiting the franchise. They thought it was crucial to protecting property rights and thus the stability and success of the American experiment.

Early America in the Rearview Mirror

Very few today realize that the limited government of early America involved a limited franchise that effectively equated to "rule by the top 1%." The U.S. experiment was conceived as a "limited government" during the agricultural era, formulated at the eve of the Industrial Revolution. The Declaration of independence and the Wealth of Nations were both published in the same year, 1776.

The scope politicians had to redistribute income was limited by restrictions on the franchise in the republic's early days. There was no chance of a Bernie Sander's style re-distribution because only landholders could vote. The electorate was limited to the top one percent. If you want to take a racialist slant on it, you could say that only white landowners could vote. You could say that, but it was not entirely true, as some black men, especially larger landholders, did vote.

A simple ballot box was among many souvenirs of a simpler time that formerly held a place of honor at Cedar Hill, a colonial plantation house, and my ancestral home in Calvert County, Maryland.

The ballot box performed its function two centuries ago as a repository for simple paper ballots. The ballots were secret but not mysterious in those long, lost days before" white privilege" became a matter of outrage for the "woke" movement. Election results tended not to be interesting because little of "interest" was submitted to a show of hands.

The One Percent Electorate

In America's early days, democracy worked with "limited government" because the electorate more or less saw eye-to-eye. There was no danger of AOC and her energetic comrades gaining office to redistribute wealth in the republic's early days; only landholders could vote. That worked against socialist policies.

The 1% electorate found its candidate in James Monroe, who won every state in his quest for a second term; Monroe was a multimillionaire, worth $30.9 million in today's terms — according to a 2019 calculation by USA Today.

Much has changed in the meantime. As you know, Bernie Sanders leads a large faction of the Democratic Party who rage against today's 1%. They seem to favor confiscatory taxation, along with numerous other costly, "progressive quirks" ranging from "Medicare for all," reparations for slavery to returning the U.S. to adherence to the $10 trillion Paris Climate Accords.

The Technology of the Vote

The simplicity of the paper ballot's old technology assured that determining the winner of an election in 1820 was a matter of simple arithmetic. That is not necessarily true now. Given today's voting technology, the inputs and outputs in many cases are not necessarily as clear as they once were. Dr. Shiva Ayyadurai, an MIT Ph.D. mathematician, says election outcomes may be unverifiable. More pertinently, he suggests that U.S. election outcomes can be manipulated notwithstanding assurances to the contrary.

In a recent Youtube presentation, Dr. Shiva illustrates that votes are stored "double" as floating decimals that can be manipulated. He concludes that President Trump's vote total in Michigan's four biggest counties was reduced by 69,000, and Biden's increased equivalently.

He has since posted a second video with further analysis:

Dr. Shiva Ayyadurai argues that signals of election fraud abound in the Trump/Biden race in Michigan. He claims that most voting systems "contain weighted race" features designed to distort elections' outcomes by redistributing votes from one candidate to an opposing one. Presumably, the vote shifting is informed by the preferences of the Deep State.

Analyze it yourself and determine what you think. Dr. Shiva's lucidly argued suggestion is that someone, the 'Deep State, has pre-programmed voting machines to permit the rigging of results.

Dr. Shiva makes a sophisticated argument. Make what you will of it. It is evident that the mechanization of voting and tabulation has introduced opportunities for election fraud that was impossible in the long-lost

days of the antique ballot box.

That is why tighter regulation of franchises is justified. If that deters more needy voters from casting ballots, so much the better. That will help fulfill James Madison's objective of protecting the rights of property owners from being overruled by a majority without property.

Times change. The emergence of "one man, one vote" as a principle of American politics would have been a "step too far" for James Madison and the authors of the Constitution. They created the House of Representatives, the Senate, the presidency and the Supreme Court. Of these four institutions of government, only one, the House of Representatives, was to be selected by popular vote. That tells you that the founders did not consider limitations on the franchise to be adverse to the American experiment. On the contrary, they thought them essential to good governance.

Over the last three decades, I have diligently kept my Strategic Investment readers aware of the buy and sell signals related to the political, social, international, and other instability that affects our lives daily.