Is Kim Jong Un Been Playing President Trump for a Fool? 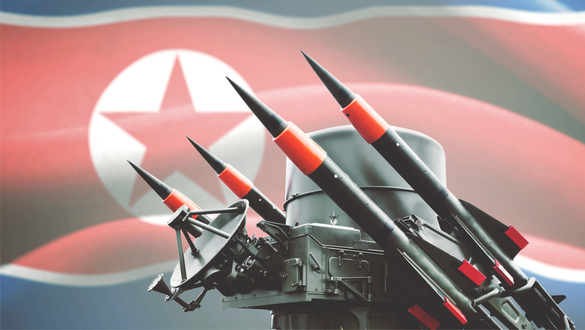 While President Trump expresses his love for Kim Jong Un, the dictator and has suspended defensive exercises with South Korea, the North Korean dictator may have built as many as 12 new nuclear weapons.

President Trump, on his return from his first meeting with Kim Jung Un, tweeted that there was no longer a nuclear threat from North Korea. We now know he was duped, by the dictator that he has expressed love. 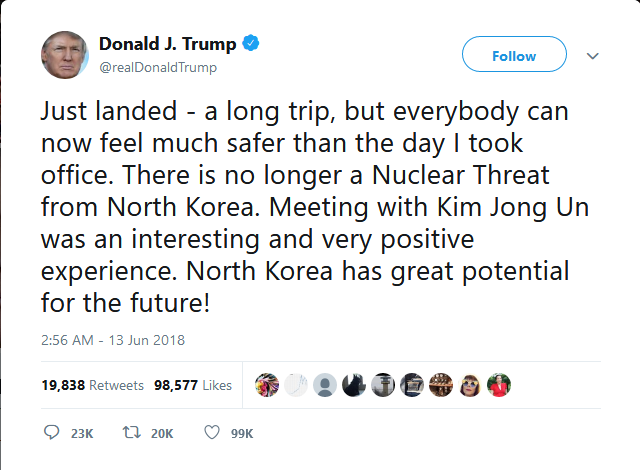 This past Thursday, The Wall Street Journal reported that analysts with the Defense Intelligence Agency (DIA) believe that North Korea may have developed as many as 12 nuclear weapons since the President Trump so-called historic Trump-Kim summit in Singapore June 12, 2018.

The Singapore meeting may have been historic fake and intentionally peace negotiation on the scale of English Prime Minister Neville Chamberlain’s signing of the Munich Agreement in 1938 with Adolf Hitler that conceded the German-speaking Sudetenland region of Czechoslovakia to Germany. After which, Chamberlain made the “Peace in our time” announcement believing Adolf Hitler negotiated in good faith.

“Analysts at the U.S. Defense Intelligence Agency say North Korea’s scientists may have produced 12 nuclear weapons since the first Trump-Kim meeting in Singapore last year. In total, Pyongyang could currently possess between 20 and 60 nuclear bombs, according to estimates by various security analysts,”

Military, history and diplomacy experts believe if the assessment is true and North Korea has built as many as 12 new nuclear weapons, President Trump’s faith in negotiations with Kim Jung Un is not negotiating in good faith and Trump’s claims of progress in negotiations are completely incorrect.

President Trump following his meeting with Kim Jong Un in Singapore said he believes Kim has adhered to an agreement to curtail the development of nuclear weapons, but Trump’s critics have accused him of being naive in trusting the North Korean dictator. Many have referenced the Munich 1938 agreement between Great Britain and Germany

The Wall Journal story would seemingly support the latter interpretation that Trump has misplaced confidence in Kim. Numerous news outlets picked up The Journal’s report.

But the reporting by the Wall Street Journal about DIA’s assessment is inaccurate according to the Newspaper. The article has been edited to remove the DIA reference, and a correction has been attached at the bottom of the piece…

“A previous version of this article incorrectly stated that analysts at the U.S. Defense Intelligence Agency said North Korea could have produced 12 nuclear weapons since the Trump-Kim handshake in Singapore on June 2018. (July 27, 2019)”

The Wall Street Journal has corrected the story and says the assertion that it now relies on the story being factual on analysis by non-governmental analysts who track the development of weapons of mass destruction. The analysts told The Wall Street Journal that North Korea has continued developing long-range missile capabilities and fissile materials that could be used for nuclear weapons. 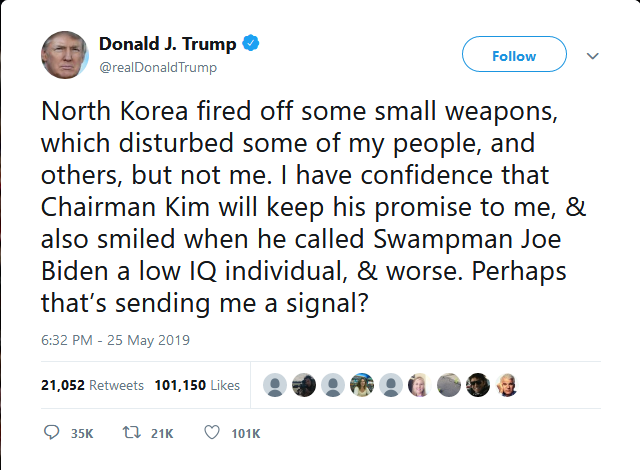 So the question is, has North Korea’s dictator been playing President Trump as a fool?