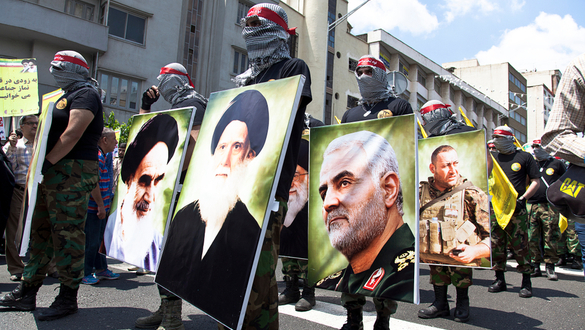 Hossein Dehghan, a commander of Islamic Revolutionary Guard Corps (IRGC) and military adviser to Iran’s supreme leader Ayatollah Ali Khamenei said on Wednesday. Tehran would not negotiate with the U.S. under any circumstances, and if Washington decided to go to war, then all American bases in the region would be targeted.

President Trump and his Iranian hawks in his administration are close to ramping up U.S. defense spending up sharply from the $750 billion budgeted to well over a $1 Trillion a year for the next several years by provoking and waging war against Iran.

Iran’s President Hassan Rouhani hint Wednesday that the British tanker diverted by Iran’s revolutionary guard to an Iranian port, in retaliation for the British seizure in the Mediterranean of an Iranian tanker carrying oil to Syria in breach of EU sanctions could be swapped as a way of de-escalating the maritime crisis in the Gulf…

“We don’t want tensions with some European countries.”

During his speech, President Rouhani accused Abu Dhabi, the capital of the UAE, of becoming a U.S. base of operations to strike out at Iran’s national security.

Japanese Prime Minister Shinzo Abe and top French diplomatic adviser Emmanuel Bonne have both made recent visits to Tehran this past month in hopes of preventing another gulf war, which could expand quickly into an intense and bloody regional war.

President Trump’s declaring this week he could win the war in Afghanistan in 10 days, but that would mean killing ten million was an overt threat and intended to convey Trump if forced would use nuclear weapons to wage war.

The threat may have had an effect in that President Rouhani also said Iran Wednesday his country would be open to talks should there be a “cease-fire” in U.S. economic sanctions that are crippling the Iranian economy.

Trump and his war hawks, however, are not going to suspend economic sanctions and are instead hoping that Iran will give them an excuse to fill the coffers of an array of defense contractors, who will, in turn, donate tens of millions of dollars to President Trump and GOP members of Congress.