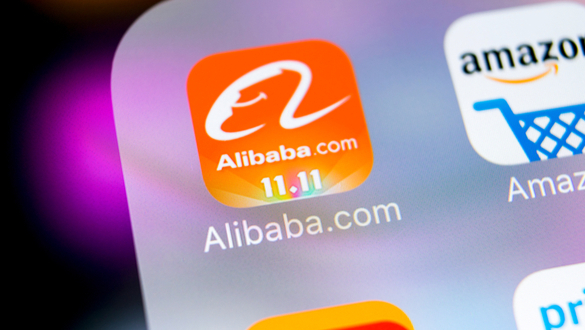 If you’re holding shares in BABA the last few months, you have to be pretty happy and optimistic. IBD warnings on China’s version of Amazon should be considered seriously. Trump’s unrealistic demands to end the trade war could lead to a sudden collapse of negotiations between the two largest economies in the world.

If the United States and China can make a deal Alibaba (BABA) China’s version of Amazon, and for that matter a few other top quality Chinese stocks I recommend in World Opportunity Investor are positioned to enjoy a genuine euphoria rally of 10%, 12% even 15%.

I’ve been very hopeful of seeing a deal gets done with China on trade, but President Trump insistence on leaving both sanctions and tariffs in place while he gets everything he wants is not going to happen. If President Trump insists on maintaining tariffs and sanctions while China agrees to a deal, President Xi like Dictator Kim Jong Un will walk out of any face to face Summit with Trump.

IBD’s current analysis as of Monday…

“Alibaba stock broke out of a cup-with-handle base on Friday and is 0.4% above the 188.18 buy point. Volume was average. It's key to see strong volume on a breakout, at least 40% to 50% higher than average.

“Alibaba's base has a key similarity to the cup-with-handle base that Apple stock recently cleared. Like Apple, the depth of Alibaba's base is 39%. Our research shows that bases with a depth of 40% or more have a higher chance of failing.”

The ErlangerChartRoom.com sentiment indicators we use here on the other hand at Wall Street Rebel are currently very bullish on BABA and other Chinese equities I have recommended. Which I think is reading investor and professional sentiment on BABA as if the U.S. and China will put a deal together in the next 60 days.

Despite the encouraging charts and diplomatic assurances from Secretary Mnuchin, there’s no way the Chinese are going to bend over and agree to a deal that requires China to jump through all sorts of hoops while the United States keeps all of its imposed sanctions in place, including its tariffs on $250 Billion of Chinese imports.

President Trump’s insistence on a one-way settlement will blow up any deal and ironically, make the Chinese in this next presidential election cycle a much more powerful influence that the Russian’s were on the 2016 election.

Unlike the Russians, the Chinese could turn a few deep red farming states blue in 2020, by merely stopping all agricultural purchases and switching entirely to U.S. competitors.

The signs of a possible breakdown in Chinese, U.S. negotiations are in trouble are starting to add up. In early March the WH was talking about a summit with President Xi in late March, early April. As March rolled into April, Xi didn’t want to go to Mar-a-Lago but instead to Washington, with it being an official state visit.

Now Mnuchin with all his Trump troubles is telling America “we’re close.” The assurance rings as true as Henry Kissinger’s biggest public lie… “We believe peace is at hand” which wasn’t true but helped President Nixon rack up a genuine re-election landslide in November of 1972.

I recommend selling BABA and stepping on the sidelines.

If the Chinese and U.S. trade war talks break down, U.S. stocks will get clobbered on more evidence that this supposedly great negotiate, President Trump is incompetent. 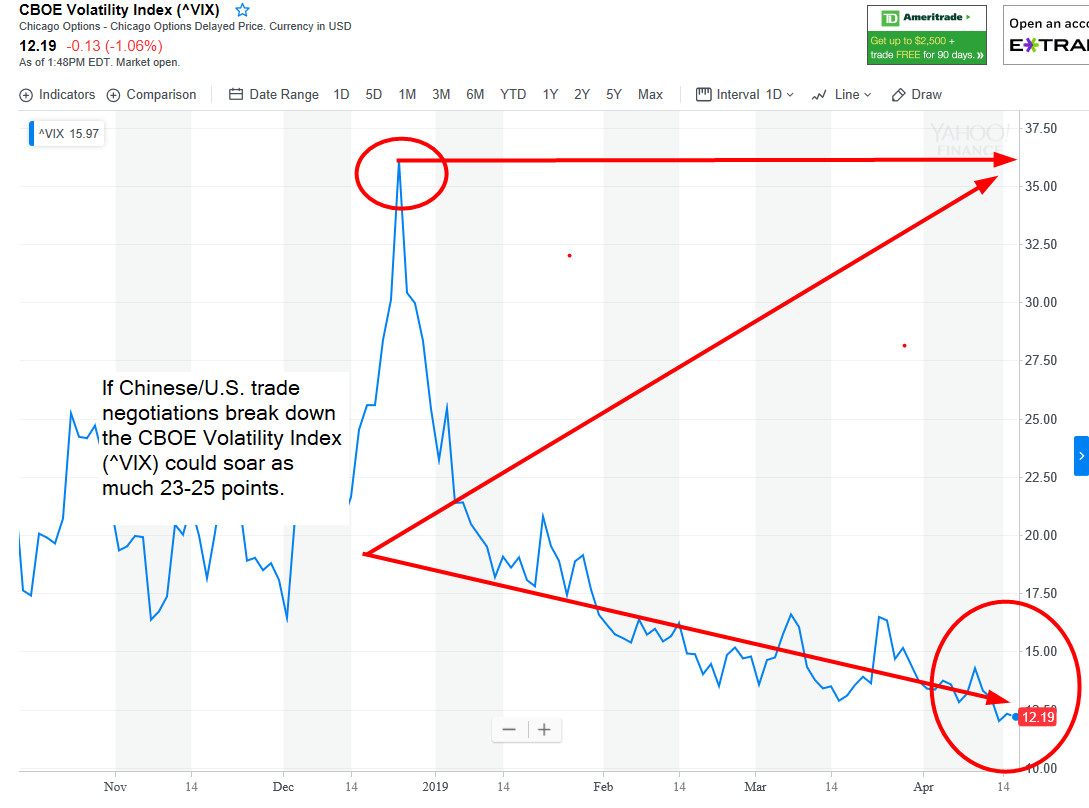 Keep in mind if the Chinese withdraw from negotiations, Trump would almost certainly double down and increase the tariffs on another $200 Billion of Chinese imports. In that scenario, the VIX should be based on history, run much higher than 35.

In 2016 the Russian’s played our country via social media. By 2020 between the torrent weather and the Chinese shift agriculture purchases and supply chains, they may turn more than one deep red state blue. While options can be very risky and you could lose every dime if the U.S. stock market isn’t disrupted by a break in negotiations with the Chinese, the upside, if you’re holding these 4 VIX options, could be $1,600 each or $6400 on a $720. That’s not a bad risk, reward opportunity.