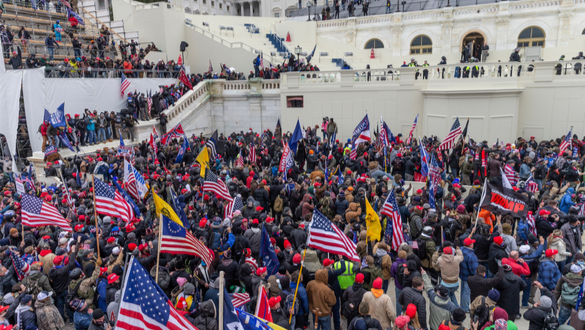 The federal prosecutor, Michael Sherwin heading the inquiry into the January 6 assault on the U.S. Capitol, said in a recent interview that the investigation would most definitely end in sedition proceedings against some of the perpetrators.

“The evidence, in my opinion, justifies those claims. And I believe that as time goes by, more evidence would justify that,” Michael Sherwin said in an interview during an interview with “60 Minutes” that aired Sunday.

Sedition is a crime under U.S. law, and it is described as conspiring to overthrow the U.S. government or using force to “prevent, impede, or delay the enforcement of any law of the United States.” Sedition offenses have traditionally been unusual.

Sherwin also claimed in the interview that authorities were also looking at whether President Donald Trump was legally liable for the riot.

“There’s no doubt that Trump was the anchor that drew people to D.C. on the sixth,” Sherwin said. “The issue now is whether he is legally responsible for anything that occurred after the siege, after the breach?”

So far, the probe has culminated in over 400 court prosecutions, all of which include serious federal fraud charges. About 100 individuals have been charged with targeting federal and municipal security officers.

Sherwin reported that around 10% of the prosecutions were “more complicated plot cases” in which investigators had proof that right-wing armed gangs intended to strike the Capitol. Investigators are focusing on determining more about the aspects of such proposals.

Following the assault on the Capitol building by a pro-Trump crowd, U.S. government officials, international leaders, and pundits have criticized the President and those who participated in those actions.

Sherwin, who worked as the acting U.S. Attorney in Washington through the Biden transition until resigning in early March, added that more than 400 individuals have been indicted with their involvement in the Capitol assault, with dozens facing substantial federal criminal offenses carrying 5-, 10-, or 20-year terms. It has been reported over one-hundred individuals have been charged with attacking federal and local officials, including Capitol Police Officer Brian Sicknick, who died due to the incident.

A medical examiner has not yet confirmed how Sicknick died, but Sherwin said that if the proof points to rioters using a drug, “ that’s a murder event.”

Many of their speeches use different terms to explain what occurred, including “insurgency” and “sedition.”

The terms “insurgency” and “insurrectionists” are commonly used by press sources and others to describe the Capitol building storming and the rioters involved.

Merriam-Webster describes insurrection as an act or instance of revolting against civil authority or an established government.” Other meanings, such as the Cambridge Dictionary’s, claim that the behavior is generally aggressive. According to Merriam-Webster, synonyms like “revolt” and “uprising.”

Wikipedia… An insurgency is a violent, armed rebellion against authority when those taking part in the rebellion are not recognized as belligerents (lawful combatants).

Insurrection, or uprising, is a misdemeanor under Title 18 of the United States Code, punished by a fine, up to ten years in jail, or both. Being accused of rebellion even disqualifies anyone from seeking elected service in the United States.

According to Merriam-Webster, “sedition” conduct or speech inciting people to rebel against the authority of a state or monarch.”

Wikipedia... Sedition is overt conduct, such as speech and organization, that tends toward rebellion against the established order. Sedition often includes subversion of a constitution and incitement of discontent toward, or insurrection against, established authority.

Acting U.S. Attorney Michael Sherwin announced that he has issued his attorneys “marching instructions” to prosecute major sedition and fraud charges linked to the assault.

The act of sedition, like rebellion, is a felony under the United States Code, which defines it as two or more persons conspiring to undermine the United States government or “prevent, impede, or delay the enforcement” of United States legislation by force. It carries a fine of up to $20,000 for up to 20 years in jail.

President Trump has been accused of sedition by Bill de Blasio Mayor of New York City. A former federal prosecutor Sam Liccardo and mayor of San Jose, CA said the President “should be prosecuted for sedition.”

Evidence Is Trending Toward Sedition Charges