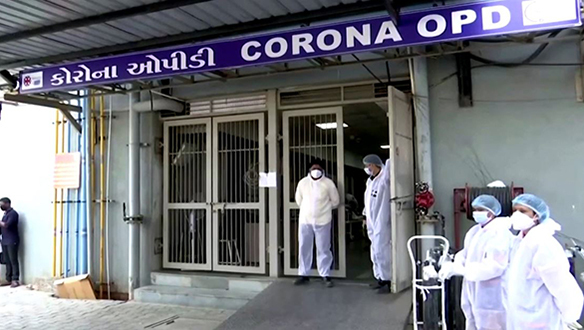 Two of India’s largest cities were forced this week to impose stringent restrictions on the movement of its citizens as the country saw a surge of Covid-19 cases jump over 200,000. The country’s fragile healthcare system is on the verge of collapse.

On a comparative basis to the United States with a population of 330 million that has suffered 578,000 deaths and Brazil with 231 million people who have seen almost 400,000 deaths, India, by the numbers, looks as if it has escaped the worst the pandemic can dish out. Yet, now it appears that India’s collision with the Covid-19 pandemic is just beginning, which is big trouble for India and the rest of the world.

India is a major manufacturer of the Covid-19 vaccinations. The rising numbers of those infected in the country are pivoting its focus from exporting the Covid-19 vaccines to focusing all its production on domestic demand weighted until recent days to the global effort to end the pandemic.

The situation in New Delhi has become increasingly dire and stay at home orders for this coming weekend have been announced and only essential workers will be able to move around the city and only if they have a pass from local authorities. Suffice it to say movie theaters, restaurants, malls, gyms and spas have been ordered to close. Although movie theaters will be allowed to open during weekdays to accommodate one-third of their capacity, it still amounts to insanity, given the rapid spread of the virus.

The AP news service quoting Arvind Kejriwal, New Delhi’s top elected official, says that despite the rapid rise in coronavirus infections, there are still 5,000 beds available in the capital city and more capacity being added. More than a dozen hotels and wedding banquet halls have been ordered by local officials to be converted into Covid-19 centers where doctors from nearby hospitals will treat “moderately ill patients.

“The surge is alarming.”

The steps being taken in India’s capital come after similar measures were imposed in the worst-hit state of Maharashtra, home to the financial capital of India, Mumbai. So far, however, restrictions have not included train and plane travel.  This will only worsen the surge taking place in India; in recent days, tens of thousands of panic-stricken laborers have flocked to overcrowded trains to leave Mumbai.

The mass exodus is likely to spread Covid-19 like a wildfire across the entire country. The country’s increasingly fragile medical system is being aggravated by shortages of oxygen and oxygen tanks. In some cases, it forces hospitals to put two patients in the same ICU beds.

Even with the relatively low number of Covid-19 cases compared to the numbers reached here in the United States at their peak, cremation and burial grounds in the worst-hit areas are already finding it challenging to cope rapidly increasing number of corpses arriving for last rights. This is causing the panic to reach a fever pitch thanks to the intense coverage it’s receiving in the Indian news media.

The number of deaths being reported by India’s government is thought to be dramatic undercount by many observers. The current outbreak could threaten hundreds of millions of India’s citizens and lead to millions of deaths. The current vaccination program in India is at 3 million a day. For a country with a population of 1.39 billion, the current vaccination rate will take over a year, assuming it takes place without a single day off.