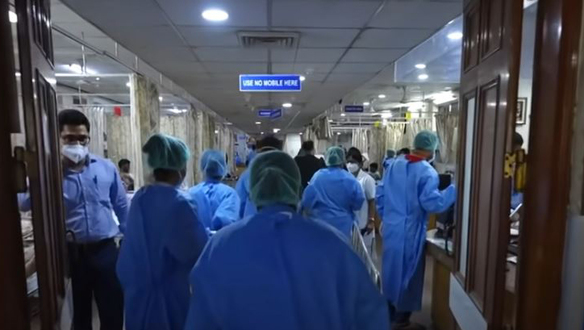 India’s archaic dismal health system is collapsing as the country is overwhelmed by the world’s worst COVID-19 surge. The risk of newer strains of the virus becoming even deadlier is growing in a country with 1.4 billion people.

If the spread of Covid-19 continues to grow in India, the danger to the rest of the world will increase geometrically. India and much of the third world will have to be isolated, and the number of those who die or become long-term victims of the virus will surge to unimaginable numbers.

India already was using oxygen tanks on special express trains as major hospitals in New Delhi on Friday. It begged on social media for more supplies to save COVID-19 patients who are struggling to breathe.

India’s underfunded health system faces another global record in daily infections for a second straight day with 332,730. According to press reports…

Given the flawed health system and the terror being faced from the COVID-19 pandemic, we may see these numbers jump to 160 million infected and a daily death count of over 20,000 daily. No one is warning of the danger of these numbers reaching these levels. They’re too busy focusing on the worsening situation by the day, with hospitals pleading with the government to replenish their oxygen supplies and threatening to stop new admissions of patients.

According to the new media in India…

“A major private hospital chain in the capital, Max Hospital, one of its facilities had one hour’s oxygen supply in its system and was waiting for replenishment since early morning. Two days earlier, they had filed a petition in the Delhi High Court that they were running out of oxygen, endangering the lives of 400 patients, of which 262 were being treated with COVID-19.”

India’s railroad Minister Piyush Goyal at the request of the Indian government, has started running Oxygen Express trains with tankers to meet the scramble at hospitals. According to Saket Tiku, president of the All India Industrial Gases Manufacturers Association…

“We have surplus oxygen at plants which are far off from places where it is needed right now. Trucking oxygen is a challenge from these plants. We have ramped up the production as oxygen consumption is rising through the roof. But we have limitations and the biggest challenge right now is transporting it to where it’s urgently needed.”

India’s Supreme Court told Prime Minister Narendra Modi’s government that it wanted a “national plan” on the supply of oxygen and essential drugs for the treatment of coronavirus patients. In response, the New Delhi government issued a list of a dozen government and private hospitals facing an acute shortage of oxygen supplies.

The Press Trust of India reported…

“25 COVID-19 patients died at Sir Ganga Ram Hospital in the past 24 hours and the lives of another 60 were at risk amid a serious oxygen supply crisis. The news agency quoted unnamed officials as saying “low-pressure oxygen” could be the likely cause for their deaths.”

Ajoy Sehgal, a hospital spokesperson in New Delhi, refused to comment on whether the 25 patients died from a lack of oxygen. He said an oxygen tanker had just entered the hospital complex and hoped it would temporarily relieve the fast depleting supply.

Meanwhile, the vaccination effort is almost nonexistent in India. India is focused on acquiring oxygen, the health crisis on the ground, and how to treat the avalanche of patients. The lack of a genuine vaccination effort to inoculate its 1.4 billion population could kill more people worldwide than perished in both the 1st and 2nd World Wars.

Covid Has India on Brink of Humanitarian Crisis