India Kicks Trump Back with Tariffs 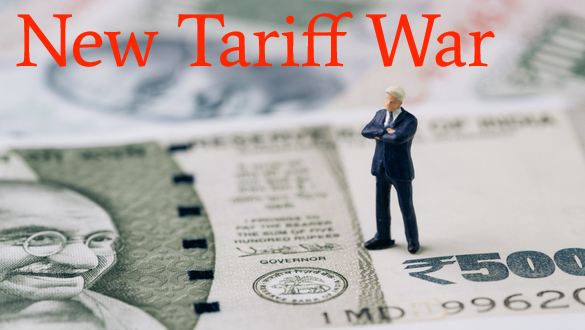 Trump’s trade war is becoming a global dispute; last time this occurred the United States, and the world economy was driven into a depression. Many economists and historians say it was a catalyst for World War II.

The trade war with India is ratcheting up as the trade wars with the European Unio, and China appear to show little hope of ending. India’s government decided to impose retaliatory tariffs on over 28 products imported from the U.S., including almonds, fresh apples, and phosphoric acid.

Last week, Minister Piyush Goyal notified its decision that India would likely not pursue an appeal of the United States decision to withdraw from the Generalized System of Preferences (GSP) program. This opened the door to for these newly imposed retaliatory tariffs by India.

The decision was not announced by the Indian government however, it was instead made public through the widely read Indian Express on Saturday, which reported the Indian government would notify the US about these retaliatory tariffs before the next day, by the Sunday deadline that the increase in India’s tariffs would go in effect into effect on Sunday.

In a separate and additional notification, India also raised the standard customs duty (applicable for all countries) for lentils, boric acid, and some diagnostic reagents. India’s duty for lentils was raised t from 40% to 50%, for boric acid to 27.5% from 17.5% and for diagnostic reagents other than those for pregnancy confirmation and diagnosing AIDS from 20% to 30%.

California’s almond growers and apple growers in Washington, Connecticut, and New York are going to be seriously impacted by India’s newly increased tariffs.

The Indian government decision shows that nations around the globe are following President Trump and are increasing the danger of his world-wide trade war slowing the world economy down. This trade dispute has festered since after the U.S. imposed tariffs on India’s steel and aluminum product exports, citing a (bogus) national security crisis…

President Trump’s decision to escalate the trade war comes weeks after Prime Minister Narendra Modi was elected for a second term. President Trump terminating India’s benefits under the GSP was described by the Indian commerce ministry called “unfortunate.” India was the largest beneficiary under the GSP trade program.

“India, like the US and other nations, shall always uphold its national interest in these matters. We have significant development imperatives and concerns, and our people also aspire for better standards of living,”

The U.S. is one of India’s largest trading partners, exporting $33.1 billion worth of goods to India in 2018. However, India still had a goods trade surplus of $21.3 billion with the United States. Yet Trump has repeatedly referred to India as a “tariff king.”

Officials from the Trump administration said last week said the US is open to dialogue to resolve these differences in trade and then issued a demand for India drop its trade barriers.

This trade war will seep into the United States ability to restrict Iranian sales of crude oil to India. The Chinese have already let it be known that it will try to increase its business with Iran, rather than seek to limit it.

Political and trade experts suggest President Xi and Prime Minister Narendra Modi may give the cold shoulder to President Trump during the upcoming G-20 summit.