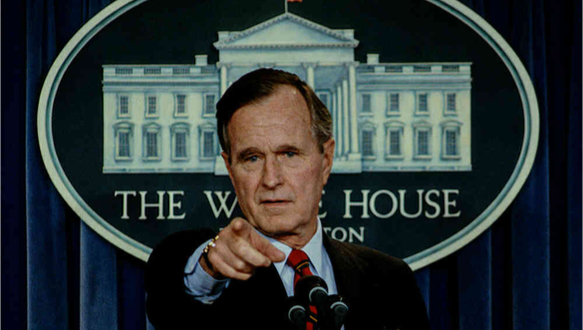 Millions of points of light will burn across America in tribute to this remarkable man. The U.S. Stock Market will be closed this Wednesday in deference as America mourns one of its favorite sons.

It doesn’t matter if you’re a Republican, Democrat or Independent President George H. Bush can only be seen as an American hero.

We at WallStreetRebel.com mourn his passing and are celebrating his magnificent life that was devoted to his family, country, and God.

When the Soviet Union collapsed President Bush announced that “America has won the cold war.”  He took no personal credit, never mentioned the politics because he was an American patriot first, last and always.

When he was defeated in 1992, he accepted the loss with graciousness and class by making it clear in his traditional letter to his successor President Clinton… “I am rooting hard for you”… which was just one example of his being a great American statesman.

President Bush organized a worldwide effort to restore liberty and justice to the people of Kuwait at the same time defining his future of his country.

“I want a kinder and gentler nation.”

— Bush, again in his GOP nomination acceptance speech. The phrase earned him both plaudits and jeers, much like his “points of light.”

“Five months ago, Saddam Hussein started this cruel war against Kuwait. Tonight, the battle has been joined... Our goal is not the conquest of Iraq. It is the liberation of Kuwait.”

— Bush in January 1991, announcing the start of the first Gulf War.