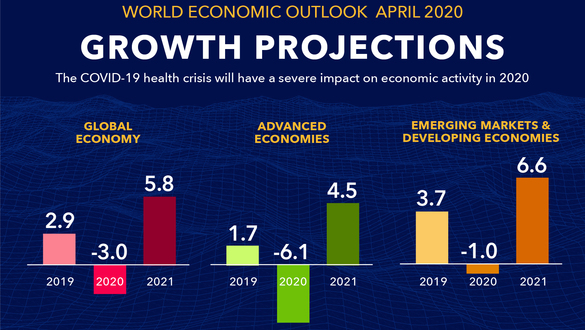 The International Monetary Fund (IMF) estimated earlier this week that the global economy would contract by 4.9% this year, before growing at a pace of 5.4% in 2021. Both estimates were downgraded from April’s forecast.

The International Monetary Fund is warning in its new report “World Economic Outlook” released yesterday there is an ongoing disconnect between financial markets and the real economy. Under pining the equity markets could lead to a correction in asset prices, like equities and commodities.

The recent data indicates used by the IMF indicates a deeper-than-expected economic downturn, yet the equity, bond, and oil markets.  The oil markets appear unfazed: the S&P 500 enjoyed its largest 50-day rally in history in early June.

“This disconnect between markets and the real economy raises the risk of another correction in risk asset prices should investor risk appetite fade, posing a threat to the recovery.”

“According to IMF staff models, the difference between market prices and fundamental valuations is near historic highs across most major advanced economy equity and bond markets, though the reverse is true for stocks in some emerging market economies.”

While the equity markets have rallied from the March 23, 2020 nose-dive despite continuing risks of deepening geo-economic troubles, the world is grappling with the coronavirus health emergency that has taken the lives of 486,000 + people, according to worldometer.com data. The recent surge taking place in the United States, which broke its single-day number record of confirmed cases of coronavirus, threatens to cause an unprecedented amount of social unrest and an economic crisis.

Also, there is social unrest in many advanced economies as citizens demand an equal society, which could hit investor confidence.

The risk of a continued surge in coronavirus infections that has already shattered the record for new cases in the United States and the resurgence of trade tensions in China are ominous and could endanger the global economy.

The IMF Warns: Asset and fund managers in danger

The IMF is pointing in its new report that there is a risk that “nonbank” financial companies — such as asset and fund managers are at risk of economic shocks in the event of a large wave of insolvencies. The IMF warned that these businesses could even amplify the financial stresses that are already starting to show themselves…

“For example, a substantial shock to asset prices could lead to further outflows from investment funds, which could, in turn, trigger fire sales from those fund managers that would exacerbate market pressures.”

The IMF estimated earlier this week that the global economy would contract by 4.9% this year, before growing at a pace of 5.4% in 2021. Both estimates are downgrades from the IMF’s April forecast. It should be noted that other very credible forecasts are warning that the global growth could also be negative in 2021 if the pandemic and trade disputes continue.

“There is tremendous uncertainty…substantial support will need to be continued…but its form will depend on how the recovery goes.”

The IMF is also warning in its new report, “World Economic Outlook “that corporate debt had risen over the past several years and has exploded to help deal with the economic fallout from the coronavirus pandemic.  As a result, corporate debt currently stands at a “historically high level relative to GDP (gross domestic product).” This, coupled with sharply rising household debt, is creating tremendous vulnerability in the financial sector and could have a devastating impact on the ongoing economic crisis. The IMF said…

“High levels of debt may become unmanageable for some borrowers, and the losses resulting from insolvencies could test bank resilience in some countries.”

After reading the new IMF report and their warning that all of the issues they raise in it could lead to a correction of 10% or more decline in the price of financial assets, I’m left wondering along with many others if the warnings of the IMF are muted. We at WallStreetRebel.com believe the IMF predictions are too optimistic, and the broader U.S. stock indexes could fall as much as 40% between now and the end of the year.