How To Track The Market As It Gets Toppy 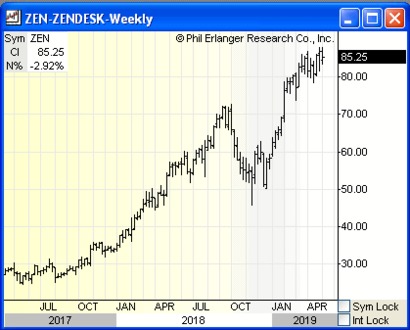 The current up move that began on the close of Christmas Eve is now 134 days old which makes it one of the longer up moves since we began to track them in the fourth quarter of 2012.  In August of 2017 into January of 2018, the S&P moved higher for 161 days.

So the theme of this week is to enjoy the current run but we would be selective on new additions  that would be vulnerable to profit taking. We need to watch such a name closely. A name we would not add to here would be Zendesk (ZNDSK).

One of my favorite rules is that when corrective action begins, the crowd always takes profits on their biggest winners. As such, we need to anticipate such action and be sure to exit the highfliers like Zensdesk when the overall equity market decides to have a correction.