Housing Dip Ahead: How the Other Realm of Investment Affects Stock Prices 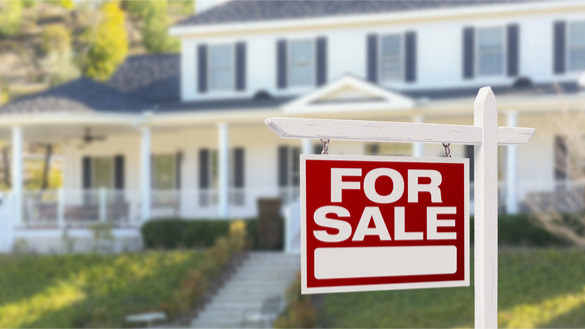 Even while there will be a slowdown in the frenzied pace of sales in the home market, there is no guarantee that this will have a negative effect on stock prices.

"Existing home sales are reported when the transaction closes. Sales in June were mostly for contracts signed in April and May. Recent data shows a significant slowdown in activity starting in May and decelerating further in June.

Contracts for sales fell significantly in June, and this will be reflected in closed sales in July and August, suggesting that existing home sales will fall further in the coming months."—  Bill McBride, Calculated Risk

This publication is focused mainly, though not exclusively, on financial markets. The wisdom quoted above from Calculated Risk is a useful reminder that in the American experience, the purchase of housing is the most popular form of investment.

While the profitability of housing as an asset is much harder to track than the returns for holding a basket of stocks, available evidence suggests that stock investing is considerably more profitable than home ownership.

Over the long haul, home values have seldom kept pace with inflation. An annual return of 3% to 4% in housing would be something to brag about. But unless you were able to flip a particularly prime property in a concise holding period, you could not expect to approach the stellar returns we have been booking in my Strategic Investment newsletter.

A review of our last 11 closed-out positions found one loser and ten winners, eight of which were booked for total cumulative returns of 48.88% or better.

If you want to make money, you are looking in the right place, a portfolio investment.

Nonetheless, my parents arrived late and made a million or two from the housing. However, I also learned from family experience that housing/property investment returns have been relatively modest over the centuries.

My first ancestors in what is now the United States arrived in  Maryland in 1650. They were not precisely enthusiasts for the trip. Robert Brooke, who sailed on his own ship with 27 servants, his wife and children, and his hunting hounds and horses, was informed by Oliver Cromwell that if he did not leave England in the early months of 1650, he would be beheaded. Brooke offended Cromwell by allowing King Charles to use his Hampshire as a headquarters in the Civil War. (Shades of ISIS).

As Brooke was an ancestor, I am only too delighted that he took the hint and sailed to America. Under the circumstances, I think he made the right choice.

As it happens, one of the the17th century homes erected by my colonial ancestors still stands, known today as "Cedar Hill." Its builder, a merchant planter named John Bigger, was a consequential man. A Maryland House of Delegates member, he was a Colonel in the colonial militia that overthrew Lord Baltimore, putting an end to Baltimore's proprietary colony. More prominent played a role in founding St. John's College, now the third oldest in the United States, after Harvard and William and Mary.

In any event, he was a wealthy man by 17th-century standards. After his death early in the 18th century, a detailed inventory of his holdings showed he was holding silver worth $10,000. If the value of his silver were compounded at even 3% over the past three centuries, it would be worth half a billion dollars today. Sadly I can report that did not happen.

Alas, when financial reverses in the wake of the Lehman Brothers collapse obliged me to sell Cedar Hill, it was worth magnitudes less than the $500 million benchmark.

The moral of the story is that if you wanted to turn an investment at the end of the the17th century into a flashy fortune, you ought not to have purchased a house in colonial Maryland (and the 500-acre tobacco plantation that went with it). You should have bought stock.

From the perspective of hindsight, you should have bought shares in the Bank of England. A mere £100 invested in Bank of England stock in 1694, assuming all dividends had been reinvested and there were no taxes, would have been worth £41,870,819 by 1945 (when the bank was nationalized).

Yes, the taxes would have diminished your gains, but you could have minimized their bite by staying alive during the whole holding period. Or could you? That was the type of feat claimed for Li-Ching Yuen, an herbalist who was born in 1677 and lived long enough to have his death on May 6, 1933, as reported in the New York Times.

Of course, determining the optimum path for deploying your capital is challenging enough without pairing it with the much harder challenge of figuring out how to triple your life expectancy.

Rather than worry about that, it could be more beneficial to consider what this recent episode of strength in housing prices says about investment in general. Here is my take:

The most up-to-date information on Americans' savings, Northwestern Mutual's 2022 Planning & Progress Study, revealed that the average amount of personal savings (not including investments) was $62,086 in 2022 (down from $73,100 in 2021).

The gap between the median home price and median personal savings has widened as the median home's worth shot up by $87,000. This underscores a crucial difference between the housing market and the stock market. Apart from the wealthiest stock investors the median American could not buy a house without financing.

Tesla Inc. is a high-priced stock at $815.12 — up $72.62 today. The fact that the Tesla share price is 15 times higher than it was three years ago is not harmful to the stock going forward. If anything, robust stock price growth tends to be positive for future stock movements.

It is not the same for house prices. When those prices soar, buyers are priced out of the market. And you can pretty much assume that the buying surge will be self-limited because the most alert and eager among the universe of potential buyers will have bought early — especially in a circumstance where interest rates on home mortgages were all but certain to go up.

Unless you lived under a rock, you knew that the Federal Reserve was poised to embark on a quantitative tightening program. They did just that. They have raised interest rates three times this year, and the price for a 30-year mortgage has risen more or less steadily.

That obviously translates into higher mortgage rates and, for prospective borrowers, steeper monthly mortgage payments. Consequently, homebuyers will realize that they would fare better, locking in a lower mortgage interest rate sooner than later. For this reason, a disproportionate share of the year's potential sales has already occurred.

The torrid pace of sales in the housing market will moderate, but this will not necessarily have a negative impact on stock prices.

Since 1984, I've been publishing an investing newsletter called Strategic Investment. For the last 38 years, my job has been to offer International and domestic insight financial recommendations and generate as much money as possible for my subscribers.