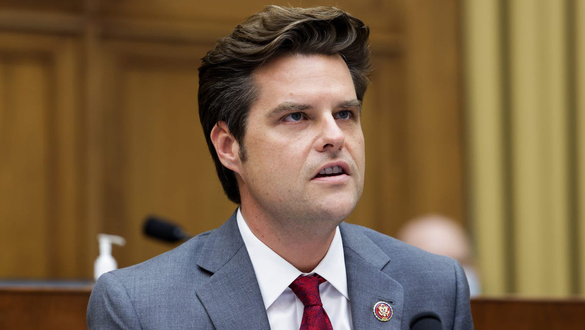 Florida Congressman is facing an investigation into six counts of misconduct. Federal Investigation is underway to determine if he is guilty of sex trafficking and having sex with an underage 17-year-old girl.

Republican Florida Congressman and Trump zealot Matt Gaetz increasingly appear to be stuck like a frog in a pot that could boil. He’s facing a Federal Investigation into whether he had sex with a minor and has committed wire fraud and sex trafficking. These allegations could be just the tip of a Federal Indictment he could face in the coming weeks and months.

On Friday, in a press release from the House Committee on Ethics, it was revealed that he now faces an investigation into allegations of sex crimes and other misconduct leveled at him…

“The Committee is aware of public allegations that Representative Matt Gaetz may have engaged in sexual misconduct and/or illicit drug use, shared inappropriate images or videos on the House floor, misused state identification records, converted campaign funds to personal use, and/or accepted a bribe, improper gratuity, or impermissible gift, in violation of House Rules, laws, or other standards of conduct,” the press release stated. “The Committee, pursuant to Committee Rule 18(a), has begun an investigation and will gather additional information regarding the allegations.”

The House Committee on Ethics statement notes that the investigation itself …

“Does not itself indicate that any violation has occurred or reflects any judgment on behalf of the Committee.”

“For the sophomore Florida Republican, the House probe is only the latest threat to his political future. It follows the news that a close associate, Joel Greenberg, is expected to plead guilty to a range of federal crimes and enter a potential cooperation deal with prosecutors that could add to the growing case against Gaetz. “

Political and legal observers believe that the move by Joel Greenberg to agree to a plea deal will result in Gaetz’s longtime friend and “wingman” turning government witness against him.