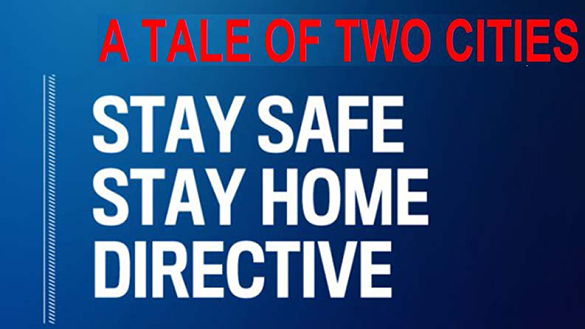 “Assume that this deadly invisible virus is everywhere, lurking in the shadows and looking for a willing host.”

England is under Lockdown

The U.K. is currently battling a new variant of SARS-CoV-2, the virus that causes Covid-19. The variant is thought to spread more easily than other coronavirus strains and has been blamed for a stark rise in cases in the south-east of England. But scientists don’t believe it causes more severe illness.

On Monday, Prime Minister Boris  Johnson announced a strict lockdown for England as the region struggles to contain the spread of a more easily transmissible coronavirus strain.

“With most of the country already under extreme measures, it’s clear that we need to do more together to bring this new variant under control,” Johnson said. “We must therefore go into a national lockdown, which is tough enough to contain this variant. That means the government is once again instructing you to stay at home.”

The lockdown will last until at least mid-February, he said. The new rules, which start as soon as possible, include closing nonessential shops and only allowing restaurants to provide takeout services.

Hospitals - More Covid-19 patients are being treated in English hospitals than at the peak of the first wave, statistics show, as the U.K. records its highest ever new case total.

Daily figures released by England’s National Health Service show 20,426 confirmed Covid-10 patients were in the nation’s hospital beds on Monday—an increase of more than 5,000 patients over the last two weeks. The figures show 1,641 of these patients were in mechanical ventilator beds.

The U.K. has topped 50,000 new daily cases for seven days in a row, recording 58,784 new cases on Monday, the highest since the pandemic started, as its publicly funded National Health Service (NHS) is under tremendous pressure from rising hospitalizations.

The England lockdown will be reviewed on Feb. 15, and in Wales, schools will be closed until at least Jan. 18.

The risk of getting coronavirus in Los Angeles County has never been greater.

About one in every five people getting tested for the coronavirus is positive — a quintupling since Novovember 1.

Los Angeles spokesperson has said the latest round of COVID-19 surge was caused in part by holiday gatherings, beginning with Thanksgiving and then Christmas and New Year’s Eve. Infections linked to the last two holidays will be apparent later this month, further jamming overwhelmed hospitals.

The Los Angeles Emergency Medical Services Agency issued two memos Monday instructing emergency responders to limit the use of supplemental oxygen and not transport patients who cannot be revived in the field.

“Given the acute need to conserve oxygen, effective immediately, EMS should only administer supplemental oxygen to patients with oxygen saturation below 90%,” one memo said. Oxygen saturation at that threshold and above allows for sufficient blood flow in most patients, the memo said.

“We are not abandoning resuscitation,” Dr. Marianne Gausche-Hill, medical director of the agency, told CBSLA. “We are emphasizing the fact that transporting these patients arrested leads to very poor outcomes. We knew that already and we don’t want to impact our hospitals.”

In Los Angeles County on Monday, an additional 79 coronavirus-related deaths and 10,851 new infections were reported. The county is now averaging 184 deaths a day over the last week — the equivalent of someone dying of COVID-19 every eight minutes — and about 13,500 cases a day, a count expected to grow because many testing sites were closed for the New Year’s holiday.

According to a Times tally of local health agencies, California posted a new single-day record for coronavirus cases Monday, logging more than 74,000.

That is 11% higher than the previous record, when 66,726 cases were registered on Dec. 28. The state is now averaging about 37,000 cases a day over the last week, down from a high of about 45,000 in mid-December. But the situation is still far worse than the beginning of December when 14,000 cases a day were recorded.

The risk of getting coronavirus in Los Angeles County has never been greater.

About one in every five people getting tested for the coronavirus are positive — a quintupling since Nov. 1.

And conditions are expected to worsen in the coming weeks as people infected during the winter holidays get sick.

“Everyone should keep in mind that community transmission rates are so high that you run the risk of an exposure whenever you leave your home,” Los Angeles County Public Health Director Barbara Ferrer said.

“Assume that this deadly invisible virus is everywhere, looking for a willing host.”

Experts fear spike of coronavirus cases after the holidays