Hannity Urges Trump: Pardon Himself and His Family Members 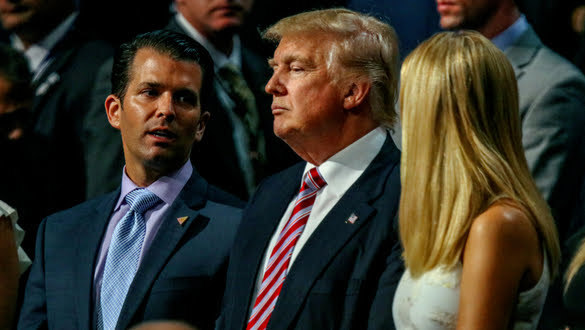 At Wall Street Rebel, we have repeatedly warned that President Trump will pardon himself and his three oldest children, Jared Kushner, for all crimes committed during and before taking office.  As each day passes, it looks like he’s going to precisely that.  Now Sean Hannity is pushing Trump to do exactly that.

President Trump is incredibly predictable and is panicking over his loss of the presidency because he knows he’s facing a possible hailstorm of federal criminal investigations and indictments – after he leaves office. Once a new US Attorney General takes over the Department of Justice he also knows that his three oldest children and Jared Kushner his son in law may be at risk.

Legal scholars differ on whether accepting a presidential pardon carries an imputation of guilt. The problem with accepting a pardon makes the person receiving and accepting the pardon look guilty in any case.

The problem that exists once Trump accepts a blanket pardon, particularly a pre-emptive pardons as Sean Hannity suggests, Trump, his family and other sycophants would lose their ability to assert their 5th Amendment rights not to answer any questions once put under oath.

If New York state or local authorities prosecute any or all of them, they would legally have to tell the truth and, if they have been served subpoenas, would have to turn over all requested disclosures and evidence.

If they get caught perjuring themselves, it could and would likely expose them again to federal prosecution. Given Trump and his three oldest children and Kushner are all under investigation in New York and the Trump Organization, taking Sean Hannity’s suggestion could make things much worse for the President for three reasons.

If for some reason, there was a groundswell and President Trump was in jail but won re-election in 2024, he’d still be at the mercy of the New York State penal system, and only the governor of New York could pardon him. Given the animosity of Governor Cuomo and AG Letitia James (likely the next New York Govenor)to Donald Trump and his family etc., there will be no pardons.

“We, in this hour — I am not told what to say, I don’t vet the information on this program that I give out,” said Hannity. “We have always been independent, follow our own path on this show. That’s not going to change for me, ever.”

This would mean Hannity hasn’t considered all the downside of recommending President Trump go the mass blanket pardons on Monday when talking with a pro-Trump lawyer and election fraud conspiracy theorist Sidney Powell.  Hannity literally gave his vocal endorsement for Trump to investigate his own White House and then pronounce his own degree of justice.

The Washington Post’s shocking story over the weekend, “20 days of fantasy and failure,” about President Trump’s behavior since realizing he lost tells the story of a man suffering psychological crises…

“…Trump refused to see it that way. Sequestered in the White House and brooding out of public view after his election defeat, rageful and at times delirious in a torrent of private conversations, Trump was, in the telling of one close adviser, like “Mad King George, muttering, ‘I won. I won. I won.’ ”

And yet, amid all this, Trump has managed to raise $150 million to retire his campaign debt, throw some money at the RNC for the Georgia senate race that will take place in early January. The rest of it, Trump will undoubtedly become a dark money pool he can use to pay his lawyers and hold more rallies. If he, family members, and other sycophants are indicted, his followers’ blind loyalty could raise another $500 million to $1 billion on an ‘I’m Fighting For You’ tour.

With this in mind, perhaps President Trump shouldn’t pardon anyone, not even himself. Better to grift a $1 billion, and make another few billion as an ex-president for several years and drag it. It could just get ugly enough to motivate people to vote Republican in 2024 or 2028 and end up back with Trump having to deal only with New York State.

Trump may consider a pardon for himself