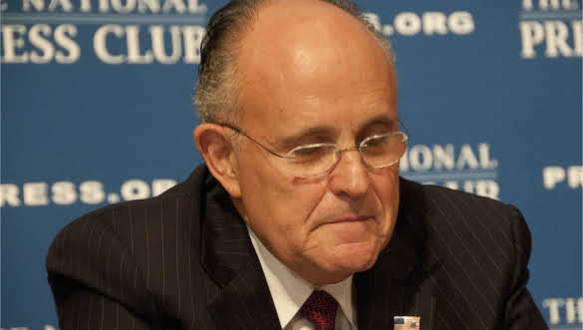 Sen. Lindsey O. Graham (R-S.C.) said Sunday that the Justice Department is vetting information that President Trump’s personal attorney has delivered regarding Hunter Biden’s work while on the board of a Ukrainian energy company. This is the same nonsense that has been repeatedly disproven and discredited.

The longest living United States Senator GOP Senator Lindsey Graham cited an early morning conversation with Attorney General William P. Barr, in which he reports that Donald Trump's corrupt personal attorney Rudolph W. Giuliani is giving his disputed disinformation to national security experts. Graham said he would back off his own plans to use the Senate Judiciary Committee as a vehicle to investigate the Biden family.

Graham, the chairman of the Judiciary Committee, said on CBS’s “Face the Nation.”

“The Department of Justice is receiving information coming out of Ukraine from Rudy to see — he told me that they had created a process that Rudy could give information and they would see if it’s verified.”

By skipping an open hearing, Lindsey Graham avoids putting Giuliani in a position where Democratic Senators could publically cross-examine the propaganda-driven lawyer that would expose the intentionally corrupted accusations wholly created by Russia’s intelligence services to steer attention away from its effort to get President Trump elected in 2016 and re-elected in 2020.

Graham himself warned that Giuliani might be getting bad information from his trips to Ukraine as part of a disinformation campaign by Russian security experts, citing their effort that disrupted the 2016 presidential campaign. Graham has also repeatedly denied that Russia intends and is doing the same thing to swing the 2020 election.

In just the recent 121 days, Republicans in the House and Senate to their immense discredit have delivered 30 different arguments of President Trump’s actions on Ukraine.

Senator Graham said on Face the Nation on Sunday that…

“If Rudy Giuliani has any information coming out of Ukraine, he needs to turn it over to the Department of Justice, because it could be Russian propaganda.”

During the interview on the FOX, far-right conspiracy riddled talk show, the former New York City mayor made many outlandish claims about the information he has cobbled together from Ukrainian sources and said Graham should use his committee to investigate the Biden’s.

During the FOX interview, Giuliani repeated his often used promise…

“Lindsey, get started. Yes, I have — I have what I used to call when I was U.S. attorney, a smoking gun.”

Then,  just as “Face the Nation” started Sunday morning, Trump tweeted out urging Graham to launch some undefined investigations. Evidence the President’s insanity and drive for vengeance for being impeached with cause…

“He must start up Judiciary and not stop until the job is done. Clean up D.C. now, last chance,” Trump said in the tweet, which CBS’s Margaret Brennan read to the senator on air. 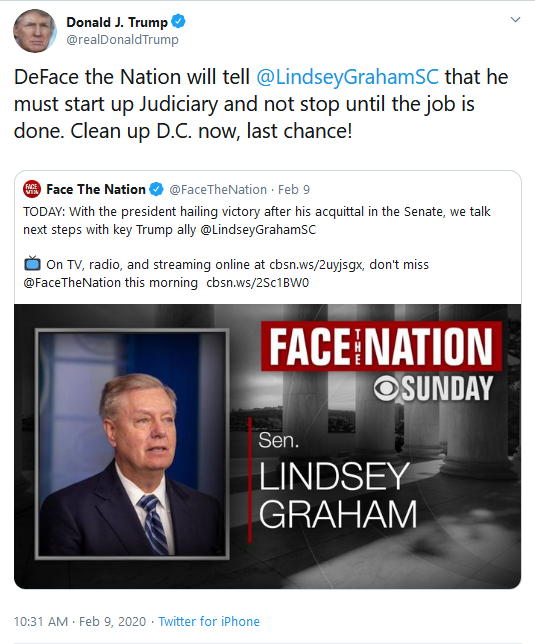 Graham appeared to be backing away from Giuliani accusations in recent weeks that he would lead a probe into former vice president Joe Biden’s time overseeing Ukraine policy while his son served on the board of Burisma, a Ukrainian energy company. He has abruptly prostrated himself to the madness of President Trump, as evidenced by his reaction to Trump’s tweet…

“I’m not going to be the Republican Christopher Steele.”

Indicating he has no interest in any moderation or truthful approach to the Giuliani accusations. Lindsey Graham said that after talking to Attorney General Barr and Senator Burr, he is worried Giuliani’s information might not be trustworthy and has no intention of allowing a public hearing in which Giuliani would be confronted with his lies and corruption….

“Take very cautiously anything coming out of Ukraine, against anybody,”

Graham is once again taking the position where he was in this early fall, saying that he would focus his committee work on the FBI’s handling of the 2016 investigation and how surveillance warrants were obtained.

By late November, at the urging of President Trump Graham had once again soaked in enough of Giuliani’s and Trump’s madness to send a letter to the State Department requesting documents related to Biden’s 2016 calls to the then-president of Ukraine, Petro Poroshenko, who lost his reelection bid last year to Volodymyr Zelensky.

Trump’s legal team mounted a defense in the Senate impeachment trial that suggested the president was warranted in asking Zelensky to investigate Burisma  Holdings for corruption — an apparent effort to rebut testimony from administration officials that his motive was to hurt the former vice president’s 2020 presidential campaign.

Biden’s work to pressure Ukraine to fire a top prosecutor had bipartisan support in Congress, where many maintained that a shake-up in that office would lead to more aggressive anti-corruption investigations.

What’s happening now: The Senate has voted to acquit Trump on both articles of impeachment.

How we got here: