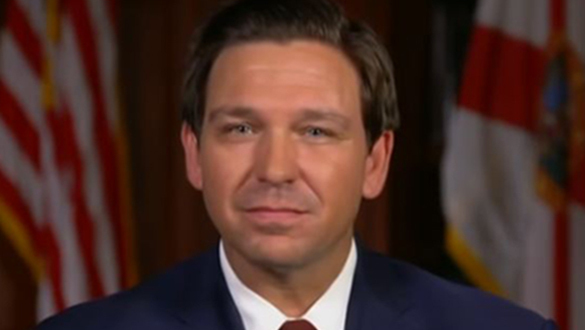 Florida has the worst numbers of Covid-19 infections and hospitalization in the United States. Despite this, Florida Gov. Ron DeSantis has signed an executive order to issue emergency rules for "protecting the rights of parents," making face masks optional across the state in schools and leaving it up to parents, and preventing schools and local governments from imposing mask mandates.

DeSantis is in dual campaign mode. He's running for re-election for the governorship in 2022 while transferring the country in preparation to run for President of the United States in 2024 should Donald J. Trump decide not to run.

This past week the CDC updated its guidelines to recommend people in K-12 schools should wear a mask indoors, regardless of vaccination status. The recommendation is designed to protect non vaccinated citizens, keeping in mind that 97% of those hospitalized with Covid-19's Delta variant are those who refused to take one of the vaccinations offered for free throughout the state of Florida and the United States.

While DeSantis' move won't ban masks outright, he made clear that students whose parents want them to wear masks should be free to do so…

"We think that's the most fair way to do it,"

DeSantis also pointed out that he doesn't make his own three small children wear masks — and joking, they wouldn't wear them correctly for long anyway if they did.

One can only wonder if one of his children or others in the state and school teachers end up infected, hospitalized, and die. How would DeSantis not be guilty of negligent homicide?

He has said very recently that he may call Florida lawmakers into special sessions if local school districts enact mask mandates of students.

DeSantis also has said he won't re-enact a state of emergency despite Florida leading the nation with 20% of all new COVID-19 infections — a spike primarily driven by the delta variant.

DeSantis is strengthening a possible future prosecution for negligent homicide by ignoring the health emergency taking place in Florida with all these moves. DeSantis, a graduate of the U.S. Naval Acadamy, a school that specializes in math, and sciences has no excuse; he can't claim ignorance as a defense if his executive orders that lead to the deaths of children and teachers who are exposed to the highly infectious Delta Covid-19 virus and possible future mutated variants.

"Our Governor continues to prioritize his own political agenda over the health and well being of Floridians by going after masks,"

"Meanwhile, homelessness and poverty are legitimate issues he could be focused on. But NOPE, let's keep on w/the culture wars & endanger lives."

"Whether it is mandating a pay plan that requires teachers with 15 years of experience to be paid the same as a first-year teacher or telling locally elected officials they cannot enforce recommendations from the American Academy of Pediatrics, Gov. DeSantis continues to think that Tallahassee knows best what all Floridians need,"

"We ... ask Gov. DeSantis to allow all Florida's citizens to have a voice by empowering the elected leaders of cities, counties, and school districts to make health and safety decisions locally based on their unique needs and circumstances."

Still, both the Florida Education Association President Andrew Spar and State Rep. Anna Eskamani are ignoring the risk of not only a few children and teachers deaths as a result of his anti-mask policies but the real danger of dozens, perhaps hundreds of deaths. His indifference to the danger and lack of proper steps to protect Floridians may amount to his eventually facing indictment for Negligent Homicide.

Should the rate of infection and number of deaths surpass the May 2020 highs in Florida, DeSantis will face a barrage of lawsuits by those who become seriously ill and families of those who die. While he is governor, all of his negligent decisions will fall on the Florida taxpayer. Still, a charge of negligent homicide that's credible could end in his criminal conviction and incarceration. At the very least, by taking the steps he's taking instead of trying to do everything he can to prevent infections and the deaths of Floridians, he may be ending his political career.