GOP’s Ben Sasse: Trump was ‘delighted’ about the DC Riot 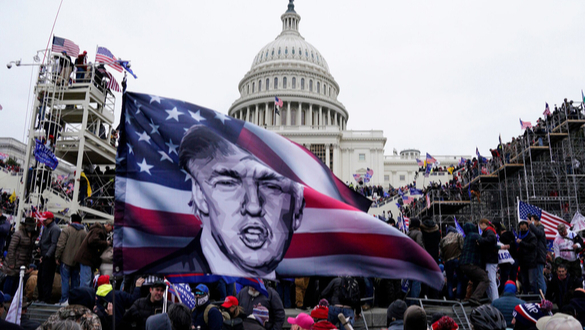 Trump was so happy about the riot he unleased. He was genuinely “confused” as to why others in the White House weren’t as “delighted.”

After all the hell that broke loose in Washington on Wednesday, January 6, 2021, President Trump claims he immediately called out the National Guard. The day’s events were a carefully designed plan devised in the President’s diabolical mind to create the most significant degree of chaos. A day that was in the planning and publicity stages for weeks.

Trump threatened Vice President Pence before he made his way to the Capitol Building to ceremonially preside over the Electoral Vote count.  For days Trump relentlessly badgered Pence to break protocols and illegally overturn the election and declare him President of the United States or  ‘there would be ramifications”. Pence repeatedly told Trump he didn’t have the authority to overturn the election and wouldn’t even if he could because it would be a terrible precedent. Pence had no idea that Trump intended to set off a riot that could literally end in his vice president’s death.

Hearing Pence’s refusal, Trump is said to have told his VP he didn’t want to be his friend any longer.

Yesterday during an interview with conservative radio host Hugh Hewitt and Trump sycophant, Sen. Ben Sasse (R-NE) was queried about his assessment of President Donald Trump’s state of mind.  He was asked about the culpability in the run-up to and during the “Keep America Great” mob’s riot that resulted in assaults, looting, and as of now, five deaths, including a Washington Capital police officer.

Sasse responded by insisting the violent “Keep America Great” mob was “incited by the President of the United States,” and also added he believes that Trump is “addicted to division”…

“This is a deep brokenness in his soul. ... Donald Trump is a guy who hurts. And I hurt for him at an anthropological and a human level, but at a level of his oath of office to the Constitution, the duty of the President of the United States is to preserve, protect and defend the Constitution,” Sasse said. “And the President is addicted to social media and television, and division, and he’s been lying to the American people for eight straight weeks and planned it long before. No matter what was happening in any state, he was going to say the election was being stolen, and the people needed to rise up.”

Sasse stressed Trump “repeatedly said to ‘go wild’ when you get to the Capitol” during his Wednesday morning address to his mob. This also came after Rudy Giuliani urged the angry #MAGA crowd to conduct a “trial by combat” of lawmakers as they prepared to vote to certify President-elect Joe Biden’s win.

“I think Donald Trump wanted there to be massive divisions, and he was telling people there was a path by which he was going to stay in office after January 20,”

“That was never true. And he wanted chaos on television. I don’t have any idea what was in his heart about what he wanted to happen once they were in the Capitol, but he wanted there to be chaos, and I’m sure you’ve also had conversations with other senior White House officials, as I have.”

“was walking around the White House confused about why other people on his team weren’t as excited as he was as you had rioters pushing against Capitol Police trying to get into the building.”

“That was happening. He was delighted.”

You can find the full transcript of the interview at HughHewitt.com. The infamous January 6, 2021 riot set off by Trump and his supporters now has him looking for outside legal counsel over growing fears that he may be impeached for a second time, according to CNN’s White House correspondent Jim Acosta.

There’s a groundswell among both Democrats and Republicans backing either censure or second impeachment of President Trump. Speaker of the House Nancy Pelosi expected to file articles of impeachment against Donald Trump next week. CNN said the President is seeking outside counsel for advice on dealing with his second impeachment that could lead to him being banned from running for President again in 2024.

House Speaker Nancy Pelosi (D-CA) said Friday that the House would move to impeach the President if he wasn’t removed by Vice President Pence and the Trump Cabinet using the 25th Amendment. It now appears the Democrats are drawing up articles of impeachment that will be introduced sometime next week. If convicted, Trump would be barred by law from running for President in 2024.

According to the Atlanta Journal-Constitution, the Republican Attorneys General Association (RAGA) spent money organizing the turn out for the “Keep America Great” event for Wednesday’s insurrection at the US Capitol.

How President Trump could be prosecuted for inciting violence