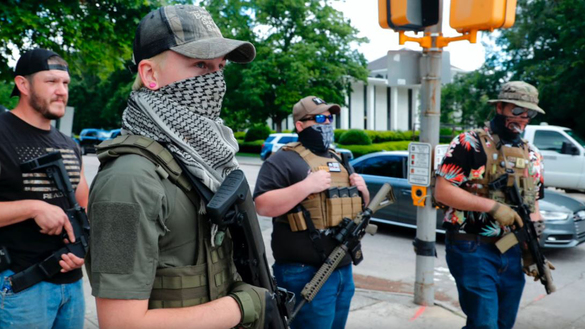 Congressman Clay Higgins, posted a photo on Facebook showing Black protesters carrying guns and wrote… “the mere sight of them walking around armed was all the justification he needed to kill them.”

If there was any doubt about Congressman Clay Higgins (R-LA) being a radical white supremacist racist, it has been completely dispelled. Every person of color in this country must understand before the vote this year that there are those in the Republican party like Higgins and President Trump who are proud white nationalists/supremacists.  They would gladly strip them of their Constitutional Rights and throw them in the chains of slavery if they have the chance.

According to The Acadiana Advocate, Congressman Higgins wrote a Facebook post about shooting armed Black demonstrators that Facebook felt compelled to remove for violating its policies against advocating for violence.

“Nothing personal,” we just eliminate the threat. We don’t care what color you are. We don’t care if you’re left or right. If you show up like this, if we recognize threat… you won’t walk away.” 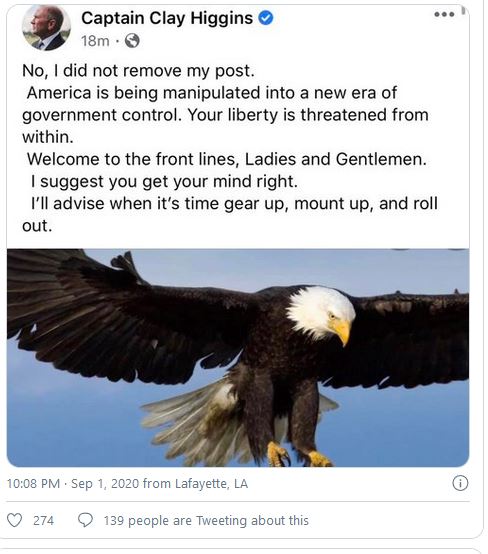 White protesters many of who are far-right Neo-Nazis, white Aryan Nation, white supremacists and nationalists from literally dozens of organization have been showing with AR15 and AK45 weapons of war to protests all around the country for the most of the past 20 years. So, given his failure to object to their carrying these same weapons or even more lethal renders, Congressman Higgins's assertion that his comments “aren’t personal” and are not racist is an outright lie. Many will conclude that the weapons being carried are not the threat Higgins is talking about; It the color of the skin of protesters that determine the threat level.

Higgins made matters much worse by writing a defiant follow-up post after Facebook removed his original rant and threats to shoot down (drop) any protesters carrying weapons. This just further proved he’s a racist scumbag that should be censured by Congress for his racist rhetoric…

“America is being manipulated into a new era of government control.”

“Your liberty is threatened from within. Welcome to the front lines, Ladies and Gentlemen. I suggest you get your mind right. I’ll advise when it’s time gear up, mount up, and roll out.”

On April 29, 2020, hundreds of angry demonstrators, some of them armed with rifles, stormed Michigan’s State House on Thursday to protest stay-at-home orders — terrifying lawmakers. They wore bulletproof vests to protect themselves.

The protesters forced their way into the Capitol in Lansing to urge Michigan officials to end a state of emergency to battle one of the worst COVID-19 outbreaks in the country at the time.

Higgins never once objected to those white protesters carry weapons of war or advocated for shooting those protesters on sight.