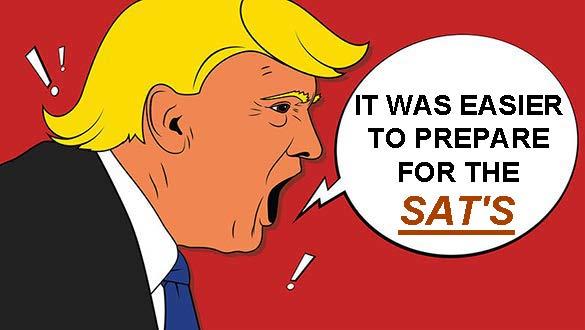 If you thought the ABC town hall with George Stephanopoulos was a combination of a train wreck and a dumpster fire, wait for the first presidential debate between Trump and Biden on Tuesday, September 29, that Chris Wallace will moderate - 12 days from now.

“Do not underestimate former Vice President Joe Biden’s skills as a debater. The gaffe-prone Biden has been known to make missteps during his speeches, but he can be both skillful and aggressive when it comes to debates.”

Chris Christie’s warning comes as NBC News’ sources are reporting that President Trump has no plans what-so-ever for traditional debate preparation in September or October. In Trump’s book Art of the Deal, he took pleasure in boasting he never plans; he shows up at his offices and makes calls and lets things happen. That may be why he’s bankrupted several businesses, including two casinos.

Trump’s refusal to prepare shows how overconfident he is – and how unprepared he will be for at least the first of three presidential debates is scheduled for September 29 in Cleveland. Trump is clearly buying into his own rhetoric that Joes Biden is handicapped in some way intellectually, and Biden won’t perform well and that he will commit gaffes that will ruin his debate performance.

In 2016, Former Governor Christie helped Trump with debate preparation, playing Democratic presidential nominee Hillary Clinton in mock debates. This time around, according to NBC News, Trump is outright refusing to that type of help and preparation this time and insists that debating an opponent in real-time…“isn’t something he has to practice.” After all, he’s a stable genius!

“It’s not traditional, ‘We need Chris Christie to fill in and play Hillary Clinton’ like we did four years ago.”

Trump’s Republican allies, many of them on the down-ballot in too tight races, according to NBC News, are privately panicking and concerned that Trump’s overconfidence could hurt, will hurt him, and them in the debates with Biden.

Bill Stepien, the 2020 Trump campaign, says he has been reviewing films of Biden’s debates, and there are plenty to choose from…

“There were times when Biden didn’t perform well in debates — for example, some of the early debates in the 2020 Democratic presidential primary. But in other debates during that primary, he performed well when everyone from Sen. Bernie Sanders and Sen. Elizabeth Warren to Sen. Kamala Harris (now his running mate) went after him with a vengeance. Biden also held his own during that primary’s final debate: a one-on-one with Sanders, who can be a fierce debater and is a superb speaker.”

Bill Stepien, Trump’s 2020 campaign manager, told NBC News that he acknowledges that Biden is “formidable on the debate stage…

“(Biden is) a politician. He gives speeches. He’s really good at doing it. He’s also very practiced at it.”

In 2008 — when Biden was Barack Obama’s running mate and was getting ready to debate GOP vice presidential nominee Sarah Palin — Democratic strategists advised avoiding being too aggressive with the then-governor of Alaska and avoided coming across as a bully. That clearly won’t be the strategy when Biden debates Trump, who is in many ways the ultimate insult bully, who has no compulsion to lie nonstop, even when he’s fact-checked. Trump will double down on any number of lies when he speaks off the top of his head.

“I’m looking forward to getting on the debate stage with Trump and holding him accountable. I think I know how to handle bullies. We’ll find out.”

You can bet Biden will practice and prepare for the debate. He has a reputation of being a determined studier who will show up to the debate being thoroughly prepared.