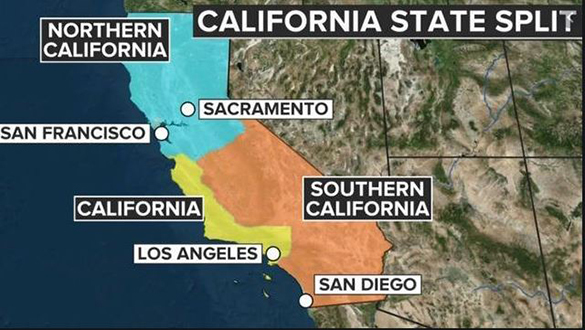 California is moving left to the point that its House Delegation may become ultimately (100%) Democrat after this general election votes are added. This could lead to California being split into two states a Northern California and Southern California.

The stage was initially set in the aftermath of the 2018 midterm election, in which the Republican Party was decimated by a “blue wave” election result that saw 40 Republicans lose their House seats and, in the process making Rep. Nancy Pelosi (D-CA) the House Speaker again.

As we approach the 2020 election in just less than 22 days, there are already rumblings of “discontent” with House Minority Leader Kevin McCarthy’s who faced incredible criticism over the 2018 election results. Current projections indicate that the House Republicans could lose another 15 seats.

According to Washington Post’s Rachael Bade…

“A cluster of GOP lawmakers is starting to privately question whether the California Republican is putting loyalty to the president over the good of the conference. And a small group of members is discussing whether someone should challenge him for minority leader if Trump is defeated Nov. 3.”

“There’s no doubt that Kevin McCarthy is a Trump loyalist, through and through. Moreover, he and President Trump could be thrown out of office if this ugly political environment for Republicans becomes a Tsunami. With the potential of Republican leadership and control of the U.S. Senate wiped out. I think the challenge for everyone in the Republican conference is, at some point, there will be a post-Trump world — whether that’s coming in three months or later. What direction does the party go?”

“The House Republican minority is likely to thin quite significantly after this election.”

According to a report from the conservative Washington Examiner, McCarthy’s job was expected to be on the line even if Republicans picked up a few seats while Trump lost, but now it may not be a loss of his position as the minority leader seat in the House. This may mean that no one in Republican leadership may be left to take the “fall” for losing not only the White House, Senate, and another 10-15 House seats.

Republican voter says Trump is taking down the whole ticket

A blue tsunami will automatically guarantee that the District of Columbia will become a state in the first year of a Joe Biden Presidency. A vote will be set by next November in which Puerto Rico can vote for statehood. That would increase the number of Democratic Senators by four more nationally. Then there’s California.

The state of California could also vote to split into two states a Northern and Southern California. This would create a new Democratic Governor and two original Democratic Senators, something Democratic politicians would love to see happen.  The wipeout of the GOP in California now possibly divides the state into two states and assuming Washington DC and Puerto Rico become states as well, it would add six additional U.S. Senators and cement control of the country’s political future for the next few decades.