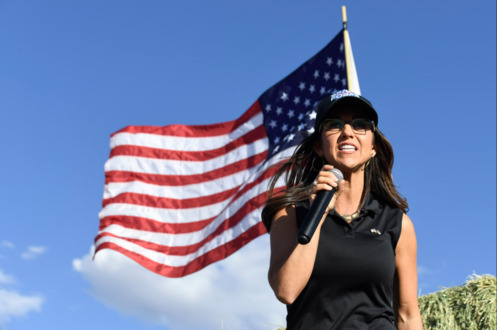 Rep. Lauren Boebert (R-CO) called for the immediate removal of President Joe Biden and replacing him with "righteous men and women of God."  She insists that the church should have authority over the U.S. government.

Those who have chuckled over claims that the Republican party is moving toward becoming the American Taliban have no reason to laugh any longer.

Rep. Lauren Boebert (R-CO), a now endangered congresswoman thanks to the non-partisan redistricting that will take the place of Colorado's congress districts, has literally espoused a violent revolution to overthrow the United States government, saying, "We are the sons and daughters of revolutionaries" and calling on right-wing Christians to remove President Biden from office.

This latest rant is pure and straightforward sedition and not freedom of speech. The Department of Justice should open a criminal investigation into Boebert immediately.

The Colorado Republican Congresswoman spoke Saturday at a conference hosted by the right-wing Truth & Liberty Coalition at Charis Bible College. She called for the impeachment of Biden and Vice President Kamala Harris as part of a conservative Christian revolution against democratically elected leaders, reported Right Wing Watch saying…

"When we see Biden address the nation and the world and show more contempt and aggravation and aggression towards unvaccinated Americans than he does terrorists, we have a problem, and that's why I have articles of impeachment to impeach Joe Biden, Kamala Harris."

"I need you speaking up. I need the world to hear your voice. You know the word of God, and you know that there is power in your words, that words framed the world. You have the Lord God Almighty on your side. I need you to use your voice and speak."

She went total theocracy by telling attendees the Bible had permitted them to impose their views on their political rivals. This is precisely the position of the Taliban, Al Queda, Iranian Clerics, and violent Muslim terrorist groups. It should be a clear signal to Catholics, Jews, Sieks, Agnostics, Atheists, and the dozens of other non-evangelists that the Republican Party has gone full fledge ahead with trying to overthrow our pluralistic democratic government and replace it with a theocracy. Her vision of America would force the conversion of every American to evangelical Christianity…

"It's time the church speaks up; the church has relinquished too much authority to government. We should not be taking orders from the government; the government needs to be looking at the church and saying, 'How do we do this effectively?"

This is the true face of Trumpism. A man with no morals, a liar, a cheat, and a man who has no understanding of the teachings of Christ has transformed the Republican Party into a religious hate organization that is dedicated to establishing a disgusting theocracy of morons.

The FBI should interview Breitbart, and if her statements are accurately reported, she should be arrested and tried for sedition and to effect a violent revolution.