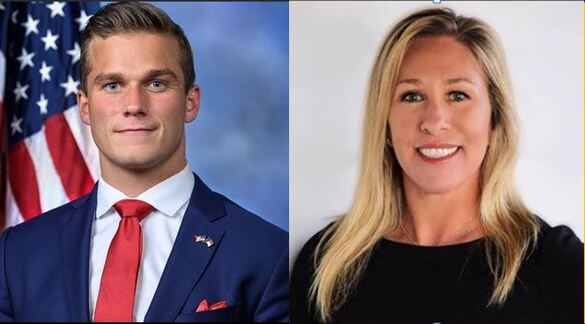 Mitch McConnell, the Senate Minority Leader, minimized his party's Russia acolytes on Sunday, even though they have reiterated many of Russian President Vladimir Putin's talking points while his deadly assault of Ukraine proceeds. Appearing on CBS' "Face the Nation," McConnell said, "the vast majority of the Republican Party writ large, both in the Congress and across the country, are totally behind the Ukrainians." "There may be a few lonely voices off the side," he added. "I wouldn't pay much attention to them."

The GOP's support for Ukraine has long been in doubt, even before Reps. Madison Cawthorn of North Carolina and Marjorie Taylor Greene of Georgia started spouting Kremlin talking points publicly. Republicans overwhelmingly supported then-President Donald Trump during his impeachment trial in which he was accused of withholding defense weapons from Ukraine for political gain.

Regardless, McConnell knows Cawthorn's and Greene's open embrace of pro-Russian arguments is out of step with most Americans and, thus, politically dangerous. Now he's simply trying to wipe them from our consciousness…

In Cawthorn's case, his diatribe condemning Ukrainian President Volodymyr Zelenskyy and his administration has already been plastered across Russian state media. Propaganda like that is helpful to the Kremlin in maintaining support for the invasion, and that support has helped the war continue on as it has. In that way, Cawthorn has and can undermine the United States' diplomatic interests all on his own. The fact he might be "lonely" in his views — as McConnell claims — doesn't prevent him from doing harm.

Greene doesn't appear to have had her big break on Russian TV, but she's well on her way. She has hewed close to Kremlin talking points, including in a video she released last week that essentially called for the U.S. to stop supporting Ukraine's defensive efforts against Russia.  "It's not our responsibility to give Zelensky and the Ukrainian people false hope about a war they cannot win," she claimed. McConnell can't deny that their comments are empowering Russia, if only by providing fodder for it to spread to the masses. That can't be forgotten or ignored." — Ja'han Jones, MSNBC, March 21, 2022

Back in the glory days of Roger J.Stone Jr.'s work in Donald Trump's 2016 campaign, Stone was entrusted by candidate Trump with drafting pro-Russia social media posts. As you will recall, the campaign featured squabbles about "Russian interference" that allegedly titled the election in Trump's favor. Stone was entrusted with the delicate task of drafting pro-Russia tweets, extolling a Russian "peace plan," among other things.

Stone's jail term stemming from his conviction on seven felony charges of impeding a congressional investigation into the 2016 Trump campaign was commuted by Trump in the last days of his presidency.This pardon spared Stone the indignity of wasting 40 months in federal prison and 24 months of supervised release. It also spared him from a fine of $20,000.

Stone seems to have maintained his pro-Russian stance on his own. More than a sprinkling of Republican political elites have lined up to back Putin and his barbaric invasion of Ukraine, as the sentence mentioned at the top of this piece demonstrates.

I suppose I should admit to a predisposition. I'm not a big admirer of  President Joe Biden. But I applaud the former Vice President's accurate assessment that Kyiv, Ukraine, is home to the world's most beautiful women.

He is widely reported, "I cannot believe that a Frenchman visiting Kyiv went back home and told his colleagues he discovered something and didn't say he discovered the most beautiful women in the world," Biden quipped, "That's my observation."

Biden commented in discussion with former Ukrainian President Viktor Yuschenko, adding, 'it's certain you have so many beautiful women."

I agree. Courtesy of the internet, which can cover continents in seconds, I became acquainted with several spectacular Ukrainian beauties, the most spectacular of whom was Anna, a model featured on the covers of six international editions of Playboy.

Corresponding with Anna amounted to a private tutorial on the allures and drawbacks of life in Ukraine. Among other things, she confirmed the widely circulated allegation that Ukraine is corrupt. Her father died and left her an insurance legacy. Before long, she reported that her father's attorney was attempting to steal it.

At first, she made little headway. Then she reached out to me for a loan she said was required to bribe the judge in her case. As she reported it, no matter how strong the substance of a case may be, to succeed in Ukrainian courts, you need funds to bribe the judge and facts on your side. She won that case.

I hope the indiscriminate Russian bombing does not make a casualty of her for more reasons than one.

I admit to being peeved about the ravings of Congress Folk Madison Cawthorn and Marjorie Taylor Green and talking heads Roger Stone and Tucker Carlson. They lend credibility (of a kind) to Putin's dirty war that is killing the "most beautiful women in the world." What a waste.

Not that it would be any more civilized to indiscriminately bomb Ukraine if every Ukrainian woman still resembled Mrs. Khruschev.

A close look at the founders of fascism, Mussolini and Hitler, shows that they were men of the Left. Also, The confused Congress folk, in particular, give contemporary conservatism a bid name. They contribute to the acceptance of the political factoid that fascist authoritarianism is a perspective that appeals to conservatives.

Hitler, who was named "Man of the Year" by Time magazine in 1938, entered politics as a member of the Left.

Hitler had to deal with the charge that he was a "Bolshevist" or Communist from the very beginning of his political career, which came from the Right. In his earlier years, Hitler belonged to the German Workers' Party (later known as the NSDAP) before becoming a member of the National Socialist German Workers' Party. Hitler never described himself as being a right-wing politician but constantly criticized both left-wing and right-wing political movements and parties to the same degree. See the following typical passages from the report on a speech Hitler gave on October 26, 1920, for example:

"Now Hitler turned to the Right and Left. The national Right lacked a social concept, the social left a national one. He admonished the right-wing parties: if you want to be national, then climb down to your people and away with all this class conceit! To the left, he called: you who have declared your solidarity with the whole world, first show your solidarity with your own national comrades, become Germans first! … You who are truly revolutionaries; come over to us and fight with us for our whole nation! Your place is not over there as drovers for international capital, but with us, with your nation!"

My party consisted of 90% of people from the left. - Hitler

As Rainer Zitelmann reports, when Hitler recalled his struggles in monologues to his inner circle on November 30, 1941, he said: "My party at the time consisted of ninety percent of people from the left. I could only use people who had fought." It's clear that this was an exaggeration. Still, subsequent investigations of the NSDAP membership data by political scientist Jürgen W. Falter have shown that workers constituted 40% of the National Socialist Workers' Party's membership. Voters for the party are no exception.

Equally, Mussolini unequivocally came to politics as a man of the left. He was named after prominent Left-wing politicians. His first name Benito was after Mexican president Benito Suarez, while his middle names Andrea and Amilcare were selected in honor of Italian socialists Andrea Costa and Amilcare Cipriani.

Of course, Mussolini had no role in naming himself. But his namesakes testify to his parent's leftwing background. By 1912, Mussolini was named editor of the Socialist newspaper Avanti. And he became a member of the National Directorate of the Italian Socialist Party.

Mussolini's views migrated similarly to those of Hitler. They came to center more on nationalism than socialism. Like Hitler, Mussolini concluded that world war had proven that nationalism was more important than class conflict. A similar crackpot view inspired Mussolini's foreign policy to that of Hitler.

Both seemed to imagine that a lack of space-constrained the prosperity of their nations. Mussolini sought spazio vitale (vital space), a concept in Italian fascism analogous to Lebensraum in German National Socialism.

The historical record shows that authoritarian fascism emerged not as a progression from conservatism to some more extreme right views but as a movement of the left as represented by Hitler and Mussolini.

None of this makes Putin's Republican and so-called conservative enablers any the less distasteful. As is so frequently the case in politics, it is disconcerting to observe how bewildered many strong voices are regarding fundamental political and economic ideas.

My years spent researching financial crises have also taught me that hard-working people usually suffer the most... The savers... the taxpayers... the people who "follow the rules" are the ones who bear the brunt of the consequences. Sign up for my newsletter, Strategic Investment, and stay in the loop.