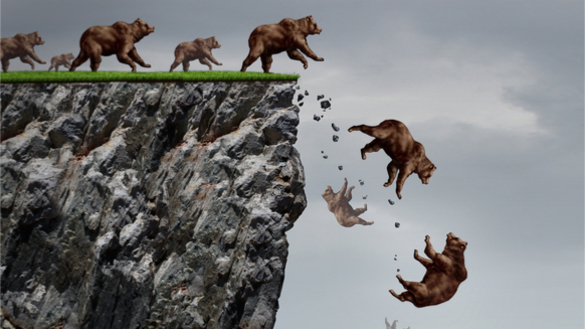 Markets are said to be in bear territory when stocks fall at least 20% on average from their peak point. But 20% is an arbitrary amount, just like 10% is an arbitrary threshold for corrective action. In a bear market, investors are less willing to take risks than they are ready to take risks. In a long-term bear market, investors avoid risky investments in favor of more predictable ones.

Symptoms of a Bear Market

A symptom of increased pessimism about the economy's outlook is that the S&P 500 is projected to open in bear market territory on Monday, representing a 20 percent loss from January's levels.

The forecast for interest rates and corporate profits was thrown into disarray as a result of higher-than-expected inflation and lower-than-expected economic growth, which caused markets all over the world to crash. The stock markets in Asia and Europe saw losses, investors sold off government bonds, the price of oil declined, and cryptocurrency values plummeted.

As a wave of selling activity proceeded, U.S. stock futures indicated that the market was about to open with a significant drop. Last month, the S&P 500 index made a momentary descent into a bear market. Still, it quickly recovered and finished the month barely above that threshold. Since then, the financial markets have been very volatile, with the S&P 500 experiencing its largest weekly drop since January last week.

"within one bad day's move of a bear market, and equity futures suggest that we haven't seen all the negative emotion expressed yet," analysts at ING wrote in a note to investors on Monday morning regarding the leading U.S. stock index. In nine of the last ten weeks, the S&P 500 has ended the week with a loss.

A report that was released on Friday showed a surge in inflation in the United States, which shook the markets. Investors were concerned that the Federal Reserve might have to raise interest rates higher and more quickly than expected to rein in rising prices, which is a move that could hurt the economy in the United States.

Investors from all over the world sold stocks, bonds, and other assets because inflation rates are rising rapidly in a number of nations, supply chains are still tangled up, and economic growth projections are being lowered.

Asia's stock markets ended the day in the red, with Japan's benchmark Nikkei 225 index down 3 percent and South Korea's Kospi falling 3.5 percent, respectively. Shares in Hong Kong had a decline of 3.4%, while an index measuring the performance of China's largest businesses that are listed in Hong Kong declined by 3.6%. The value of the Japanese yen reached its lowest point against the United States dollar in 24 years.

On Monday, fears in the region were amplified due to the reimposition of social distancing measures by officials in Beijing and Shanghai in response to another round of mass testing that took place over the weekend. The "zero Covid" pandemic policy that China implemented earlier this year resulted in large parts of the country being placed under some type of lockdown for several months, which had a negative impact on the country's economic growth.

Economists had anticipated a modest acceleration in economic growth. In the early going of trade in Europe, the Stoxx 600 index has dropped by 2.3 percent, reaching its lowest level since the beginning of 2021. The unexpected contraction of Britain's economy in April resulted in a drop of 0.3 percent from March's level, which caused the FTSE 100 to suffer a loss of 1.6 percent.

Bond prices in Europe experienced a precipitous decline as traders priced in the likelihood of a series of interest rate hikes to be implemented by the European Central Bank (ECB) in response to high inflation throughout the eurozone. The yields on German and Italian government bonds, which move inversely to prices and have hit multiyear highs, indicate a significant rise in the costs of borrowing money.

The value of cryptocurrencies, which some think could function as a safe haven in times of inflation and turbulence, has also been significantly damaged. The price of Bitcoin, the most popular cryptocurrency, dropped to a level that is around 18 months low. It has lost around half of its worth to this point in the year. According to Coinmarketcap, the total value of all cryptocurrencies has dropped below $1 trillion for the first time since early 2021. This represents a decline of approximately $2 trillion from their all-time high.

The S&P isn't yet in a bear market: Wharton's Jeremy Siegel