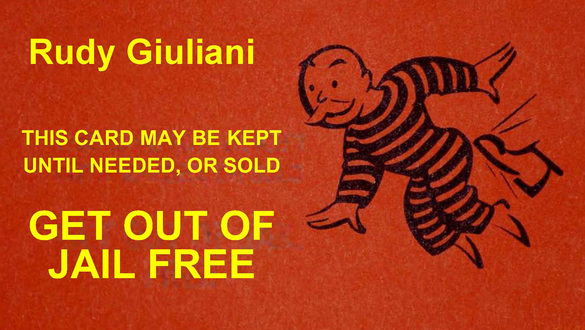 It’s being reported that four people died after Eric Trump, Rudy Giuliani, and President Trump whipped up their now infamous January 6, 2021 insurrection. As a former U.S. attorney, he knows he could be charged with half a dozen crimes, including reckless homicide and murder.

Rudy Giuliani was one of the main speakers who whipped up tens of thousands of angry pro-Trump protesters Wednesday at their “Save America Rally.” He urged the angry #MAGA crowd to conduct a “trial by combat” of lawmakers as they prepared to vote to certify President-elect Joe Biden’s win.

Trial by combat derives from ancient Germanic law in which individuals settle disputes through armed combat.

Those words have only one nefarious possible meaning, a call to violence. As was the case with President Trump’s video, he wants not to be held responsible for the destruction, assaults, and deaths caused by his involvement in inciting the crowd with his call for violence while saying it was justified. 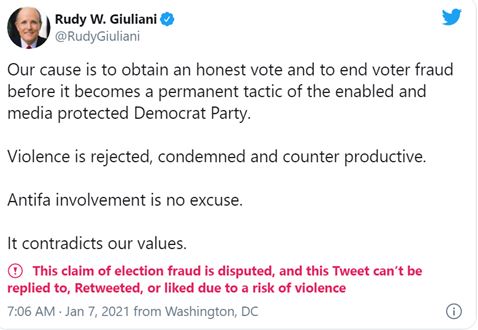 The Trump lawyer attempted to covered his backside by Tweeting a “violence is condemned” statement after literally telling the crowd this was a “trial by combat” situation and then went on to defend the rioters as driven by a righteous cause.

It’s a disgusting, worthless attempt given Giuliani’s omitting how his own outrageous conspiracy theories he’s been pushing claiming President Trump’s election loss to Joe Biden was the result of election fraud without any evidence he could present in dozens of courts. These lies about the election and his call for “trial by combat”  can only be construed to insight and fuel the mob to justifiable violence.

Making it worse, Giuliani’s  Twitter message, “Our cause is to obtain an honest vote and to end voter fraud before it becomes a permanent tactic of the enabled and media protected Democrat Party,” continues to target hatred towards Democrats and the press. In doing so, he hasn’t mitigated his involvement in the riot. Many legal experts will affirm his latest cover-his-ass Tweet is evidence that will lead to his indictment for several crimes resulting from his actions yesterday, assuming Trump doesn’t pardon him. Should Trump grant Giuliani a pardon for universal pardon, there will be no protection from losing his license to practice law.

Giuliani also attempts to blame a non-existent organization for the violence, blaming the riot on imaginary members of Antifa. Anyone paying attention understand there is no national organization operating as Antifa. As the Washington D.C and Capital police work with the FBI and these January 6th thugs are arrested and charged it will become clear none of them belong to “Antifa.”

Antifa stands for anti-fascist, and our nation fought the Second World War to deposit fascism in the dustbin of history, not to enshrine fascist like President Trump and his lawyer Rudy Giuliani want as the form of our government.

After Giuliani and Eric Trump both whipped up the mob yesterday President Trump followed their call to arms. Within minutes of the President Trump’s call to his mob of domestic terrorists thousands of them marched down Pennsylvania Ave. and stormed the Capitol building.

Giuliani’s attempt today to deflect his insanity and criminality by comparing the assault on democracy he helped unleash to the summer racial justice protests that rocked cities across the country. Giuliani tweeted.….

“It was as criminal as the rioting and looting this summer which was not condemned strongly enough by the Left,”

A total croc of horse-manure, the violence we saw in the summer was fanned by police thuggery and inflamed by President Trump and his cancerous hatred of people of color. When it comes to white supremacists including the proud boys and the various NAZI and KKK type of groups, Trump has two words for them “stand by.”

Washington D.C. Police are reporting that they arrested pro-Trump 68 rioters — 60 men and eight women — who were arrested for storming the Capitol building. How many members of Antifa? ZERO, more arrests will follow and anyone taking part or encouraging the January 6, 2021 riot should be charged with any deaths of individuals, injuries, looting and assaults. They were all involved and must face the toughest public prosecution since the Nuremburg trials of the heinous NAZIS that survived the war.

Washington D.C. law enforcement assures the public that they will track down as many people as possible involved in the riot.