Giuliani Strikes Out in Pennsylvania: No Evidence of Fraud 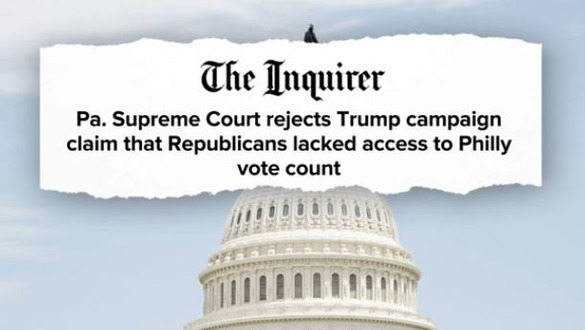 Pennsylvania's attorney general said that Rudy Giuliani's court performance on Tuesday which was Giuliani’s his first time arguing before a judge in almost 28 years was "sad to watch", as Donald Trump's desperate attempts to argue voter fraud appeared to reach a climax where Giuliani pounded the table in frustration.

Mark Aronchick, one of the defense lawyers, described Giuliani as living in a "fantasy world," called him "really inventive," and said he was making legal arguments that were "disgraceful in an American courtroom."

This morning, federal judge Matthew formally announced (PDF) the cancellation of an evidentiary hearing scheduled to take place on Thursday.

According to the judge’s order, “The evidentiary hearing previously scheduled for Thursday, November 19, 2020, is CANCELLED,” and at the same time also denied a motion by Trump attorney Linda Kerns to sanction opposing counsel for a supposedly “threatening” phone call.

“Judge Brann telegraphed this move in court on Tuesday when he said that he didn’t see the need to hold an evidentiary hearing based on the claims being made by the Trump campaign.”

“Context: Rudy Giuliani admitted in court yesterday, ‘This is not a fraud case,’” writes Klasfeld in explaining why the judge saw no need to hold a hearing on fraud evidence when Giuliani said that the case didn’t involve fraud allegations.

This reminds me of an old vaudeville routine with Abbott and Costello:

Abbott: I say Who's on first, What's on second, I Don't Know's on third.

Costello: Are you the manager? Abbott: Yes.

Costello: You gonna be the coach too?

Costello: And you don't know the fellows' names?

Abbott: Well, I should.

Costello: Well then, who's on first?

Costello: I mean the fellow's name.

Costello: The guy on first.