Gerrymandered Maps Slant Advantages to a Republican Majority in 2022 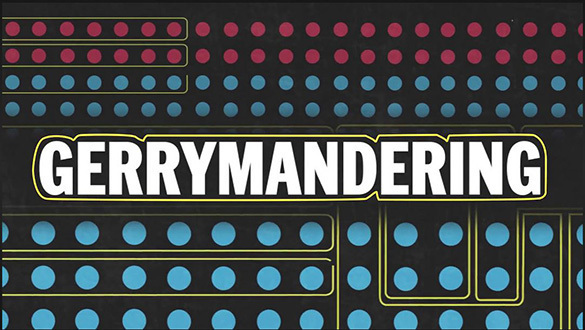 Based solely on the redistricting advantage that the party has gained on a highly skewed congressional map that is still taking form, the party has acquired enough safe House districts to seize complete control of the chamber.

Republicans are already poised to flip at least five seats in the closely divided House of Representatives a year before the polls open in the 2022 midterm elections, thanks to redrawn district maps that are more distorted, more disjointed, and more gerrymandered than any other maps drawn since the Voting Rights Act was passed in 1965, according to Republican strategists.

State lawmakers in many states are trying actively to consolidate their party domination, as seen by the swiftly growing congressional map, which has taken shape as districts are reconfigured this year and symbolize an even more radical warping of American political architecture.

The flood of gerrymandering, which has been carried out by both parties but primarily by Republicans, is expected to further polarize the nation by reducing the competitiveness of elections and making politicians more reliant on their party's base of supporters.

At the same time, Republicans' advantage in the redistricting process, combined with President Biden's and the Democratic Party's plummeting approval ratings, provides the party with what could be a nearly impossible advantage in the 2022 midterm elections and the House races of the following decade.

Republicans have gained an edge in seats in Iowa, North Carolina, Texas, and Montana. In contrast, Democrats have lost advantage in districts in North Carolina and Iowa, according to the results of the redistricting process in the 12 states that have finished it.

Considering everything, Republicans have gained a net of five seats that they can hope to keep, while Democrats have lost one.

Republicans only need to flip five Democratic-held seats in the House next year to gain control of the chamber.

Redistricting, which occurs every ten years, started late this summer after states got the long-awaited results of the 2020 census, which had been delayed for months.

The process will proceed state by state through the winter and spring, and it is expected to be finished by the primaries for next year's midterm elections.

Outside panels will draw the remainder. Depending on the situation, they will be in places where the two sides must agree on maps or have them adjudicated by the courts.

Gerrymandering may take various forms, but "cracking" and "packing." Both are methods of gerrymandering.  It is called cracking when mapmakers distribute a concentrated group of a certain kind of voters — for example, those connected with the opposition party — throughout many districts to dilute their vote.

Packing occurs when members of a particular demographic group, such as Black voters, or people from the opposite political party, are crowded into as few electoral districts as possible to increase their chances of winning.

The Republican gains in this election year add to a strong geographic edge for the party. Following the G.O.P.'s wave victory in 2010, statehouse Republicans significantly gerrymandered the existing congressional maps, quickly escalating the congressional map-drawing battles.

This year, both parties are beginning from a highly distorted map in a zero-sum political context, making for a fascinating political landscape.

They have been able to take a more surgical approach to the procedure due to developments in both voter data and software throughout time.

Republicans are wary of doing a premature victory lap if the country's political atmosphere evolves again over the next year, as happened in 2008.

Democrat leaders feel that although retaining control of the House will be a difficult task, they will be better positioned to do it in the Senate, where Vice President Kamala Harris is presently breaking a 50-50 tie.

The Republicans also say that if Mr. Biden's favor ratings continue in the dumps and voters mimic the performance of the Republican Party in the midterm elections this month; there might be a significant number of potentially competitive House seats.

Democrats accuse Republicans of being terrified of a close race in the next election with nothing to show for themselves.

Republicans, on the other hand, have significantly more opportunities to capitalize on their position.

Republican legislators in New Hampshire have suggested modifying a congressional map that has been unchanged since the 1800s to add a Republican seat.

In Georgia, Republicans want to consolidate the districts of Representatives Lucy McBath and Carolyn Bourdeaux, both Democrats who represent districts in Atlanta's expanding northern suburbs, into a single Democratic section while creating a new Republican seat.

Officials from both political parties are bracing for years of legal battles over the maps, with the possibility that courts would force the redrawing of maps far into the next decade if the situation continues.

Suits have already been brought in Oregon, Alabama, North Carolina, and Texas over the maps in question.

However, the legal environment has changed significantly since the previous redistricting cycle. In 2019, the Supreme Court determined that federal courts were not the proper forum for litigation involving partisan gerrymandering and other forms of political discrimination.

Meanwhile, lawsuits alleging racial gerrymandering in violation of the Voting Rights Act are still a possibility.

Since 2011, North Carolina has been ordered by the courts to redesign its congressional boundaries due to political gerrymandering on two separate occasions.

Nothing more than North Carolina, among the states that have produced their maps, exemplifies the Republican Party's concerted attempt to tip the political balance in their favor during redistricting.

Republicans in control of the North Carolina legislature, the only state to have its congressional maps completely redrawn twice since 2011 due to apparent partisan gerrymandering, approved highly gerrymandered districts this month, effectively returning the state to a map that was similar to the ones that the courts threw out.

Despite a nearly 50-50 split in the statewide popular vote for president in 2020, the G.O.P. has a significant lead in 10 of the state's 14 congressional districts.  Former President Donald J. Trump won the state by a margin of 1.3 percentage points over his opponent. The current congressional split is eight Republicans and five Democrats due to a court-ordered redrawing of the congressional map in preparation for the 2020 presidential election cycle.