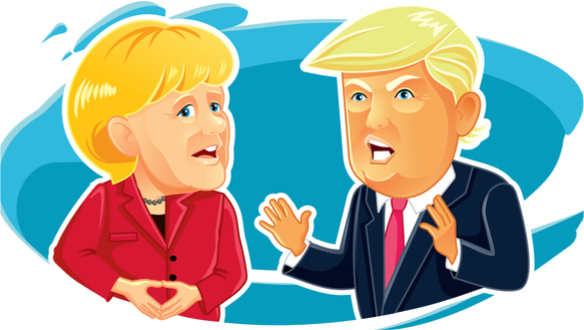 Chancellor Angela Merkel of Germany signaled at the Munich Security Conference she has no intention of being a slave to President Trump’s knee jerk foreign policy.

On Saturday Chancellor Angela Merkel speaking at the Munich Security Conference made it clear that our European allies will not succumb to American demands to pull out of the Iran nuclear deal.

In what may be her last speech at this yearly international security conference, Merkel gave a passionate speech, that made it clear that she believes the best way of influencing Iranian behavior on a range of non-nuclear issues, from missile development to terrorism is by staying in the historic nuclear agreement and remaining engaged.

Ms. Merkel went on to criticize other unilateral moves, President Trump without mentioning his name including withdrawing U.S. troops from of Syria, Afghanistan and the U.S. decision to suspend the Intermediate-Range Missile Treaty with Russia, which directly impacts European security. Her speech was met in the crowded auditorium with a standing ovation, while Ivanka Trump, as well as the Russian foreign minister and a high-ranking Chinese official, all pointedly remained seated.

Vice President spoke after Chancellor Merkel and despite her clear message made minutes before that she and Europe will not withdraw from the Iranian nuclear deal, Pence repeated the Trump administration’s demand in Warsaw that Germany, France, and Britain join Washington in pulling out of the Iran nuclear deal saying …

“The time has come for the Europeans to leave the Iranian nuclear deal,”

Vice President Pence speech has very little to do with multi-national cooperation and instead was a laundry list of list of demands the Trump Administration has for its European allies that focused on solely American interests with a focus on Iran as an evil regime...

“The Iranian regime openly advocates another Holocaust, and it seeks the means to achieve it.”

Chancellor Merkel lamented over the split over Iran by saying it “depresses me very much,” but she stressed that Europe and United States were ultimately pursuing the same goal and was also concerned about Iranian behavior saying…

“The only question that stands between us on this issue is, do we help our common cause, our common aim of containing the damaging or difficult development of Iran, by withdrawing from the one remaining agreement?

“Or do we help it more by keeping the small anchor we have in order maybe to exert pressure in other areas?”

Merkel strenuously defended multilateralism. She stressed that collective solutions were the only way to tackle global challenges — from a rising China to climate change to mutually beneficial trade.

The chancellor was especially pointed on the Trump administration’s decision to withdraw from Syria, asking…

“Is that not also strengthening the possibilities for Iran and Russia to exert influence there?”

Vice President Pence continued with President Trump’s accusations that the Nordstream 2 gas pipeline agreement between Russia and German, which bypasses Ukraine, and was giving Russia a possible tool to pressure the West…

“We can’t ensure the defense of the West if our allies are dependent on the East,”

Ms. Merkel said that Europe was buying Russian natural gas, regardless of the sources of delivery citing the fact that even during the Cold War…

“We imported large amounts of Russian gas. I don’t know why times should be so much worse today.”

“Do we want to make Russia only dependent on China? Is that our European interest?” she asked. “I don’t think so.”

“If that is viewed as a security threat by the United States…we are shocked.”

Declaring that BMW’s largest plant was now not in Bavaria but in South Carolina, Merkel added… “We are proud of our cars, and so we should be.

After both leaders had delivered their speeches, many said the difference in tone and reception by the audience was stark. Amanda Sloat, a scholar with the Brookings Institution in Washington and a former official in the Obama administration, was quoted as saying …