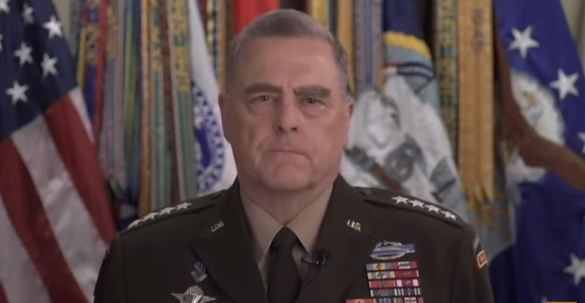 Deranged, disgraced, twice impeached former President Donald Trump denies he would stage a coup with the Chairman of the Joint Chiefs Mark Milley.

Every patriotic American committed to protecting our nation's Constitution, the rule of law, and our democracy must take a few minutes and consider carefully the statement released Thursday by Donald J. Trump denying a bombshell report that top military officer Mark Milley feared he was going to attempt a Nazi-style coup to stay in power.

According to a new book written by Pulitzer Prize-winning Washington Post reporters Carol Leonnig and Philip Rucker entitled "I Alone Can Fix It," scheduled to be released next Tuesday. Milley spoke to friends, lawmakers and colleagues about the threat of a coup, and the Joint Chiefs chairman felt he had to be "on guard" for what might come.

The book chronicles Trump's final year as president, with a behind-the-scenes look at how senior administration officials and Trump's inner circle navigated his increasingly unhinged behavior after losing the 2020 election. The authors interviewed Trump for more than two hours. The book quotes Miley as saying regarding Trump's possible coup attempt …

Trump wrote in the statement…

"Despite massive Voter Fraud and Irregularities during the 2020 Presidential Election Scam, that we are now seeing play out in very big and important States, I never threatened, or spoke about, to anyone, a coup of our Government. So ridiculous!"

"Sorry to inform you, but an Election is my form of 'coup,' and if I was going to do a coup, one of the last people I would want to do it with is General Mark Milley."

Yikes! Trump's assertion… "If I was going to do a coup," he would involve the highly decorated general, implying if he did attempt a coup, he would rely on other military personnel.

Trump's consistency of disparaging, insulting, and attacking those who step forward and call him out as a mentally deranged threat to our country's democracy went on to claim that he only hired Milley because former Defense Secretary James Mattis "could not stand him" and because President Barack Obama had fired him.

So, Trump admits he didn't pick the most qualified and best General office to be the Chairman of the Joint Chiefs of Staff; his decision was based on his vindictiveness towards former President Obama and Defense Secretary James Mattis.

This insane claim deserves some deep consideration by every American. The criteria of selection, according to Trump, have nothing to do with picking the best person to protect and defend the Constitution. His choice, according to Trump, was based entirely based on his petty grievances.

Trump went on to write in his statement…

"I often act counter to people's advice who I don't respect.  In any event, I lost respect for Milley when we walked together to St. John's Church (which was still smoldering from a Radical Left fire set the day before), side by side, a walk that has now been proven to be totally appropriate — and the following day Milley choked like a dog in front of the Fake News when they told him they thought he should not have been walking with the President, which turned out to be incorrect. He apologized profusely, making it a big story, instead of saying I am proud to walk with and protect the President of the United States. Had he said that, it would have been all over, no big deal, but I saw at that moment he had no courage or skill, certainly not the type of person I would be talking 'coup' with. I'm not into coups!"

The protesters in Lafayette Park were peaceful and included members of the press from all over the world who were tear-gassed and physically assaulted by the park police and members of the National Guard.

Despite what Trump thinks…General Milley United States and military members are not responsible for protecting the President on U.S. territory. They are not supposed to be involved in political staging, which was the entire purpose of the photo opportunity he staged at St. John's Church.

Trump faces the prospect of having General Milley and former Defense Secretary Mattis campaigning against him and the Republicans during both the 2022 and 2024 election cycles.