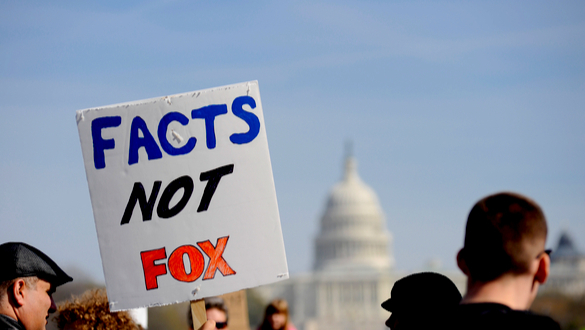 FOX Business News allows moronic white supremacist, Lou Dobbs to call GOP senators opposing Trump’s tariffs ‘traitors’ to their country. By doing so, he and FOX are demanding their executions as well as any critics of Trump’s policy. He’s demanding the end of free-speech!

I’m not going to pull any punches. Lou Dobbs is a white supremacist moronic fart who is urging my arrest and conviction for treason simply because I believe Trump’s threat to impose tariffs on Mexican imports are illegal. A tax on American consumers and manufacturers that could cost 400,000 jobs in the United States at 5%, and as many as 2 million jobs if Trump makes good on his threat to raise the tariffs to 25%.

The Lou Dobbs propaganda is pure Joseph Goebbels and is the sort of fascist rhetoric, and propaganda FOX News and business networks are willingly and intentionally promoting. Dobbs is joined in this sick propaganda by Sean Hannity, Laura Ingraham, Tucker Carlson, and many others on FOX News.

FOX and the Murdoch mafia is and has been allowing our 1st Amendment protection of free speech to be used by sycophant Trump white supremacists including many Trump sycophantic supporters who regularly spew and justify Trump’s lies.

President Trump is not above the law. Although he is acting that way across the board and in the process, moving our country to a despotic authoritarian Kleptocracy that will be even more corrupt and murderous than that which exists in Russia or North Korea.

Every American who watches these two FOX networks is aiding and abetting the murder of our Republic and its democratic values. It’s time for a boycott of FOX business and news networks.

It’s time for Brett Bear, Chris Wallace, and Sheppard Smith­ – all multi-millionaires – to walk off their live shows, along with any others of the principal who are willing to stand up to this NAZISM.

Helsinki should have been enough to demonstrate the traitor is, in fact, President Trump. The Mueller report reinforced that Russia hacked our 2016 election to arrange his election victory and has convinced over 1000 former federal prosecutors including many retired judges that President Trump is guilty of obstruction of justice.

Lou Dobbs, Laura Ingraham, Sean Hannity, Tucker Carlson, and many others on these FOX business and news shows are white nationalists and are promoting and rallying policies that will kill the U.S. Constitution.

To survive in America, a hundred million black, non-white Hispanics, Asians, Muslims, and freedom-loving Caucasians, etc. in this country must be willing to stand up and prevent what happened in Germany from 1933 through 1944.

I for one would rather clearly state to Lou Dobbs and these white supremacists’ buddies at FOX news and business that I will do nothing short of the fight to the death for me and my children’s liberty and freedom. First at the ballot box and if needed, as part of an underground to topple any despotic authoritarian Kleptocracy that may arise as the result of a fixed election by foreign powers in league with the “very stable genius” in the White House

I am a nonviolent conscientious objector who realizes my relatives in Poland were murdered because they weren’t willing to fight back. They couldn’t imagine the horrors of the Polish Ghetto or the concentration death camps filled with the smell of rotting and burning bodies. They were marched off to their deaths, starved and tortured. I will not allow that to happen to me, my family, or any person in this country.

I will pray every day for the deaths of those in this evil FOX cabal, including those GOP lawmakers and pundits who are openly calling GOP Senators and me traitors and thereby demanding our deaths as traitors.

I am not a traitor for knowing both before and after that President Trump election that he is capable of crimes against humanity and is committing them daily.

Trump’s arming of Saudi Arabia is committing genocide daily in Yemen. Trump’s imprisoning and murdering children in makeshift concentration camps every day will lead to torturing and hanging children. The Trump administration has announced it intends to cut services and care for the tens of thousands of unaccompanied children living in deplorable concentration camp conditions.

This morning, during a CNN interview, one of Trump’s economic advisors Peter Navarro openly claimed that the vast amount of immigrants are black and non-white Hispanics and on the low end of the economic spectrum, a trope used by Hitler, Goebbels and white supremacists around the world to justify a NAZI-like final solution.

I suspect more than a hundred million Americans will not tolerate a descent into a despotic authoritarian Kleptocracy with death and re-education camps. As Patrick Henry asserted facing his death by hanging by the British crown, “Give me liberty or give me death.”

Forces of freedom, religious tolerance, and democracy if you’re listening, the point of no return approaches as Donald J. Trump and his sycophants will aid and abet both North Korea and Russian in attacking the United States on Election Day 2020 with their considerably powerful cyberwar weapons that will change the outcome and guarantee Trump’s re-election. This will ignite a civil war, the end of this great union. It is happening and will happen in front of our eyes if we stand by and allow it to continue.

Yes, Lou Dobbs, every GOP senator including Senator Lindsey Graham and Senator Mitch McConnell who stand by and let our enemies use President Trump to subvert our government will deserve the label of a traitor and deserve a trial that may end with their executions or lives wasting away in a Spandau-like prison.

However, those GOP lawmakers who stand up against this evil will enjoy the same label that those who resist as patriots and heroes.

The time has come to choose where you want to be in history. Boycott the FOX news and business networks. The Murdoch mafia no longer owns the sports and entertainment divisions. Spend nothing with FOX advertisers that support the traitors calling you and I traitors for exercising our 1st Amendment rights. Speak out and pray that God intercedes and prevents the end of the United States.