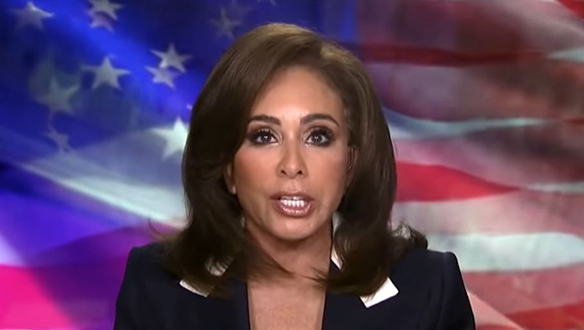 Notorious far-right-wing hate-spewing Fox News talking head Judge Jeanine Pirro Arranged Payments for January 6 Insurrection' command centers,' which may lead to her and President Trump being indicted and convicted of a slew of charges.

No Fox News former Judge Jeanine Pirro isn't making news for being arrested for drunk driving; again. Although she may want to claim she was drunk and not in her right mind now that it appears she's is in a whole lot more trouble. Trouble could lead to her indictment for committing serious felonies related to her involvement on January 6, 2021, Capitol insurrection.

The Washington Post is reporting that she appears to have orchestrated campaign payments to cover the costs of 'command centers' at Washington DC hotels for the sole purpose of staging the attempted coup on January 6, 2021, to overthrow the duly elected government planned by President Trump and his sycophants.

The Washington Post story could make it impossible for Donald Trump to successfully claim executive privilege completely mute. This comes just after a day that former President Donald Trump lawyers filed a legal brief that falsely claims FBI and Senate investigators have cleared his administration of wrongdoing concerning the January 6 insurrection.

The new revelations about Jeanine Pirro's being part of the effort to help right-wing groups that took part in the January 6 attempt to stop the electoral process and capture Democratic lawmakers like Speaker Pelosi and Vice President Pence to hold them, hostage, putting them on trial and executing them are explosive.

"Former New York City mayor Rudy Giuliani and the city's former police chief Bernie Kerik had been paying for hotel rooms and travel related to their efforts to overturn Trump's election loss, but the pair grew concerned by early December as the bills piled up."

Bernie Kerik openly admitted to the Post that he wondered…

"How do I know I'm gonna get my money back?"

"Kerik knew that Giuliani hadn't been reimbursed for his expenses or paid for his services, but their friend Jeanine Pirro, a Fox News host beloved by the twice-impeached one-term president, called Republican National Committee chairwoman Ronna McDaniel and asked her to help them out."

"McDaniel spoke to Kerik by phone but refused to give him money, and instead recommended that he ask the Trump campaign to reimburse his expenses, according to the former police chief and a GOP official."

According to the in-depth research conducted by the Post…

"The campaign cut its first check to Kerik in mid-December with Trump's approval, according to a former senior campaign official, and eventually paid more than $225,000 for hotel rooms and suites at the Willard Hotel in Washington, D.C., that served as a "command center" for efforts to overturn the election results ahead of January 6 riots."

Legal experts from both sides of the legal divide caution that these payments arranged by Pirro could severely impair Trump's attempt to claim executive privilege over documents and testimony related to the U.S. Capitol riots sought by the House select committee investigating the insurrection.

Richard Ben-Veniste, a former Watergate prosecutor, was quoted by the Washington Post as saying…

"[This] further undermines a wildly broad assertion of executive privilege… Executive privilege is typically limited to the protection of communications involving a president's official duties — not to those relating to personal or political campaign matters."

Former Justice Department official John Yoo confirms Ben-Veniste assessment that the payments could upend Trump's defense. Yoo is a former advisor of vice president Mike Pence's staff who insisted that there was no legal basis to deny the certification of Joe Biden's election win, agreed Yoo was quoted by the Post as saying…

"If he acts like a president, he gets these things we talk about — executive privilege and immunity. But if he's acting like a candidate, he's deprived of all of those protections."