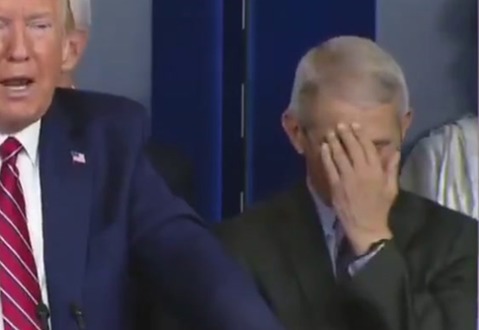 Fox News should be known as Fox Propaganda Network putting a target on Dr. Anthony Fauci’s back.  Fauci and his family need a 24 hour comprehensive Secret Service protection assigned immediately.

It’s a shameless, blatant, corrupt and mendacious attack on both on the truth and medical science.

As Senator Joseph McCarthy of the 1950s, the Fox Propaganda Network is a well-practiced expert in smearing people. Their target is now Dr. Anthony Fauci, who has been the head of the National Institute of Allergy and Infectious Diseases since 1984. He’s served six consecutive Presidents since Ronald Reagan.

Trump and his Kakistocracy want to lie about the number of people that have died from COVID-19. The reality that as many as 350,000 will die by Election Day 2020 has our President shitting his pants, and his son in law talking about suspending the November election.

Trump has concluded as long as twice as many people believe Dr. Fauci than believe him, he has to tear Fauci down.   This is the same political FOX Propaganda Network machine that went after Obama with birtherism, Clinton on the nonexistent emails and in its nonstop attacks on Special Prosecutor Mueller.  Now the Tokyo Rose network is out to discredit Dr. Fauci.

A recent poll show 66% of the public believe Dr. Fauci, while just 37% trust what Trump has to say about the pandemic. Not a problem; after all, Secretary of State, Clinton had a 60%+ approval rating before she was painted as being responsible for the Benghazi massacre.

The far-right need a miracle not to lose the Senate and White House, and the Fox machine may just be gearing up for their propaganda scheme. They’re going to try to make it happen by getting rid of the science, and that regretfully translates that Dr. Fauci has to be destroyed.

The problem with inciting a negative publicity campaign,  you never can tell how extensive the collateral damage will be.

There are a good million men out in this country that is white supremacists, Nazi flag wavers that own guns and have an IQ barely 90 who watch the Fox Propaganda Network.  It just takes one that gets so worked up by one of FOX’s Tokyo Roses programs. It’s time for round the clock the United States Secret Service protection for Dr. Fauci and his family now.

No matter how hard Trump and Fox Propaganda spin, the fact is as many as 350,000 people may die by Election Day because of this sociopathic President’s incompetence and narcissism.

Getting rid of Fauci could backfire big time. He’s not a shrinking violet. He’s a truth-teller. Truth-tellers tend to be very stubborn.