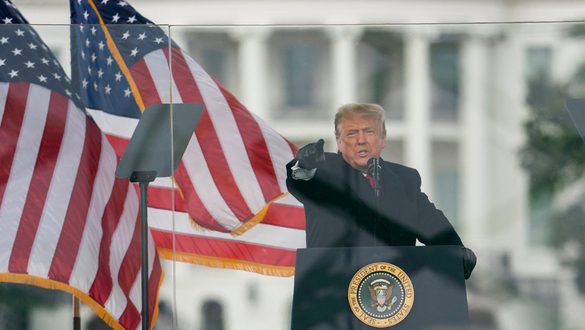 While Fox News Tucker Carlson beat down Senator Ted Cruz, Brian Kilmeade, co-host of Fox & Friends, pleaded with his viewers last Friday to accept that Biden had won and called out Donald Trump for his great lie. A US Department of Justice official explains why the Jan. 6 incident is examined as domestic terrorism.

It's becoming more transparent and clear in the aftermath of Attorney General Merrit Garland's speech last week that the DOJ is looking to prosecute those who took part, planned it, and facilitated the January 6, 2021 insurrection at all levels. On Tuesday, Assistant  Attorney General Matt Olsen testified before the Senate Judiciary Committee. He explained why the January 6 attack on the U.S. Capitol is being investigated as an act of terrorism. During questioning by Sen. Mazie Hirono (D-HI) after Olsen revealed that the DOJ is forming a new domestic terrorism unit, the Senator bluntly asked…

"Is what happened on Jan. 6 domestic terrorism?"

"The Department of Justice and FBI has been clear that the attacks — the events — that occurred on Jan. 6 are being investigated as an act of domestic terrorism,"

"And you quoted from the federal code definition of domestic terrorism, which, if I may, involves 'acts dangerous to human life, that are a violation of criminal laws,' and, in part, that are intended to 'influence the policy of government through intimidation or coercion."

"So I think it's entirely appropriate that Jan. 6 events are generally being investigated as acts of domestic terrorism… it's important to add that in any particular case, it will depend on the actual facts and circumstances of that case, which of course are ongoing in the investigation and prosecution stages."

This testimony should send shivers down the backs of Steve Bannon, Peter Navarro, Mark Meadows, former President Trump, and all of his congressional and legal minions involved in planning to halt the electoral count on January 6, 2020. It means that the Department of Justice may be shifting to charging those involved with domestic terrorism, charges that could lead to prison sentences of 20 years to life. This is a significant shift in that people charged with the much serious crimes of domestic terrorism are likely to spill their guts on everyone they can in hopes of mitigating their prison sentences.

Fox has to be concerned that this shift in DOJ's approach to prosecutions would help solidify the damages claimed by Dominion Voting Systems and Smartmatic suing Fox and others for slander, defamation and injurious business damages. It could also fortify the civil suit filed by Georgia poll workers and put all the defendants and Donald J.Trump.