The “Replacement Theory” propaganda being spread by the likes of FOX’s resident racist Tucker Carlson can be summed up as the belief that America’s white Christian population is being systematically being replaced by Blacks, Hispanics, Asians, Jews, Muslims, Sikhs, Buddhists and hordes of foreigners from “shit-hole” countries. 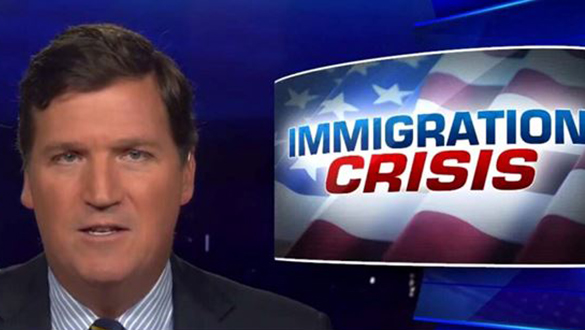 It’s not a newly designed form of hatred. It’s the same hate we saw rise throughout European and U.S. history and lead to the birth of the German Nazi regime that led to World War II, 75 million dead, and some of the worst atrocities in human history.

With the blessing of the Murdoch Fox News Empire, Tucker Carlson is peddling non-stop the Nazi “replacement theory.” A doctrine of hatred of nonwhite Christians in the United States that is built on the belief that the Democratic Party’s central goal is to import tens of millions of Blacks, Hispanics, Asians, Jews, Muslims, Sikhs, Buddhists and hordes of foreigners from “shit-hole” countries so they can seize power in this country and disenfranchise white people via the democratic process.

Tucker Carlson is no different than the Nazis, KKK members, and a dozen or so White Supremacist groups who had members marching with torches and chanting racist slogans like “blood and soil,” “White Lives Matter,” and “Jews will not replace us.” These hatred words were spoken during the night of August 11, 2017, the day before the “Unite the Right” rally in Charlottesville, Virginia, that ended with a young neo-Nazi plowing a car into a crowd of counter-demonstrators, killing one of them.

In recent weeks following January 6, 2021, Washington insurrection Tucker Carlson has dialed up his white supremacist rhetoric. For example, he said during a recent episode…

“The left and all the little gatekeepers on Twitter become literally hysterical if you use the term replacement — if you suggest that the Democratic Party is trying to replace the current electorate, the voters now casting ballots, with new people, more obedient voters from the Third World. They become hysterical because that’s, that’s what’s happening actually.”

Likening immigrants to newly adopted children favored over their biological siblings. He went on to assert…

“You would say to your siblings, you know, I think we’re being replaced by kids that our parents love more.”

Is this white supremacist rhetoric dangerous? Political scientist Robert A. Pape recently found that fear of white people losing out was a dominant motivating factor for those who rioted at the Capitol on January 6, 2021.

“Replacement theory has a long history — from the 1890s to the 1920s, nativists argued that inferior Eastern and Southern European peoples (many of them Catholics and Jews) were replacing the dominant population of Northern European Protestants.

“The 1916 tome “The Passing of the Great Race: Or, The Racial Basis of European History” by eugenicist Madison Grant and the 1920 volume “The Rising Tide of Color Against White World-Supremacy” by historian and white supremacist Lothrop Stoddard fueled this paranoia, which has been echoed, in our own times, by such media figures as Patrick J. Buchanan, Peter Brimelow and another (Fox News propagandist) Laura Ingraham.”

With the approval of the Murdoch’s, Tucker Carlson is inching closer to advocating for the end of the Democracy in the United States. A return to the United States when only wealthy white landowners were allowed to vote.

Carlson’s goal is no different than Josef Goebbel’s. Like Goebbels, Tucker uses replacement theory to scare white people rather than help them organize for decent healthcare and education, stronger labor protections, a more robust safety net and a sustainable planet.

Indeed, Carlson is a charlatan — born in San Francisco and raised in La Jolla to an upper-middle-class family. He has never used any of his perches on TV to actually help disadvantaged people of any race. Following in Josef Goebbel’s footsteps, he prefers to stoke his audience’s fears, suspicions and resentments.