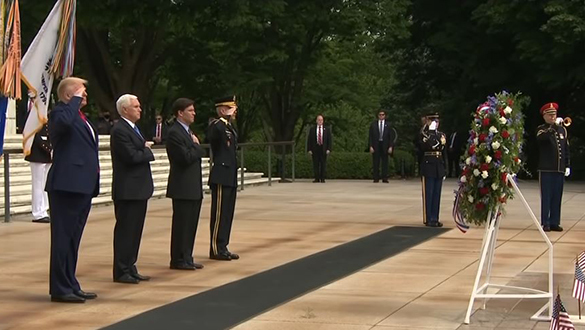 Love him or hate him, Fox legal analyst Judge Andrew Napolitano has earned a reputation for telling the truth and being honest with his opinions. Something you can’t get away with at Fox News in the age of Trumpism. Yet, it seems the threat of losing his job at Fox News hasn’t stopped him from expressing his beliefs and offering an uncomplimentary analysis of President Trump when he sees it as being necessary.

Judge Andrew Napolitano writes in a Fox News Op-ed that he was appalled at the revelations inside a report from The Atlantic that said President Trump disparaged U.S. service members and war dead. Napolitano says he wasn’t surprised; he’s been a friend of Trump’s since 1987. Napolitano wrote…

“To be Trump’s friend does not immunize one from Trump’s wrath.”

“On the contrary, he expects total loyalty, particularly from those in the media, and he will not hesitate to attack his friends publicly should he hear anything from them that displeases him.”

Napolitano shows the integrity and honesty to admit that while he’s loyal to his friends, he’s first and foremost loyal to the truth and according to him, it “appears more likely than not” that Trump did indeed slander American military service members. Napolitano went on to write....

“I say this because — for better or worse — Donald Trump is unfiltered… He often says what first comes to his mind without thinking of the likely consequences — including the hurt — his words could produce. And he believes he can repair any hurt with more words.”

Napolitano also offered in his op-ed....

“In all the settings in which it is now alleged that he disparaged the military dead, only one person was continuously and conspicuously with him, Gen. John Kelly. Kelly is a retired four-star Marine Corps general and the father of a young Marine killed while serving valiantly in Afghanistan. Trump is also alleged to have disparaged the younger Kelly in the presence of his still-grieving father.”

“The elder Kelly -- who was the White House chief of staff when Trump’s “losers” and “suckers” comments and similar comments are alleged to have been made -- is the quintessential career soldier.”

“But his silence is deafening. He either heard these horrible words from Trump’s mouth or he didn’t. You can judge for yourself what his silence means. To me, it means he did hear this stuff, but his Marine Corps sense of duty not to disparage the commander in chief who trusted him outweighs his public duty to reveal known faults in the president’s thinking.”