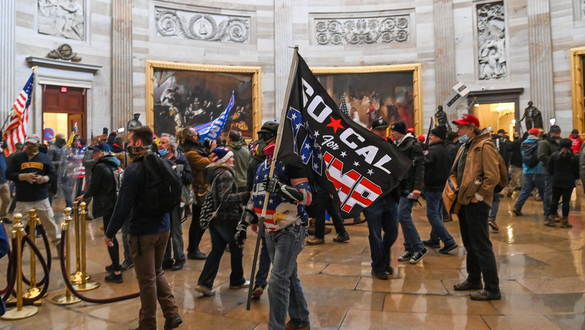 Chris Krebs, Trump’s former chief of U.S. cybersecurity: there will be more bloodshed caused by Trump in the run-up to President-elect Joe Biden’s inauguration on January 20.

The former Trump chief of U.S. cybersecurity, Chris Krebs, told CNN’s Don Lemon last night that in days leading up to January 6, 2021’s “Save America” rally he had no questions in his mind that violence would erupt.

Krebs’s worst fears were realized when the pro-Trump rally goers turned into a mob of sedition rioters and domestic terrorists after the president and his allies incited them. The traitorous mob’s resulting scene stormed the U.S. Capitol, creating a full-fledged insurrection that shocked the world.

“There’s going to be more violence. There is going to be violence in the run-up to the inauguration. This is not over. There will be more. Various individuals can take some steps, and I hate using the passive voice there, so I’m just going to call it out. The president has to declare that this was a free and fair election. He lost. He still has time to do what’s right. It has to happen. There will be more bloodshed.”

Krebs, a lifelong Republican, was fired by Trump for telling the truth that there was no widespread fraud during the 2020 election. Krebs was appointed to lead the Cybersecurity and Infrastructure Security Agency in 2018. Like many before him was fired from his job by POTUS45 via tweet in November. Punishment for his agency is coming out publicly for debunking the president’s repeated bogus claims of election fraud in the aftermath of his election loss.

The riotous chaos pained Krebs; the scenes that were caught by hundreds of cameras in Washington D.C. on Wednesday, insisting to Don Lemon it was “not an America that I recognize.” Krebs said and asked…

“Call it what it is; this is an insurrection.”

“What kind of example? Will, it set to other countries seeking to escape dictatorships?” 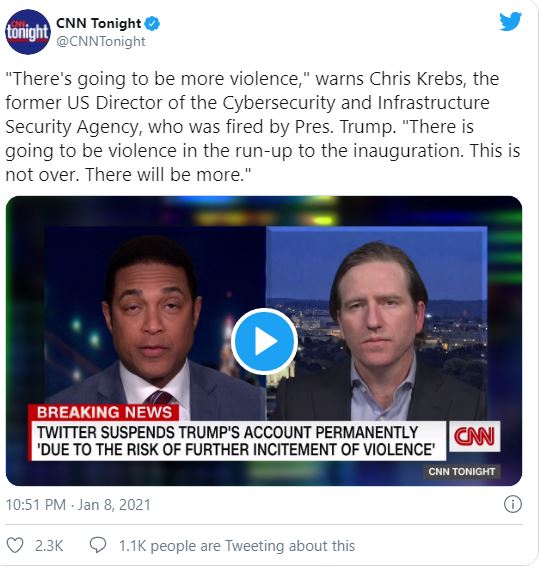 The warning from Chris Krebs has been echoed by a scholar of authoritarians Ruth Ben-Ghiat is a history professor at New York University and author of the book “Strongmen: Mussolini to the Present” who was quoted by Huffington Post saying about President Trump…

“He’s going to be more unleashed and unhinged than ever.”

Ruth Ben-Ghiat went on to say this historic insurrection was the culmination of five years of fascist rhetoric from President Donald J. Trump, who now just 11 days left in his disastrous one term in the White House.

Professor Ben Ghiat told HuffPost during her interview with the news organization that she thinks Trump might act once he’s out of the office and how America could be headed for even more violence and political unrest. The most worrying thing about the insurrection on January 6, 2021, is that it may be the beginning of the MAGA insurrection and how the end of Trump’s presidency might be the beginning of a phase of extremist violence that won’t go away for many years.

When asked by Huffington Post if the MAGA terrorist “movement represents a real authoritarian or fascist insurgency and if she was still surprised to see what took place on Wednesday?

“No, I wasn’t surprised. I was extremely calm when it happened because I just kind of expected it. Of course, it was shocking to see then the lawmakers cowering, and then I became very angry at the arrogance and lawlessness, and the fact that the police didn’t do anything and that these guys went out for drinks later, these insurgents. But no, this has been set up since Trump’s presidential campaign, when he actively cultivated all of these various militias and far-right forces, so it’s that cultivation entwined with this victim cult.”

“Because this doesn’t work if you don’t have the cult leader. And the leader is the victim. So the leader is the protector, he’s going to save the nation, blah, blah, blah, but once they bonded to him, it’s very fascistic. It’s very fascist. If he’s in trouble, their duty is to save him. And so Trump has played them like a violin all these years, doing exactly what he needs to do to string them along and keep them loyal. Give them just enough crumbs of affirmation.”

“And then he called on them because the other things that he was trying to do didn’t work.”

Then Huffington Post asked the professor if this kind of leader-follower relationship is like a fascistic relationship. And how is that spell broken? How do people get out of that relationship?

“Unfortunately, they don’t get out of that. What I mean is — the other cases are, in some ways, not analogous, because, you know, when you have a real dictatorship, there’s no opposing voice. In fact, in a way, it makes our case all the more scary and remarkable because he didn’t have time to ruin democracy.”

“You know, we had a very robust opposition press. But yet he still managed to have this huge mass of fanatically loyal people. And so once they bond with a leader, historically, the only thing that gets people out of it is direct experience with disaster. So it’s very Interesting that the coronavirus didn’t, you know, cause more people to turn away from Trump. And again, he’s very skillful at propaganda, so he knew how to present it all so that, you know, he wasn’t touched — the mismanagement wasn’t blamed on him.”

“But some people did, some people woke up and made videos, saying, “I used to believe Trump and my wife died,” you know, so that’s the kind of thing that needs to happen at a mass level. And it’s been horrifying that it hasn’t happened. Indeed he got more votes.”

“In Italy and Germany — and again, you had many, many years of total dictatorship — but the only thing that ruined or started to dissipate the personality cult was when the Allies bombed Italy and Germany, and regular people had immense hardship. And in that sense, what’s parallel is the shock of people seeing the Capitol, you know, breached, and lawmakers have to run for cover. That shocked some Trumplicans into resigning like it woke some people up.”