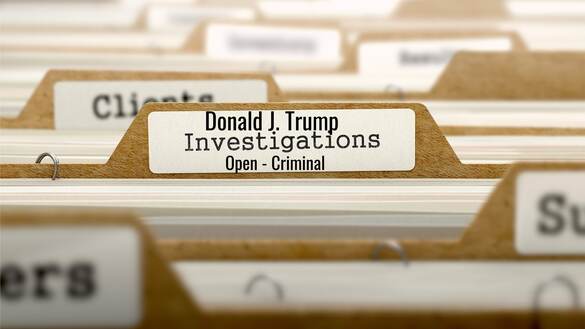 Donald J. Trump is intensely worried about the criminal investigations in Manhattan, NY, Fulton Country, GA, and the potential of his being criminally indicted in Washington D.C. for several crimes tied to his attempted illegal efforts to overturn the 2020 election.

At his "Save America" event in Conroe, Texas, on Saturday, the former president warned of what will be "the largest protest we have ever seen" in the United States. Should the House Special House Committee members and or prosecutors "do anything illegal" in their investigations into him and his business. In that case, he expects mass protests in the millions to erupt across the country.

In other words, if he, his business, his three oldest children, a long list of his sycophants, cronies, and supporters are indicted by state and or federal law enforcement for committing crimes ranging from Tax Fraud, Bank Fraud, Insurance Fraud, Conspiracy to Commit Sedition, Assaulting Police Officers, Destroying Public Property, Mail and Wire Fraud, etc. ...Trump expects one giant and continuous January 6 insurrection throughout the United States.

Trump said during the speech…

"If these radical, vicious racist prosecutors do anything wrong or illegal, I hope we are going to have in this country the biggest protest we have ever had ... in Washington, D.C, in New York, in Atlanta and elsewhere because our country and our elections are corrupt,"

Given the fact that he claimed I could "shoot somebody, and I wouldn't lose any voters"… and his refusal even after more than 64 court decisions and his own cybersecurity expert saying the 2020 election was the most secure one in history and his Attorney General said no widespread election took place. He will consider any indictment(s) illegal.

Trump also accused New York Attorney General Letitia James (D) of launching a political attack against him. In a court filing last week, James claimed that her office discovered evidence of Trump's company using "fraudulent or misleading" valuations of its golf clubs, skyscrapers, and other property to secure loans and tax benefits. She also pointed out that all Trump's accusations have come long after her investigation began. His lawyers have gone almost two years without making any such claims.

Trump's mention of Atlanta refers to the investigation led by Fulton County District Attorney Fani Willis into whether Trump and others acted criminally when trying to pressure Georgia officials into overturning President Biden's win in the 2020 election. Trump, Senator Lindsey Graham, Mark Meadow, Rudy Giuliani, and others attempted to illegally count votes and submit fraudulent elector paperwork to Congress and the National Archives via the U.S. Mail.

Trump also sounded more like the 20 Century Dictator Benito Bussolini at the rally by saying that if he ran for reelection and won, he would pardon all of the January 6 rioters because he believes they have been mistreated. Including the ones that physically assaulted police officers…

"If I run and I win, we will treat those people from January 6 fairly," Trump told the crowd. "We will treat them fairly, and if it requires pardons, we will give them pardons because they are being treated so unfairly."

The response to Trump's fascist rhetoric prompted Sen. Lindsey Graham (R-SC) during his appearance on CBS's "Face The Nation" on Sunday to admit to hosting Margaret Brennan that he thought Trump's remarks were "inappropriate." Graham told Brennan of the Capitol attack…

"I think it's inappropriate. ... I don't want to do anything that would make this more likely in the future,"

"At a Texas rally, Donald Trump talked of a comeback. His list included talk of pardoning those convicted of attacking the Capitol and the country on January 6 last year. Then last night, Trump issued a statement the Jan. 6th committee will take as a confession; the former president says it is unfortunate that Mike Pence didn't overturn the 2020 election."

King pointed out that Haberman had…

"You tweeted last night that Trump was saying the quiet out loud when he issued this statement,"

"But what did that tell you about Donald Trump's mindset and thinking of this juncture?"

"He's in, John… burn it all down mode and has been for some time."

"It raises questions for me, candidly, about the vetting process around these statements going out because that was a jarring statement, I think not just for the Jan. 6th committee, but probably for lawyers involved in the civil suits against Donald Trump related to the riot of the Capitol on January 6."

Meanwhile, a Forbes report states that Donald Trump's wealth seems to have vanished. He has only $93 million in cash, citing a 2020 disclosure. This is far less than he has claimed at other times and maybe why his wife is selling her clothes and his private jet is sitting unrepaired and unable to fly. According to Forbes, the valuation was based on documents released last week by New York Attorney General Letitia James as part of a civil investigation into possible fraud schemes at the Trump Organization.

According to Forbes, his cash on hand compares to previous, larger claims Trump has made about how much money he has — notably in a 2015 interview. He claimed to have $793 million in cash. He was, of course, not under oath and is notorious for lying about his wealth. Trump's precise wealth has long been difficult to pin down, given his reluctance to release independent evidence.

Suspicion over Trump's weak financial position has been swirling since the news of the National Republican Committee's disclosure that it will cover $1.3 million of his legal expenses that have nothing to do with his presidency.