Former French President Sent To Jail: Trump Could Be Next 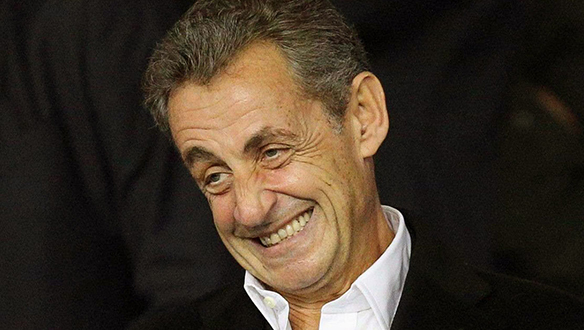 Former French President Nicolas Sarkozy was found guilty of corruption and influence-peddling this morning in a Paris court and he has been sentenced to a year in prison.

The sign that western liberal democracies will survive the challenges of would-be autocratic, authoritarian dictatorships is to make sure no one is above the law. The U.S. Senate’s vote not to hold former President Trump culpable and responsible for the January 6th insurrection has literally endangered the existence of our Republic and democracy.

Former French President Nicolas Sarkozy 66, and was the President of France from 2007-2012. Sarkozy was convicted for trying to bribe a magistrate in exchange for information about a legal case in which he was implicated. While he can both ask to serve his time under house arrest and or appeal the verdict. The French have proven, regardless of the end result, that no one is above the law in France.

Sarkozy will remain free while he appeals the court’s verdict. Like former U.S. President Donald   Trump, Sarkozy, despite being retired, exercises a great deal of influence in French conservative politics.  His power has been crippled by this verdict and because he still faces another trial that will start later this month in an entirely different case. If Sarkozy’s conviction on the corruption charge stands, he will also be subject to two-year additional suspended sentences that he would have to serve if he commits another crime in the next five years. Given he’s already facing another trial, Sarkozy could see his freedom stripped from him entirely with another guilty verdict.

The conviction is the first time in modern times that a former president of France has been convicted of corruption and sentenced to prison. His predecessor, Jacques Chirac, was found guilty in 2011 of misuse of public monies while he was the mayor of Paris – which wasn’t considered a corruption offense and served a two-year suspended prison sentence. One can only imagine how long Donald Trump might spend in jail if he was found guilty for income tax fraud, insurance fraud, money laundering, and attempting to extort election officials to illegally alter the results of an election.

In what amounts to a nightmare for the former French President, his co-defendants, including his lawyer and longtime friend Thierry Herzog, 65, and now retired magistrate Gilbert Azibert 74, were also found guilty and given the same sentence as the former French President. The French court in which the trial took place found that Sarkozy and his co-defendants sealed a “pact of corruption” based on severe and consistent evidence.”

The French court, in its decision, pointed out the case was “particularly serious” because it was committed by a former French President for his personal gain. As one of the particular prosecutors pointed out, Sarkozy was “perfectly aware” that what he was doing was 100% illegal.

The prosecution focused on phone conversations that took place in February 2014. During the investigation, these secret phone calls were made via private mobile phones registered to alias “Paul Bismuth.”

The calls were wiretapped and led the prosecutors to suspect former French President Sarkozy and Herzog promised Azibert a job in Monaco to leash the information in another legal case Sarkozy was obsessed with. In one of the calls made between Sarkozy, Herzog and Azibert, the former French President told the magistrate that “I’ll make him move up…I’ll help him.”

In another phone call, Herzog reminded Sarkozy to “say the word for Azibert during a Monaco trip. Azibert never got the Monaco job and the legal proceedings that Sarkozy was in a panic over ended up being dropped. Yet, prosecutors concluded that even though the case was never brought to court Sarkozy “clearly stated a promise,” and that was a bribe and corruption under French Law, even if the bribe was not fulfilled.

There are many revelations in this prosecution of the former President of France that resemble what Donald J. Trump will face as prosecutors in N.Y. State, Manhattan, DeKalb County, Georgia and Washington D.C, to name just a few places former President Trump could find himself indicted and facing trial.