Florida Continues to be the Hub of the U.S. Delta Virus 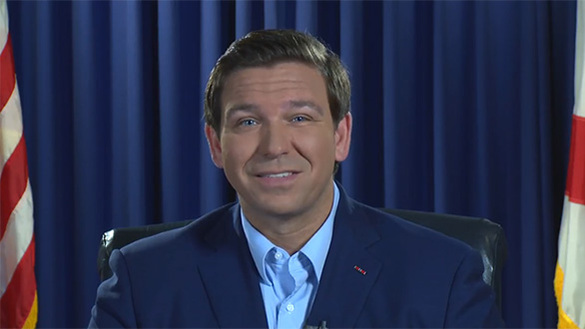 Florida Governor Ron DeSantis has blamed just about everyone except himself, the unvaccinated, and his maskless constituents for Florida's dire escalation of Covid cases, Covid hospitalizations, and related Covid deaths.

WE ARE JUST COLLATERAL DAMAGE

According to the U.S. Centers for Disease Control and Prevention., Florida's COVID-19 hospitalizations rose to record-breaking levels for six consecutive days last week, setting a new high for the disease.

Whether you are a resident or a tourist visiting the Sunshine State for a family visit or vacation, your well-being, and level of mortality risk are in the hands of Ron DeSantis and direct opposition to common sense and CDC protocols.

The United States Centers for Disease Control and Prevention, Florida registered a worrisome 157,388 new cases between August 2 and August 8, increasing the state's total number of cases to over 2.8 million, an all-time high. 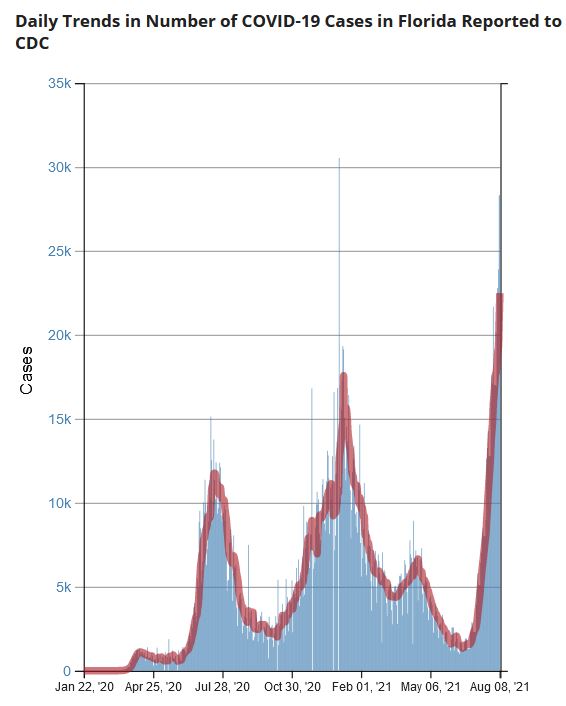 In the same period, 791 additional fatalities occurred, bringing the total number of deaths to 39,934.

As the new delta form of the illness spreads like wildfire throughout the state, health authorities have observed a fast rise in severe infections among youngsters, even though this age group was previously thought to be at the lowest risk of catastrophic consequences from COVID-19.

Yesterday we learned that Norwegian Cruise Lines had obtained a decision enabling the firm to appeal Governor Ron DeSantis' statewide prohibition on companies mandating vaccinations before participating in certain activities. DeSantis threatened the cruise industry with $5,000 fines for each person who sailed "harassed" into following COVID common sense.

It enables the business to operate with 100% vaccination coverage or without requiring all passengers and crew members to be vaccinated as a condition of sailing from Florida ports. Under what other time in U.S. history has U.S. businesses been needed to go to court to protect their employees and customers from a deadly virus when the government's very own mandated protocols say the business is in the right.

Florida's children are not being excluded from this madness. Yes, Florida state officials, the same ones we elected to protect us, reportedly threatened to withhold the salaries of superintendents and school board members who fail to comply with Governor Ron DeSantis' mask mandate ban.

Florida Gov. Ron DeSantis lashed out at a reporter this week for asking if masks might help keep children safe in a state that now has more Covid-19 hospitalizations, including pediatric patients, than any other state in the country.

He cited President Biden's alleged failure to rein in the virus's spread across the border after the president suggested that governors such as Mr. DeSantis should either "assist" in the fight against the coronavirus or "get out of the way." And he lauded a new state rule, adopted on Friday, that will counter local school mask mandates by allowing parents to request private school vouchers if they believe their child's public school is inadequate.

Last spring, the governor reopened his state's economy. Despite coronavirus outbreaks that clogged hospitals, he kept it open and then rejoiced when a statewide vaccination program took root and life in Florida returned to normal.

Mr. DeSantis is now gambling once again. This is not a hedge based on science; this is outright gambling with children, teachers, school administrations, nurses, counselors, bus drivers, cafeteria workers, and maintenance workers' lives.

A fresh viral outbreak has resulted in a record number of Covid-19 hospitalizations, wiping out some of Florida's economic and public health benefits and raising the stakes for Mr. DeSantis once again.

Suppose the latest surge overwhelms hospitals, preventing doctors and nurses from adequately caring for the younger. In that case, with almost entirely unvaccinated people crowding emergency rooms and intensive care units, Mr. DeSantis' position as the Republican Party's front-runner with loftier ambitions could be jeopardized if there is not a miracle to substantiate his reckless policies.

On the other hand, if Florida survives another viral peak with its medical system and economy intact, Mr. DeSantis's game of chicken with the fatal pandemic may serve as a model for coexisting with a virus that is unlikely ever completely to disappear.

He is opposed to requiring vaccinations for hospital employees, claiming that doing so will exacerbate personnel shortages.

"We can either have a free society or a biological security state," Mr. DeSantis said this week in Panama City, Florida.

Individuals will be free to make their own choices." Florida has the highest hospitalization rate and the second-highest rate of recent cases, behind Louisiana.

Infection rates have been increasing throughout the country, with particularly alarming numbers in the South.

Numerous governors have likewise been hesitant to impose additional limits or mandate the use of masks.

Hospitalizations and fatalities are much lower than they were in the past, in part because 80 percent of Americans aged 65 and older are completely immunized.

Although death rates in Florida have stayed much lower than at previous peaks, mortality statistics may trail cases and hospitalizations by weeks.

"No one knows where this is going to end," said Dr. Marissa J. Levine, head of the University of South Florida's Center for Leadership in Public Health Practice.

As his administration did, Mr. DeSantis has claimed that emphasizing vaccines for elderly adults has helped decrease the death toll.

Likewise, the availability of therapies for some patients, such as monoclonal antibodies, has increased, as Mr. DeSantis promoted throughout a portion of this week.

Around 49% of Florida people are completely vaccinated. Approximately 59% have gotten at least one dose, comparable to the national average and much higher than most other Southern states.

Mayors enforced them locally a year ago; although a new state law bans them, some towns have restored mask requirements in government facilities and required vaccinations for workers.

Mr. DeSantis' first declaration of a state of emergency to address the epidemic expired in late June. He has rejected demands to reinstate it, even though it would simplify hospitals to employ more physicians and nurses.

In short, Mr. DeSantis said, life would continue uninterrupted by the epidemic.

"We knew this would be something you would have to live with," Mr. DeSantis said on Friday, expressing a view shared by a growing number of public leaders, both publicly and privately, as the epidemic enters its second summer.

Mr. DeSantis' opposition to additional requirements, including youngsters returning to school who are too young to get vaccinations, sparked a testy exchange with Mr. Biden this week.

The governor accused the president of "facilitating" the spread of the virus by failing to secure the U.S. border with Mexico.

"Until you accomplish that, I do not want to hear another word from you about Covid," Mr. DeSantis said.

Democrats have attacked the governor, accusing him of being reckless and attempting to transfer responsibility for the pandemic's management.

Mr. DeSantis, who is up for re-election next year, has already exploited the president's back and forth COvid-19 bantering in his fund-raising appeals.

Later, he criticized "media hysteria" about the growing number of Covid cases and minimized the grave situation in hospitals — despite the Florida Hospital Association's warning about overcrowding as a consequence of the virus.

"Hospitals are now reducing any non-emergency procedure services that may be planned and postponed," said Mary Mayhew, president, and chief executive officer of the organization.

She previously worked for Mr. DeSantis' administration, where she oversaw nursing facilities.

"They're doing this to reallocate staff" to Covid-19 cases, she said.

Memorial Healthcare System in Broward County, north of Miami, has been of special concern.

Typically, the hospital system cannot care for more than 1,400 patients at any one time.

Memorial hospitals were obliged to create space for beds in a cafeteria, a conference center, and an auditorium due to the influx of ill patients, Chief Medical Officer Dr. Marc L. Napp stated at a press conference.

"I'm pleased to report that we have been able to deliver that care so far, but it has placed a strain on the system," he added.

Four conferences have already canceled their intentions to gather in Orlando, according to Orange County Mayor Jerry Demings, resulting in a roughly $44 million economic effect.

According to state and municipal authorities, stories about overcrowded hospitals and the more infectious Delta strain have prompted more individuals to be vaccinated.