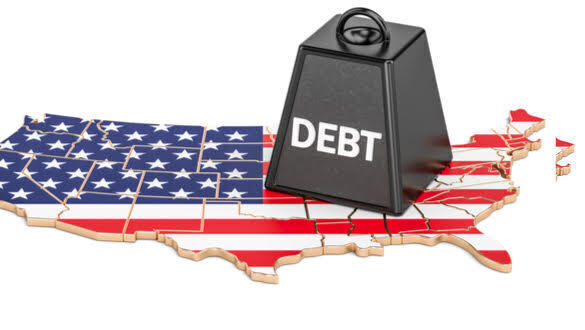 On January 19, the United States is projected to reach its debt ceiling, prompting a possible discussion in Congress on how to avert a default. No matter what the Federal Reserve and the Treasury do to mitigate the effects of a default, it will nonetheless cause significant market disruptions and pose serious dangers.

Wall Street economists and political futurists are warning that a persistent source of party posturing in 2023 might tilt into utter disaster as the United States approaches a technical limit on how much debt it can issue.

Foreseeing when the United States, which borrows money to pay its current payments, would run out of cash is a hot topic among big investors and bank economists, and they're employing financial models to do just that. The potential consequences of defaulting on the country's debt, in which the government cannot pay certain bondholders, are being evaluated. They are using simulations to determine how to best deal with the uncertainty while maximizing the potential benefits.

The urgency of preparing for a debt limit breach was highlighted last week when Treasury Secretary Janet L. Yellen informed Congress that the United States would approach its borrowing limit on Thursday. By June, Treasury will have exhausted its "exceptional measures" to maintain the country's spending below the limit for as long as possible.

A simple majority vote in both the House of Representatives and the Senate is necessary to remove the cap that Congress has placed on the amount of debt the government is allowed to issue. This limit, currently set at $31.4 trillion, needs to be raised to make it possible for the United States to take out loans to meet the financial commitments it has already made. These financial commitments include funding for social safety net programs, national debt interest, and troops' salaries.

The debate over whether or not to increase the limit on the amount of money that may be borrowed has become an annual tradition, and it seems like this year will be especially contentious. The Republican Party only has a razor-thin majority in the House of Representatives, yet a relatively quiet but influential element within the party successfully changed the rules that govern how parliamentary discussion is conducted. They have made it quite apparent that in return for lifting the debt ceiling, they want significant reductions in expenditure, and their empowerment may make it more likely that this round of discussions will result in a catastrophe.

This week, analysts at Bank of America wrote in a note to clients that a default in late summer or early fall is "likely," while analysts at Goldman Sachs said that the possibility that the United States government would not be able to make good on its bills is a "greater risk" than it has ever been at any time since 2011. During that particular incident, when the country was on the verge of bankruptcy, its credit rating was lowered, and the huge fluctuations in the market helped to persuade politicians to give in.

Because even the slightest hint that they will bail out warring politicians could reduce the incentive for lawmakers to reach a deal, the Federal Reserve and the Treasury in Washington are not publicly speaking about what they could do if an outright default were to happen this time. This is due in part to the fact that a complete default would be the worst conceivable consequence in this situation. They do, however, have a number of choices, though unfavorable ones, for lessening the tragedy if the political gridlock brings the country to or beyond the edge of defaulting on its debt.

However, retired government officials and wary Wall Street watchers warn that the consequences may be far-reaching. Since 2011, the markets have become larger and more sophisticated, and default may trigger a huge exodus of investors, disrupting the economy. The government may have prepared for a default, but according to ex-officials, such plans aren't sufficient to prevent a catastrophe.

If discussions are unsuccessful, analysts at T.D. Securities believe it is probable that the credit rating on U.S. debt will be cut, which may cause some investors to become nervous. The debt of the United States was downgraded in 2011 by S&P Global Ratings, while other major rating agencies continue to give the nation its highest score. In the event of a default, they also anticipate that investors would move their money out of riskier assets like equities and into safer investments such as Treasury bonds.

Short-term government bonds, also known as bills, experienced a precipitous decline in value in the month leading up to the increase in the debt ceiling in the summer of 2011. This resulted in a sharp increase in the yield on these bonds, which is indicative of the cost of borrowing money for the government over the next three months. The value of stocks went down, but the yield on the 10-year Treasury note went in the other direction. This was due, in part, to the fact that investors continued to see the 10-year Treasury note as a secure location to put their capital.

On the other hand, there was no real default in 2011. The United States has only ever been late on a payment once, in 1979; however, this was after an agreement had already been reached and was due to a technical fault.

Some investors have started to investigate their options for protection in the event that the United States defaults on its obligations. A trader at BNP Paribas recently offered certain investors pricing for U.S. credit default swaps. These swaps give some protection in exchange for a tiny fee, paying out any money investors lose due to the government failing to pay them on time. The price of these futures has been progressively rising over the last six months, which suggests that there is a bigger possibility of a debt limit violation, although one that is still quite low. Due to the low likelihood of failure on American debt, a price list of this kind is uncommon. As a result, interest rates on debt protection are often rather low.

A similar crisis occurred not too long ago. In 2020, at the start of the coronavirus pandemic, investors swiftly liquidated several forms of government debt, setting off a chain reaction of asset dumping. The chaos that ensued was only contained by intervention from the Federal Reserve.

If the debt ceiling issue causes another market calamity, the Fed might step in and prevent more harm. Transcripts from meetings between 2011 and 2013 show that central bank officials prepared for a potential default.

An inability to exchange bonds that have seen their value drop because the government stopped making payments is a real possibility. The Federal Reserve has a few options for removing defaulted Treasury bonds from the financial system, which might mitigate the impact of these bonds on the economy. According to the transcripts from 2011, the bonds may be used as security in transactions involving government debt.

Additionally, in 2013, members of the Fed's staff proposed that the institution buy defaulted Treasury bonds or exchange them for more stable debt to maintain market stability.

Debt ceiling negotiations might go with less friction if the Fed is able to limit the economic consequences. However, doing so would force the hitherto nonpartisan central bank into the middle of the political debate. Further, the Fed's present strategy of lowering its bond holdings would risk its independence to pursue its own policy aims, most notably stable prices, if it were quickly reversed to preserve the larger government.

The Department of the Treasury is also able to staunch the bleeding. Placing a higher priority on payments has been brought up in past fights over the debt ceiling, and lawmakers may attempt to push for it. Bondholders would be repaid first, which might perhaps prevent a market collapse.

Prioritization, however, may provide some challenges, both practically and politically. Mr. Lew has said that the government cannot swiftly and surgically modify who gets checks due to the imprecision of the payment distribution mechanisms. He continued by saying that if the Treasury succeeded, the resulting trade-offs may be very difficult for government employees, who could have to choose between paying financial markets or disability rosters or health care systems.

According to Mr. Lew, "it's an unjustifiable universe of opposites."

To maintain paying the bills, the Treasury is frequently urged to explore alternate options, such as minting a $1 trillion coin and depositing it to the Federal Reserve, taking advantage of a legal loophole.

Mr. Singh, a former Treasury officer at PGIM, stated, "It's being considered seriously." This refers to the proposal to issue coins. Instead, the government would be left to rely on "silly gimmicks and cheap legal methods, and that's just marginally better than the default."

Investors may lose trust in the U.S. government even with temporary bandages, resulting in increased borrowing costs for the country.

U.S. expected to hit debt limit this week. What happens next?